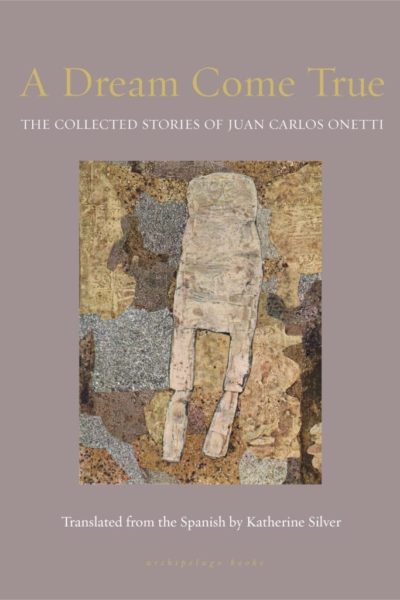 Juan Carlos Onetti’s writing has the remarkable capacity to leave readers simultaneously despondent because of its insight into the darkest corners of human emotion and in awe of the beauty uncovered during such a desperate exploration. In this volume of his collected short stories, Onetti is macabre, but never gory; his fictions are concerned with everyday life, but literature and the act of writing are also central themes. The reality Onetti describes in his writing is almost identical to ours. You won’t find any magic or fantasy, and there is not the slightest hint of the exotic Latin American settings some readers may expect. Instead, these stories take place in enclosed rooms in asphyxiating cities and dirty bars whose dinginess does not mask any hidden charm. Onetti’s characters are jaded outsiders, completely alienated from their environments, forced to confront the apparent lack of meaning in their lives at every turn. In “Welcome, Bob,” the transition from optimistic adolescence to cynical adulthood is personified by two antagonists who share a complicated past and happen to frequent the same cafe. In the titular story, “A Dream Come True,” a seemingly disturbed woman pays washed-up actors to reenact a haunting dream in which she briefly felt true happiness.

In Onetti’s universe, everything that makes living easier is stripped away. Jobs are unfulfilling, God is absent or indifferent, and love has either already turned sour or will inevitably do so very soon. However, this environment is not born of nihilism, but rather of a profound humanity—a belief that the answers to life’s questions cannot reside in constructions that abdicate responsibility from the individual.

It is perhaps this rawness, combined with some radical formal experiments in his novels, that has kept Onetti somewhat sidelined in comparison to authors like Gabriel García Márquez and Mario Vargas Llosa. Onetti, slightly older than the Latin American Boom writers whose work popularized the region’s fiction abroad, saw his final years marked by intense isolation. He was confined to an insane asylum for three months for defying the Uruguayan dictatorship in 1974 and spent most of his subsequent exile in Madrid in bed, drinking and smoking. If you watch interviews with Onetti online, you will find a shy, sardonic old man having excruciating conversations with increasingly irritated and perplexed television hosts.

Onetti’s primary literary legacy is the construction of Santa María, a fictional provincial backwater somewhere between Argentina and Uruguay where much of his fiction takes place. Santa María is a particularly interesting setting because it is a self-consciously created fiction invented by the protagonist of Onetti’s 1950 novel A Brief Life. In the novel, Juan María Brausen, a down-on-his-luck ad man spiraling into depression after his wife’s mastectomy, writes a movie script that takes place in Santa María. An extraordinary turn comes towards the end of the book when Brausen arrives in Santa María while fleeing from the police and encounters the world he created. Future novels and short stories take place in the city, and Brausen slowly fades into the background, leaving behind a rusting equestrian statue in the town plaza and occasional references to him as a sort of demigod. Not all of the stories included in this collection take place in Santa María, but some of the best do; “Jacob and the Other” and “The Kidnapped Bride” are fantastic introductions to this stagnant town, where Onetti’s characters are locked into obsessive rhythms and teeter on the edge of madness.

In addition to his bold decision to write about a fictional city where very little actually happens, Onetti is an underappreciated innovator of language.  His style is bracing, but never clunky. His use of adjectives is staggering—a frightened suitor hits the same piano key again and again with “fierce cowardice;” in Santa María “it was autumn, with just a touch of the bright sweetness of a moribund, punctual, slowly extinguishing sun.” It would be difficult to find a better pure stylist anywhere in the Spanish language. Add that to a knack for memorable, highly idiomatic titles, and any translator is faced with a stern test. Katherine Silver’s rendering of Onetti necessarily struggles with these challenges, at times feeling archaic and overwritten. For example, in “A Dream Come True,” a theater director strangely exclaims “Alas, ma’am,” when a more contemporary translation would have sufficed. However, Silver generally transmits a good sense of the author’s idiosyncratic style and, by translating all of Onetti’s short fiction into English, has done readers a great service. The monumental scale of this collection, at well over 500 pages and including more stories than many popular editions in Spanish, is astounding and deserves applause.

Although Onetti’s major novels have already been translated into English, albeit in modest editions with translations of dubious quality, Silver’s efforts will hopefully be a first step towards a broad rediscovery of this author. At a time when Latin American artists are reacting to widespread political violence across the region by rejecting fantasy and whimsy and being justifiably suspicious of totalizing, grandiose projects, it is only proper to look back to Onetti, an intensely skeptical writer whose structural innovations never got in the way of his fundamental task: reacting to life, reconstructing it in writing, peeling away the superfluous, and uncovering the essential.