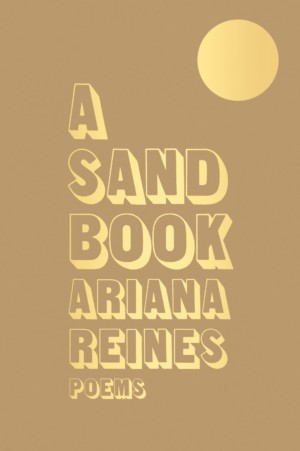 “I say what I see / This is my power,” writes Ariana Reines in the poem “Thursday” from her visionary fourth collection, A Sand Book. Reines follows “sand”—the word as well as the substance—through several environmental, collective, and private disasters: Sandy Hook, Hurricane Sandy, Sandra Bland, and her mother, also called Sandra. With as little ability to control the heartbreak surrounding her mother (who in “Inner Life” is “being evicted again”) as she has over the chaos caused by Hurricane Sandy, Reines asks us to view the world as a place that sneers at human grief and considerations. Have we collectively passed the point of no return? Have the gods finally turned their backs on us? “I expected the world would respond to my thought / I had seen some ads,” she writes in “Confessional Poem.” But the world remains largely indifferent, and the “ads” offering redemption are peddling false promises.

Like Reines’s earlier collections, the poems in A Sand Book examine the relationships between the female body, intimacy, technology, and pornography, but the mood here is far darker. Many of the poems meander, recalling early John Ashbery poems such as “Clepsydra” and “The Skaters.” Others are succinct and precise. All have a gnostic quality produced by a pervasive feeling of dislocation, alienation, and exile—the feeling that one can never fully belong in this world, or even inside one’s own mind. The inner life, the bedrock of art and poetry, is being colonized by the endless technological and psychological demands of our hyper-capitalist era. In “The Saddest Year of My Life,” the speaker, in a desperate situation, finds herself “crouching over [her] phone / waiting for it to tell [her] what to do.” But neglecting an inner life that is too difficult to face or, alternately, living in a world that simply fractures attention to the point that the inner life can’t survive only results in a new form of psychic misery. Why, for example, is the speaker sending tweets about Duke Ellington when her mom is being evicted? By the end of the poem, her response is simply to put her device back in her pocket and keep walking. Walking into what? Probably more of the same.

The journeys—physical and psychological—described in A Sand Book are difficult and painful, but they are punctuated with humor. In “Hegeling Before the Glass,” for example, Reines writes about the “Logic of the world robbing you of your boner.” The speaker of “Open Fifths” declares that “I just watched a Tony Robbins video / You may judge this a counterrevolutionary gesture.” The speaker moves through scholarly interests as rapidly as she does through continents, giving the book a nowhere-to-run feeling: “I had studied the Dust Bowl, the architecture at Delphi, Judaic & Islamic legends of Moses, Midianite theology, the History of Haiti, Aryan horseman of ancient Iran, the collapse of Sumerian agriculture, Kundalini yoga, Allan Savory’s & competing theories on desertification reversal …” The catalog continues, yet the speaker’s studies do not bring her closer to an adequate response to our present moment. Not that she ever really thought they would: “There are things not found in books / or perhaps you have been reading the wrong ones.”

No matter where the speaker of A Sand Book travels, she is bleeding. In “The Long Love That in My Thought Doth Harbor,” she bleeds through her cutoffs on the way to Safeway. In “Nine Moons,” she says, “Apparently, I have a body that produces a lot of blood.” Sometimes the blood that pours from her body assumes Biblical proportions: “I can see the Red Sea / it drains inside me / It parts.” This bleeding, which spans the first few hundred pages of the book, culminates in a final section called “Mosaic,” in which Reines transforms the outpouring into something like bliss and rapture. The first part of this section is in prose, and visually distinct from the rest of the book; it is printed in white text on black pages. It recounts a spiritual transformation that took place on Delancey Street in New York City on October 14, 2014. Reines notes that the language she uses is not her own—she is transcribing words that came to her from the sun—and the text of this psychic awakening is written from right to left, “like some parody of a Hebrew prophet.” In its second section, “Mosaic” takes a dark turn with the appearance of a “tenured creep” whose sexual harassment towards the speaker is as awful as it is predictable. This trauma leads to her descent into a silence which grows and becomes “voluptuous.”

The prose then turns into around thirty-five pages of centered aphoristic statements, one per page, such as “OUR SOLAR SYSTEM IS ANALOGOUS TO THE UNIVERSE” and “THE REASON GREAT ART MATTERS IS / SEE AS I SEE.” At times, these utterances feel like a parody of the language of self-help, astrology, and self-actualization. Are these the kinds of affirmations we seek for direction and comfort as we try to find our way in contemporary culture? On the final page, we get, “EVERYTHING HAS A NATURE / FIND OUT YOURS.” Here we see the point where the language of spiritual purification blends into the language of PR and advertising: the short, easily consumed bites of information that dominate the language of our era. Is this what it means to be colonized from within? A Sand Book asks us to consider the frightening possibility that the purifier is the contaminant.