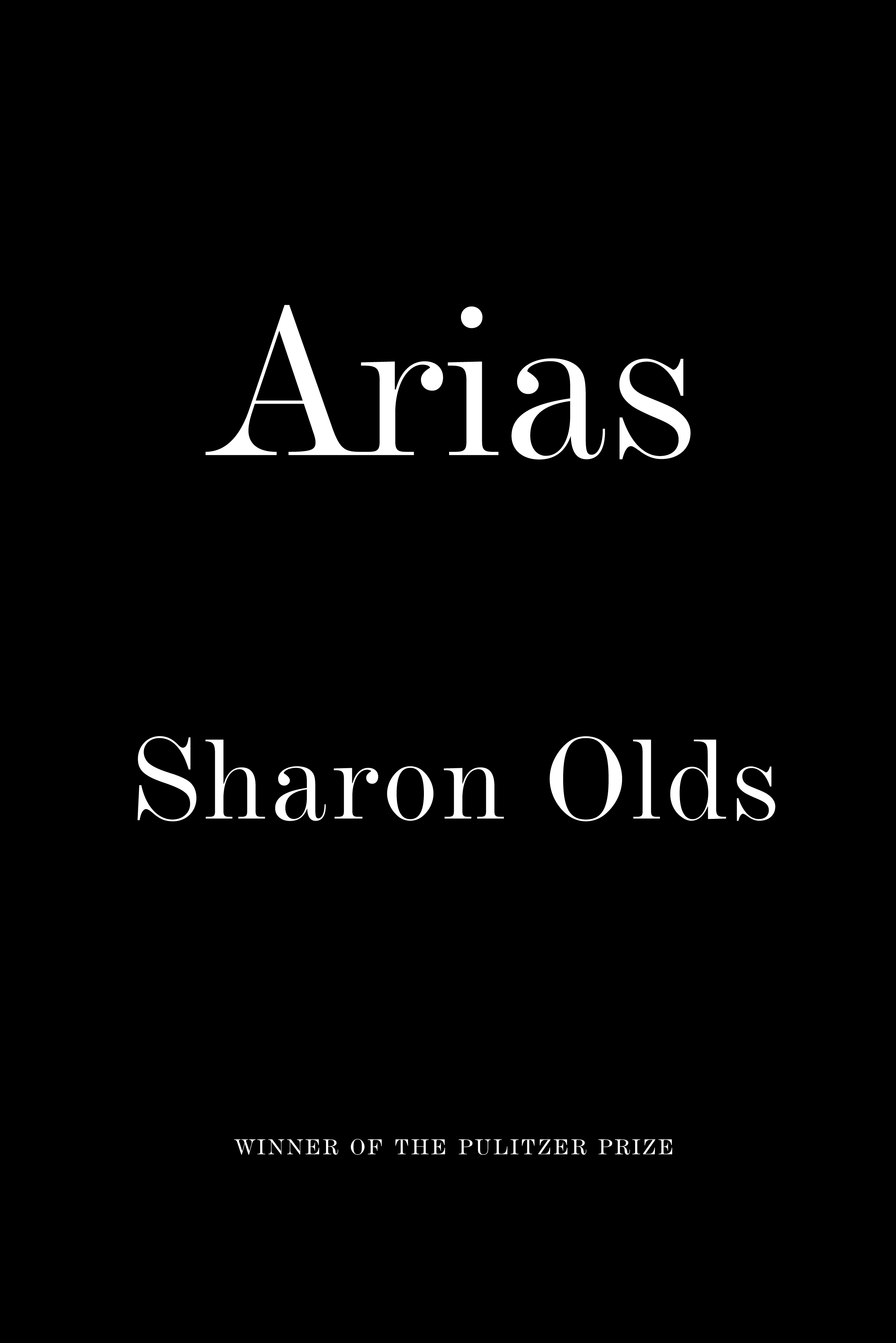 Sharon Olds takes the title for her latest collection of poetry from the language of music. The word “aria,” with roots in “air,” refers to a self-contained piece of song for one voice within a larger work, signaling a deepened attention to the individual as well as the dynamism and movement of exchanging, alternating parts. The poems of Arias are similarly dynamic: they’re vibrant and energetic, precise in their detail and focus but wide-ranging and expansive.

This, Olds’s fourteenth poetry collection, was shortlisted for the 2019 T. S. Eliot Prize, which her 2012 Stag’s Leap won. Olds has earned a slew of awards and honors, including a Pulitzer Prize (for Stag’s Leap), a National Book Critics Circle Award (for her 1983 The Dead and the Living), and the Academy of American Poets Wallace Stevens Award. The poems of Arias address topics and crossroads central to Olds’s poetic project: aging, femininity, the body, sex and sexuality; childhood, motherhood, family; identity, self-awareness, violence, and love.

The first poem in the collection,“For You,” begins with a simple morning routine and ends in mourning, with an address to Trayvon Martin, “our youngest, our most precious,” for whom “song was / invented,” for whom “all art was made.” This is followed by “Looking South at Lower Manhattan, Where the Towers Had Been” and “Meeting a Stanger,” both concerned with questions of personal responsibility, complicity, and the crossing of lines. In “Meeting a Stranger,” Olds imagines that the space shared by the speaker—who identifies herself as a “WASP”—and an African American hotel employee is also a space for “the history of human evil, / and the shame, in me, that someone I could be / related to, could have committed,  / against someone you are related to, some / horror.” The poem ends on a “question, alive—would I have risked harm / to try to protect you” or “would I have stood / aside”—which it doesn’t—or can’t—answer.

“Looking South at Lower Manhattan, Where the Towers Had Been” invokes a “we,” a “someone,” a “you,” an “I,” and a “stranger,” drawing out the complicated, collaborative-but-sometimes-combative relationships between individuals and language itself. It opens with a directive:

If we see harm approaching someone—
if you see me starting to talk about
something I know nothing about,
like the death of someone who’s a stranger to me,
step between me and language. This morning,
I am seeing it more clearly, that song
can be harmful, in its ignorance
which does not know itself as ignorance.
I have crossed the line, as the line was crossed
with me. I need to apologize
to the letters of the alphabet

And it ends with a sense of progress, though again, not one of resolution. The poet remains a potential perpetrator of harm, but also becomes a protector: “I am singing, I am singing against myself, as if / rushing toward someone my song might be approaching, / to shield them from it.”

In many ways, the concerns of these first three poems foreground and frame the book. They, like many of the poems in this collection, are presented as (or involve) conversations, and the sense that Aria‘s poems have an addressee or many addressees is one of the major strengths of the collection. Especially in the wake of Olds’s 2016 Odes, whose form and titles (“Ode to Hymen,” “Ode to the Tampon,” “Ode to Stretch Marks,” “Ode to Dirt”) often suggest a generality of topic and a platitudinal sense of theme, reading the critical and complex considerations of roles and rights in Arias is insightful and rewarding, as is the renewed focus in Arias on the individual figure.

In the opening poem of the “Arias” section, the address takes the form of an “Aria to Our Miscarried One, Age 50 Now.” Here, the speaker converses with her miscarried child: “Once again, I turn and address you, / not knowing who you were or what / you were.” The poem speculates on the “mystery” of the miscarriage: “Hello, male, or female, / or both, or neither. Hi mystery, / hi matter, hi spirit moving through matter.” There is a sense of beginning in the greetings (hello, hi, hi, hi) and a persistent present tense throughout the poem, which complicates and intensifies its elegiac quality:

[ … ] Dear one, I feel
as if you’re my elder, you having departed—
though without having breathed—much earlier than I.
By the time I saw you, you were back in the ocean
already, the sacred toilet-water green
of your grave, Let me call you kin, lost one,
let me call you landsman.

Olds continues to employ this directness in the more straightforward elegies of the book’s fifth section. The speaker of “Her Birthday as Ashes in Seawater” closes the poem with an invitation:

[ … ] Oh, Mom. Come sit
with me at this stone table at the bottom
of the Bay, here is a barnacle of
egg custard, here is your tiny
spoon with your initials, sup with me
at dawn on your first day—we are all
the dead, I am not apart from you,
for long, except for breath, except for
everything.

The collection’s multiple elegies to Galway Kinnell, a close friend and colleague of Olds who passed away in 2014, are similarly conversational (“Galway, I’m glad / you were buried whole–as little of you as was left, / it was all of you there was”).

At over two hundred pages long, and with more than one hundred and twenty poems, Arias is an enormous undertaking, and the range of topics Olds addresses with care and curiosity is impressive. Ultimately, this collection considers what Olds terms (in “First Breath”) the “human work” of living and dying. “First Breath” charts not only the emergence of a newborn child into the world—her beginning as a “mattery / idea” and her “opening into the new being”—but also how from her very first breath, “she / is on her way, now, to that ending.” It’s this tension Arias faces: balancing “between nothing and nothing—between everything / and everything.”