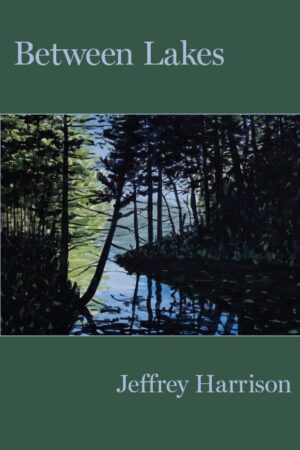 Jeffrey Harrison’s beautiful seventh book, Between Lakes, is largely about his father’s death and how we live with the dead. It contains lovely elegies and poems of straightforward grief and mourning, but it’s also keenly aware of how our beloved dead continue to inhabit us. We feel their presence more at certain locations (“Oxbow”), or while doing certain activities (“Thinning the Spruces”). We find ourselves speaking their words (“Yard Work”), handling their left-behind clothes (“My Father’s Sweater”), dreaming about them (“Double Visitation”), or thinking about them on anniversaries or at certain times of the year (“Father’s Day”).

Harrison has already led a long and distinguished career in poetry. His first book was chosen by James Merrill for the National Poetry Series in 1988; he has won numerous awards and fellowships since then (his previous book won the Dorset Prize); and his writing has been featured in such venues as Best American Poetry, Pushcart Prize Anthology, and American Life in Poetry. In Between Lakes, then, we find a poet at the height of his powers exploring how our relationship to our dead is not fixed but ongoing, as are the disagreements, unspoken tensions, and arguments that we had with them in life.

However, death has changed these tensions in that now the living must play both roles. In “Politics of the Dead,” Harrison writes about the acrimonious political debates he would have with his conservative father, and about how, when his father died, he left Harrison “a dozen or so right-wing / articles [ … ] snipped out / of newspapers [ … ] as if even in death he needed to get / the last word in.” Harrison then dreams of another political argument with his father:

“I can’t believe you want to keep
this argument going even after
you’re dead.” Then, as I lay there
awake in my bed, I realized that,
because the dream was mine, I
was the one who hadn’t let it go—
and from here on, it was mine alone.

There’s a way in which the dead always get the last word in. If we had persistent disagreements with them in life, we may be left with a rebuttal sputtering on our lips with nobody to speak it to, having to face the fact that some part of us needed and still needs that argument.

Between Lakes beautifully captures this post-elegiac dynamic of the poet’s ongoing arguments with and ambivalence toward his dead father, whom he also very much loved. This is a father who would shame the poet as a child, flinging back his sheets after he wet the bed, exposing “the sour odor of my worthlessness.” But this is also a father who put his child to sleep each night by reading him stories, while the child, lulled by the “unfamiliar drone” and “mesmerizing voice,” rested his head on his father’s chest (“The Same Father”). There’s love here, but also “unspoken” tensions that build up “like thunderheads” (“How it Worked”), and the poet compares “our feelings about each other” to a rock in the driveway they try to dig up: “nine-tenths of it was below the surface, / and it wasn’t going to budge” (“Yard Work”).

If death erases any possibility of speaking directly with his father about these unearthed tensions and feelings, and if it leaves the poet arguing both sides of the conversation in his dreams, in Between Lakes it also offers the possibility of disruption, of shaking the poet out of his habitual knee-jerk relationship with his father, “stuck / in a rudimentary pattern of / defining ourselves as opposites” (“Higher Education”). If his father lives within him now—if he wears his father’s sweater and hears his dad’s words coming out of his mouth—his pent-up mix of love and grievances can only be explored and relieved internally and via poetry, instead of externally via spoken argument.

And poetry offers the opportunity to be less reactive, more generous, thoughtful, and self-doubting. Harrison uncovers and faces up to his own complicity in perpetuating the “rudimentary pattern” of clashing opposites, and his own need to carry on the argument after his father has died. But he also tries to see things from his father’s perspective: remembering in “Kitchen Incident” how his father insulted and grabbed at him after he made a fire and forgot to open the chimney flue, he sympathetically imagines his father’s pent-up “frustration / at ceaselessly battling his acerbic teenage son.” “At long last,” the poet writes, “I [ … ] can let go of my indignation” and look back “to see him standing there / bewildered and alone in that smoke-clogged room.”

Harrison also searches out moments in which he and his father overcome their disagreements to find moments of accord (shooting a slingshot together, or clipping his father’s toenails and soaking his feet once he’s sick with cancer). These moments are moving because they feel exceptional, like small moments of grace for both father and son when they managed to be better versions of themselves, even if only briefly and temporarily.

At the same time, Harrison does not hide his father’s flaws or sugarcoat the tensions in their relationship:

at any moment he might blurt
one of the remarks that made me
unable to breathe, much less speak,
like I’d bitten into an electric fence.

But if elegy does the work of mourning and healing, Between Lakes does something even rarer: it shows us what honest yet generous engagement with dead family members might look like. And it shows us how we might sidestep our customary quarrels so we can approach our dead loved ones with less rancor and more understanding. For that, at least, it may not be too late.