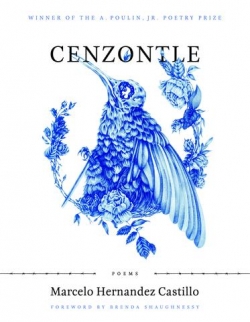 One might imagine Marcelo Hernandez Castillo’s debut poetry collection, Cenzontle, as a paradisiacal river valley with its lush tangle of flowers, birds, honey, fruit, and origin stories. Unlike the biblical Eden, however, this paradise is not a utopia within which an omnipotent deity draws forth life through the binary oppositions of male/female, light/darkness, and land/water. It is instead a liminal space of constant change, being continually made and unmade through both miracle and trauma: people drown and then change their minds. A man dying of cancer from exposure to agricultural pesticides becomes a flock of birds. A child becomes a pile of glass, then a bell.

The collection, selected by Brenda Shaughnessy as the winner of the 2017 A. Poulin, Jr. Poetry Prize, expands across the page in lines and strophes of various lengths that initially appear as if in fragments. As the book progresses, however, the less these lines resemble fragments of erasure or censure, and the more they come more closely to resemble a network of rivers. Themes and images spring up, run underground, disappear, and then overflow elsewhere in the book.

Hernandez Castillo himself is familiar with liminal spaces: he was born in Zacatecas, Mexico, and immigrated with his parents to the central valley of California when he was five years old. He was the first undocumented writer to graduate from the University of Michigan’s Helen Zell Writers Program, and along with Javier Zamora and Christopher Soto, he cofounded the Undocupoets campaign, which eliminated citizenship requirements from all major first poetry book prizes in the US. His poems slip lyrically between Spanish and English, not so much crossing boundaries between languages as dissolving them:

Still, I don’t know what country
does death belong to.

My skin is peeling.

As Hernandez Castillo crosses borders and dips in and out of languages, mythologies and domestic scenes, the reader is reminded of the queer Chicana poet and theorist Gloria Anzaldúa’s Borderlands/La Frontera. D.A. Powell’s blurb points out that Hernandez Castillo also walks alongside Whitman, in their mutual containment of multitudes; tellingly, Cenzontle, the Spanish word for mockingbird, comes “from the Nahuatl word centzuntli, which refers to one who holds 400 voices or songs.” Hernandez Castillo echoes the Whitman who proclaims, in “Song of Myself,” “I too am not a bit tamed, I too am untranslatable”—untranslatable not because of language barriers, but because the self resists fixity. To encounter the untranslatable in both Whitman’s and Hernandez Castillo’s work is to recognize the inherent fluidity of personal identity and of the US itself. Hernandez Castillo’s poems do not so much dismantle binary oppositions, but rather dissolve the boundaries between them:

We can both be the bride,
we can both empty our lover.

Yes, I could have ripped open his throat.
I could have blown him a kiss from the curtain.

Cenzontle reveals a river-like flow of trauma between generations, and the ways in which we revisit our past in order to make sense of ourselves. The poem “Sugar” reverts from the repetitive language of litany into an simpler, almost children’s-book-like dialogue:

Always the leather, always / my ass bleeding with welts—
my ass purple with love,

always / the belt he called Daisy.
And I said hello Daisy, / and she said hello.

Later in the book, “Daisy” reappears in “Miss Lonelyhearts” in a scene with a lover:

Beat me the way our parents did.
Put your belt in my mouth. Call it Daisy.
I will eat it.
I will make it come back to life.

Even though the acts of remembering and naming often transfer trauma, they also provide pathways for connection. “We want to be angry at something / that we could name,” Hernandez Castillo writes.

Many of the poems in Cenzontle appear in the form of a second-person address, often directed at the speaker’s lover or family member. The overall effect of the book, however, gives the feeling that these poems also address the reader. As Whitman does at the conclusion of “Song of Myself,” in “Fifteen Elegies,” Hernandez Castillo waits for the reader, exhorting her to find a possible means of connection:

Either praise the beautiful
or praise what is left over.

Choose the one that is most like a bridge.

Soak your hands and face in it.

The river-like configuration of Cenzontle recalls Heraclitus’s aphorism that one cannot enter the same river twice. The flowing water renders the river different in each moment, and yet, if the water were to stand still, the river would cease to be a river. Hernandez Castillo’s poems reflect a similar paradox. Once a man crosses a certain point in the Río Bravo as he travels from Mexico to the US, he becomes an undocumented immigrant, an other, even though he is physically the same person as before. Some Americans might argue that if we could just draw firmer boundaries or separate people into fixed categories of citizenship, we might make the US great again. But, as Hernandez Castillo’s Cenzontle shows, to be so reductive is to deny the great, constantly changing multitudes that exist among and within us all.