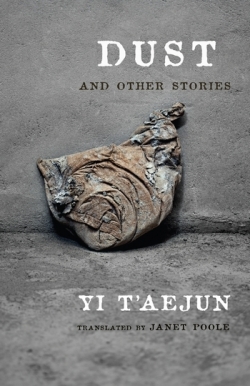 Dust and Other Stories

In the 1930s, Yi T’aejun’s charming stories about everyday Koreans made him one of the country’s most beloved writers. But with the onset of World War II, Yi went from a contemplative chronicler of the world around him to a political firebrand. He defected to the North in 1946, and subsequently his books were banned from publication in South Korea (a prohibition that would last 40 years). Dust, a new collection of Yi’s short stories selected and translated by the Korean scholar Janet Poole, offers a chronological survey of his life’s work to explain how so drastic a transformation came about.

Early on, Yi’s writing was decidedly sentimental, evoking both the simple beauty of the quotidian and his nation’s lost glory. In “Evening Sun,” an essayist named Maehŏn explores ancient ruins near the provincial city of Kyŏngju with a local antique seller. When they settle on an overlook, Maehŏn becomes so enchanted by the “bewitching dye” of light on the woman’s face that he “wrote a verse by the ancient poet Li Yishan,” (better known as Li Shangyin), on her fan: “the evening sun is beautiful beyond limit, but dusk comes all too soon.”

Such saturnine nostalgia stands in contrast to the historical reality of 1930s Korea as a colonial subject of an increasingly autocratic Empire of Japan. It’s not a far jump from wistfully recalling the past to resenting the present; for Yi, the process was sped along by such abuses as the 1940 shuttering of the Korean vernacular press. It’s an event that, in one story, leaves Yi’s oft-used alter-ego Hyŏn “bewildered and unable to hold himself together.” Poole’s thoughtful selection of stories charts the slow opening of the chasm between the writer Yi was and the one he would become, culminating in “Before and After Liberation: A Writer’s Notes.” Hyŏn is introduced here as an author who “subscribed to no particular ideology and had no previous convictions.” Yet, when independence comes, he is swept up into the internal divisions of a cultural council, vacillating between faith in the incremental approach of the US-backed interim government and impatience for immediate independence.

A few years earlier, Yi had written that “living submerged by the current of the age is like a spirit living beneath the water.” In “Before and After Liberation,” Yi seems intent on finally rising to meet that current. The change extends even to Yi’s sentences. Early in the story, Hyŏn’s wife pesters him about moving to the country to avoid the war-time excesses of the Japanese. He opines that “as long as they were under the Japanese sky, where would they find a village from the age of the sage kings Yao and Shun?” But once the war has ended and Korea has been liberated, the poetry is drained from the prose: “Hyŏn felt the urgency of establishing principles for the nation’s future based on unified action between Left and Right.”

“Before and After Liberation” was published the same year as Yi’s defection; by 1950, the degeneration of Yi’s work into propaganda was complete. In Dust’s title story, Yi imagines an antiquarian named Han sneaking across the 38th parallel in search of rare books, only to find that Seoul has become a desolate nightmare of corruption and the abuses of the occupying Americans. Memorably, he describes US airmen using the pages of university textbooks to clean their guns.

While the suffering of South Korea in the late ’40s was very real—the provisional government imprisoned tens of thousands of suspected communists—the portrait of the period Yi offers strains credulity when his antiquarian is met by a cyclopean American soldier, a “nine-foot giant” who “bent down over him like a totem pole, bringing a bolt of lightning down before the gaunt Han’s eyes.”

Yi’s career ended not long after he published “Dust.” He was exiled internally in North Korea in the mid-1950s, and the date and circumstances of his death are unknown. Poole’s introduction suggests that it was Yi’s wistful early stories that precipitated his fate—apparently no quantity of disdain for the American empire and its South Korean collaborators was enough to remove the suspicion of “bourgeois thinking” they drew. It was a pitiful end for a writer who had worked so diligently to meet the “current of the age.” Had he remained submerged beneath it, perhaps his early, melancholy stories might still be treasured as the gems they are. Instead, those stories may have cost him his life, and the style he exchanged them for reads now as little more than a historical curiosity.