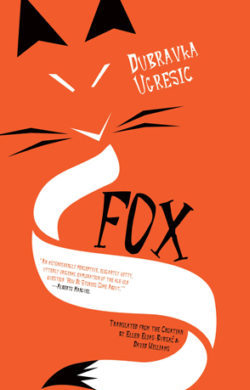 by Dubravka Ugresic, translated by Ellen Elias-Bursać and David Williams

Nowhere in the literary tradition is the practice of writing about writing stronger than in the Slavic one. The great masters—from Chekhov and Tolstoy to Nabokov and Leskov to Viktor Shlovsky—have expounded upon the ways that reading and rereading, and the act of writing itself, have vast repercussions on our perceptions of the world. In her new novel, Fox, our own contemporary Croatian master Dubravka Ugresic joins the metafictional party with a playfully kaleidoscopic representation of a writer’s world, where the competing forces of academia, family, travel, and love create a palimpsest of life and art.

Originally published in 2017 in Ugresic’s native Serbo-Croatian, Fox is the author’s thirteenth installment in a career praised for its masterful command of the wiles of European and Russian literature, as well as for her deft ability to toe the political line (she was harassed as “a witch from Zagreb” in 1993 and thus left Croatia). Her story and worldview keenly embody Charles Simic’s description of Ugresic as “a philosopher of evil and exile, and the storyteller of many shattered lives.”

“Shattered” is indeed a fitting phrase to describe Fox, which, despite being dubbed a “novel,” reads more like a novel-in-stories—or in essays, so often does the reader easily forget the thin line between author and character, reality and imagination. The book is broken into six sections, each describing an episode in the life of a young female academic and writer. Long stretches of introspective narrative are punctuated by lively travelogues that span from Italy to England, alongside picaresque anecdotes of real icons of the Russian canon. For example, Ugresic chronicles butterfly-hunting journeys taken by Nabokov, his wife, and their largely unknown driver (Dorothy, a Russian-language student of the master who volunteered to take them cross-country in the trip that was precursor to Lolita), and whose embarrassing self-exposure at the Grand Canyon resulted in one of Nabokov’s greatest discoveries. Ugresic also writes about the complicated histories of revolutionary minds like Boris Pilnyak and Doivber Levin and their connections to her own ancestry. If these figures’ names do not ring even the faintest of bells from your literature classes, you’re not alone—“footnotes” to literary history they are, and Ugresic (and her narrator) are on a quest in Fox to exhume them from their historical catacombs and understand their forgotten legacies.

These stories are inherently fox-y in disposition, for much of the chaos and suffering endured by the narrator on her escapades is the result of deceit and betrayal, both political and artistic. Quoting Pilnyak, the narrator first understands the mythical notion of foxes as animals of great doom: “The fox is the totem of cunning and treachery. If the spirit of the fox enters a person, then that person’s tribe is accursed. The fox is the writer’s totem.” Given the character’s status as a literary scholar and academic, and due to her first-person narration, it’s fair to interpret the book we read as something she has written—her perspective, more or less, on the world and on the text she engages with. So when she decides to write herself in such a way that resists any sense of grounding or acceptance of the status quo, she paints herself, and her textual worldview, as shifty, all-consuming, fox-like.

Indeed, some of the most engaging sections of the novel feel both wildly disparate and unexpected in their nature: on the one hand, they display her soberingly hilarious frustrations with the academic community at large, which harken to the work of Elif Batuman, and on the other, they include some of the most heartfelt and surprising writing about motherhood I’ve ever read, as in the chapter “Fox’s Widow”—surprising because it is an aunt, not a mother at all, speaking about her niece. She thus carefully walks the line between remaining inside the social norms of her world and upending them, a trickery that allows for poignant satire on the nature of identity.

By the end of Fox, Ugresic has convinced us that the act of navel-gazing can be universe-gazing; the stories she presents with such uncanny self-awareness are not a curse on her tribe, but rather the thing that allows us to better see the ur-story of our collective tribe, wherein the chronicles of our deceitful ways can be both unnerving and enlightening.