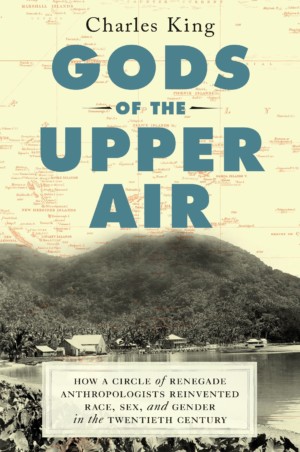 Gods of the Upper Air

In Gods of the Upper Air, Charles King departs from his field of political science to chronicle the birth of cultural anthropology at the start of the twentieth century, writing about the scientists who “found themselves on the front lines of the greatest moral battle of our time: the struggle to prove that—despite difference of skin color, gender, ability, or custom—humanity is one undivided thing.” While academically informed (the author provides fifty pages of sources), King’s writing is rich, filled with vivid descriptions that contextualize the era: “Gray cruisers, destroyers, and support vessels clogged the harbor. The surface of the water was an oily rainbow [ … ]. Airplanes screamed overhead. Below, a dozen Fords sputtered along a narrow concrete road.”

King’s focus is on the ethnologist Franz “Papa” Boas and the group of female anthropologists—Margaret Mead, Zora Neale Hurston, Ruth Benedict, and Ella Cara Deloria Boas—he trained and mentored during his tenure at Columbia University. Mead, one of the book’s central characters and one of the first women to complete a doctoral degree in anthropology at Columbia, is the first character we encounter in the book. Journeying to American Samoa to research the fluidity of adolescent sexual norms, she also found herself navigating the shoals of romantic ambiguity: “She had left behind a husband in New York and a boyfriend in Chicago, and had spent the transcontinental train ride in the arms of a woman.” Even her confidence in her research was unsteady: “‘I’ve got lots of significant facts,’ she wrote, the sarcasm wafting off the page, but she doubted they added up to much.”

By detailing Mead’s personal life early on, King subtly challenges the reader’s assumptions about the norms of the time (progressive rather than prudish), while using a pioneering anthropologist’s crisis of confidence to illustrate the parallel crisis of the field of anthropology—whether researchers could be counted on to accurately depict the cultures they were studying. King raises some of the discipline’s major questions: What are the natural divisions of human society? Is morality universal? How should we treat people whose beliefs and habits are different from our own?

Mead learned how to synthesize new findings into meaning for herself and society under the tutelage of her mentor, Boas. A Jewish Prussia-born physicist turned geographer, Boas had immigrated to the United States and become a public intellectual in the burgeoning field of ethnography. While on an expedition to the Artic, he developed a new praxis for ethnographic research, namely, the “notion of the relativity of all education.” For Boas, this meant if other cultures were to be understood, the norms of the observers must be set aside—Americans and Europeans would have to “suspend their belief in their own greatness.”

But Boas was out of step with the culture around him. The standard view at the time was that a straight line could be drawn from primitive societies to advanced ones, with western “civilization” as a cultural standard:

In New York City, you could retrace this natural odyssey just by walking from one side of Central Park to the other. Exhibits on Africans, Pacific Islanders, and Native Americans were housed (as they are today) under the same roof as the dioramas of elk and grizzlies in the American Museum of Natural History. You had to go across the park to the Metropolitan Museum of Art to see what real achievement looked like.

Boas believed the only way anthropological research could withstand scrutiny was by centering it on induction: empirical examination of a range of groups and suspension of theorizing until enough data was collected. The alternative was to “reason in the deductive fashion by using a set of general principles that apply to one culture and see what it means when they do or don’t apply to another.” Boas’s  inductive method was rejected by both researchers and policy makers, leaving him to fight for his belief that research could record the norms of other societies accurately, agnostic of the ideals of western society.

It was a fight that consumed the careers of Boas and many of his acolytes. Among his students, King writes, the most enthusiastic “seemed to be drawn from the population of Columbia students segregated a short walk across Broadway: the women” at Barnard College. Detailing the expeditions of some of these female students, King shows how each found a love for anthropology and emerged as an intellectual luminary in Boas’s image.

Giving the book depth are supporting characters, like the American eugenicist, Madison Grant, who believed that immigration was tipping the country’s racial scales in the wrong direction. In 1925, Grant published The Passing of the Great Race, “hailed as a milestone in the application of scientific ideas to history and public policy.” Nazi policy makers later embraced the book, but Boas ultimately dismissed Grant’s beliefs with findings from a study that used a more novel and concrete method of inquiry:

There was no reason to believe that a person of one racial or national category was more of a drain on society, more prone to criminality, or more difficult to assimilate than any other. What people did, rather than who they were, ought to be the starting point for a legitimate science of society and, by extension, the basis for government policy on immigration.

The concerns of the heroes in Gods of the Upper Air have much in keeping with the sociopolitical topics that have driven American discourse since 2016: immigration, nationalism, race relations, and how facts are applied—deduction or induction? Wide in scope and driven by plot, Gods of the Upper Air combines creative storytelling with rich historical detail to show the reader that facts contradicting established norms rarely outmatch the willingness of the masses to cling to those norms, leaving the potential for ideological change to the tyranny of time.