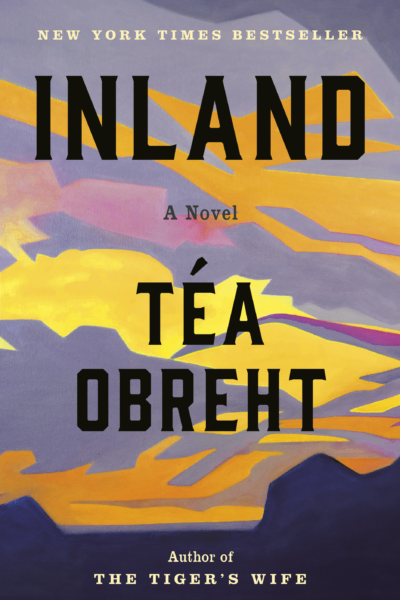 Téa Obreht’s first novel, The Tiger’s Wife, was published in 2011 to great acclaim. It was a finalist for the National Book Award, a New York Times bestseller, and awarded the Orange Prize for Fiction. Inland, her highly anticipated second novel, does not disappoint.

The novel takes place in the mid-to-late-nineteenth century and is told in alternating narratives. It opens with a man known as Lurie (anglicized from Djurić) sharing events from his boyhood with an unidentified listener. As a child, Lurie emigrated with his father from Ottoman Herzegovina to New York City, where his father’s sudden death left him orphaned at age six. He survived by collecting the dead from fleahouses on Bleecker Street or, when business is slow, by exhuming corpses from churchyards, and delivering them to hospitals to be cut up and studied: “Their innards laid out. Their bones boiled white.” When caught, Lurie and other thieving boys are deported by train to the lawless West, where his life of crime escalates. His chapters cover his flight from the law along the Missouri and south to Indianola, Texas, where he meets the companion now listening to his story, and they journey farther west together.

The other narrative centers on Nora Lark, a brusque homesteader in the Arizona Territory, a survivor of twenty years of toil on the parched frontier waiting for her husband to return home with a fresh supply of water. Lurie’s chapters cover his entire life, while Nora’s take place in a single day. The stunning moment when Lurie and his traveling companion meet Nora is the most brilliant scene in the novel.

From the outset, the fact that Lurie’s listener is off the page captures the reader’s attention. We become his rapt audience, as if we are with him, somewhere along the Missouri in the late 1890s, with flight in us too. Lurie’s memories of his father are vague and fragmentary; he knows the man was running from something, though he never learned what. Lurie tells of their sea crossing in hard, clean prose, recalling “the dead, of course, outlain in their white shrouds side by side along the stern.” He recalls his father’s hatred of Ottoman Turks, and his longing for his boyhood village of stone houses split by a river, but not much else.

Meanwhile, at home, Nora faces growing adversities during a severe drought. Her husband, Emmett, is three days late in returning. Her two older sons and all the family dogs have gone missing. The family may need to abandon their home and start over someplace else. Nora’s youngest son, Toby, thinks he saw a beast roaming nearby, which Josie, the family helper, corroborates. “Between the pair of you,” Nora says, “we might as well be living on Herschel’s moon.”

Though she might not believe Toby and Josie’s claim, Nora believes Evelyn, her long-dead infant daughter, is still living, growing up alongside her and acting as a mouthpiece for blunt truth:

Papa was hardly a saint when you met him.

Evelyn. It’s not right for you to say such things.

The West’s natural inland is a character in both narrative threads, but the novel’s strength rests in the depiction of Nora’s inner landscape. She questions whether the hard-bitten woman she has become was worth it, and she is outraged by her husband’s advice to his sons to do better than he did—to marry “ladies.” How in hell does anyone stay soft out here? “Two people at full strength could barely manage all the chores of a homestead: plowing, sowing, raising fence.” She begins to doubt whether her husband intends to return, sensing that his delay is not due to misfortune:

No. She could not put words to what she felt. Twenty years ago, Nora Volk and Emmett Lark had come together in love—or in what they believed was love, and at the very least a torrential hope that they were both cut from a cloth that could turn life at the edge of the world into a grand adventure. He’d had one; she had not. And now, in hoping better for their sons, Emmett had measured and weighed their years together and cast them off as wanting.

Back with Lurie, we learn that the unknown listener is a foul-smelling camel named Burke. And while we readers are wondering if Burke has anything to do with the beast Toby and Josie saw, it hits us: “what in hell were these jangling monstrosities, these big, toothy, snooded goats”—indeed, an entire boatload of thirty-three dromedaries—doing at the docks of Indianola, Texas? Obreht makes clever use of a little-known chapter in American history. The US Army did import camels from the eastern Mediterranean, along with Greek and Turkish cameleers, as an experiment in the mid-nineteenth century. These strange humped beasts were used as pack animals for the cavalry. They could haul over fifteen hundred pounds for nine days without touching water. One of the actual cameleers—Hadji Ali, nicknamed Hi Jolly—appears in the novel and teaches Lurie how to ride.

Along with these historical characters and classic American Western settings, the novel is populated with spirits and beasts and myths and the máti, the Greek talisman to avert the evil eye. This dense tapestry of a novel, filled with searchers, discoverers, ghosts, and legends, opens a new window in American fiction. When have we seen a Turkish camel driver, born in Smyrna, inhabit an American western? Inland’s plot includes violence befitting the western, but not the serial atrocities of Cormac McCarthy’s Blood Meridian; rather, the novel recalls Don Quixote or The Adventures of Huckleberry Finn in its breadth and reach. How and why Nora comes face to face with Lurie and Burke—aiming her shotgun at the junction of Burke’s neck and shoulder, with Lurie still mounted—will surprise as much as Obreht’s ingenious melding of literary traditions and historical facts.