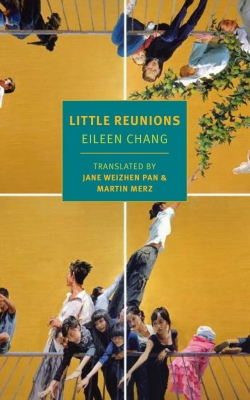 Eileen Chang’s novel Little Reunions begins on the eve of war. Julie Sheng, a young woman from Shanghai attending university in Hong Kong, is forced to flee when Japanese troops invade the city in December 1941. Upon returning to Shanghai, Julie, estranged from her father and with her mother abroad, moves in with her paternal aunt Judy. They weather the war years together. Judy finds a job at a German radio station and begins an affair with Herr Schütte, the principal of the German school in Shanghai. Julie begins pursuing her writing career and falls in love with Chi-yung, a political traitor and energetic philanderer. Such details of plot closely resemble the details of Eileen Chang’s own life. Perhaps because of its autobiographical content, Chang was hesitant to publish the novel, which she completed in 1976. It remained unpublished until 2009 (Chang died in 1995). Now, NYRB Classics has released the first English translation, by Jane Weizhen Pan and Martin Merz. To explain the title, they quote a letter Chang wrote to her literary executor: “My life is like a stalk of bamboo with its nodes marking the intervals of my mother’s comings and goings.” Although most of the reunions in the novel do involve Rachel, Julie’s gallivanting mother, there are other reunions, too—with family and friends, with spouses and lovers. Human recursion is the novel’s operating principle, and any escape is short-lived. The mood in Shanghai, and in Julie’s family, is claustrophobic.

Confinement is politically and thematically resonant. Julie flees Hong Kong for an occupied Shanghai. An extended flashback reveals another confinement in Julie’s past: her father imprisoned her for months as punishment for disrespecting her stepmother. When Julie escapes, she goes to live with her mother. Rachel is a fascinating character and a magnetic force. The narrative sharpens its focus whenever she’s present, as if to reflect that Julie is happily but anxiously alert to her mother’s caprices. Rachel loves Julie, but motherhood impedes the way she wishes to live. She mutes and disguises her affection. She tries to endow her daughter with a hardened spirit of independence, and to model the fierce autonomy Julie might one day wield. But her stiff posture has consequences. Later in the novel, when Julie tries to pay Rachel in gold for letting her live with her, Rachel becomes upset: “Tears streamed down Rachel’s cheeks. ‘Even if I was just a stranger who once treated you nicely, you don’t have to act like this toward me.’”

Rachel and her sister-in-law Judy spend their lives mounting quiet rebellions. They challenge the confines imposed by sexual and cultural mores and by the clannish isolationism of family. They travel to Europe together. They take various lovers; at one point, they amicably vie for the same lover. During the war, though, their lives diverge. Judy remains in Shanghai, scrounging for jobs, living off scallion pancakes, and acting as a surrogate mother to Julie. Rachel is abroad as the war rages, and it’s not until much later that we learn of her activities: in India she worked as a personal assistant to Jawaharlal Nehru’s sisters and lived in a leprosarium. While Rachel continues to cultivate intercontinental love affairs, Judy’s life contracts. She hopes for solitude. She looks at apartments where she dreams of living alone. She grows proud of her celibate lifestyle, her new form of independence. Indeed, this is a novel about the varied independence of three women, and all the contingent thrills, sacrifices, and dangers of trying to live a life beyond a culture of submission. Emboldened and empowered by the precedents of her mother and aunt, Julie too might live freer than most. An elder uncle makes the comparison explicit: “She’ll be just like you two, with an unlimited future, sure to be outstanding.” He goes on, admiring Judy and Rachel: “The two of you really are like knight-errant female warriors of yore, genuine heroines. Your lives put all of us to shame.” The novel does not follow Julie far into adulthood—barely into her thirties—but we see her become an independent intellectual in the mold of her aunt and mother. That Julie, who is really Chang garbed in a thin veil of fiction, will one day become—in fact, already is—this book’s author, only adds to the certainty that she will realize all of the intellectual and artistic promise of her youth.

The book’s timeline spans less than a decade, from the outbreak of war in Hong Kong to the first few years in postwar Shanghai. But we often see the intrusions of the past, and even get a few forays into the future: we glimpse Julie refusing to go to her mother’s deathbed in Europe, Julie getting an abortion in New York. These visions of Julie’s adulthood, though painful, act as small assurances that she will survive the present and find her future. But this book is less about what’s to come than what’s come before, and Chang spins the present into the past with ease. Such jumps occur quickly and deftly, even mid-sentence, and Chang’s elegant writing, usually even and smooth, sometimes gives way to bursts of lush description that coat events in a film of nostalgia. Household objects, even people themselves, are portals to the past; the very presence of Rachel reminds Julie of her ancestry. But Julie is sometimes reluctant to acknowledge the inescapability of the past:

Julie, however, devoted little time to revisiting the past … Memories, happy or not, always embodied a doleful note, which, no matter how faint, Julie felt a strong aversion to. She never sought out melancholy, but life unavoidably overflowed with it. Just thinking along these lines made her feel like she was standing in the portal of an ancient edifice, peering through the moonlight and dark shadows that permeated the ruins of a once noble and illustrious household, which was now nothing more than scattered shards of roof tiles and piles of rubble from collapsed walls.

Even so, she can’t help but be fascinated by the fragmented lives of her ancestors; she picks up the tile shards despite their sharp edges. Again and again, the novel looks over its shoulder. One memory leads to another. Nested together, they merge and compound. Memory is both the method of storage and the thing stored. While this novel acts as a repository of family memories, it also investigates how memories compose a character, and how the accumulated past decides who we become. Like a fractal examined, each individual memory reveals its crystalline structure of limitless associations, a geometry connecting the pains, potentials, and triumphs of the past.