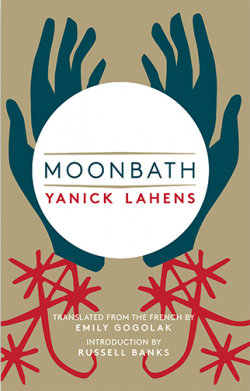 Moonbath, winner of the 2014 Prix Femina and the 2015 French Voices Award, takes place in Haiti between the 1980s and (roughly) the present day. Following characters from several generations of a family living in a Haitian village, the novel turns aside from specific political and historical events in favor of investigating the ways in which the country repeats its own history unceasingly. Its author, Yanick Lahens, has lived most of her life in Haiti, where she has taught literature and worked for the Ministry of Culture. She now cohosts a radio show on one of Haiti’s most prominent stations and is among the leading voices in Francophone culture.

The matriarch of the novel’s central family is Olmène, seen early on as a young peasant girl who catches the eye of the hypnotically forceful Tertulien Mésidor. Tertulien is an outsider, a fifty-something don who rides gloriously into the town on his horse. The desire he feels for Olmène is “immediate and brutal, and it sparked within him a longing for entangled legs, furtive fingers, hips taken right between his palms, the scent of ferns and wet grass.” Olmène’s experience with Tertulien prepares her for another passionate encounter, this time with a man her own age, albeit one who has similar social and financial advantages to her first lover. During her encounter with the younger man, she realizes that “a lineage will be born from this burning afternoon. From the master whose desire obliged him to fall to his knees and a peasant who opened herself to a man for the first time.” The names of Olmène’s descendants take on an allegorical quality that speaks to the novel’s concern with tradition and mythology. There’s Dieudonné, “given by God,” and Cétoute, “‘that’s all,’ because my mother Philomène wanted nothing more than for me to the be last. In order not to keep the promise of ten or fifteen children buried in the depths of the wombs of women here.”

The clash of the haves and the have-nots, present in the encounter between Olmène and the future father of her children, is seen again and again in Moonbath. This clash takes place not just among Haitians, but between Haiti and the outside world. Powerful men like Tertulien repeatedly visit the island as “sellers of miracles,” promising a world to come that’s “wild with happiness”—the opposite of Haiti’s widespread poverty. During one particularly inspired rally by a foreigner named Orvil, we see the crowd mentality embodied:

We were no longer men and women, separate and dispersed, but a single body that turned, turned, and turned again. As though the regular and unaltered beating of the tambour assòtòr had made one single heart of us all … We wrapped up the world with all our interrogations, all our suffering, all our expectations. And then, by way of turning, it seemed to us that our feet no longer touched the earth. That the dust that they had kicked up was a blanket of light. That the gods woke up in this light and we were bathing with them.

The “we” who fall for Tertulien and his kind do so again and again, even though in reality “we” may be a whole new slew of individuals. The feeling of collectivity is particularly intense here as the members of the crowd feel themselves merging into a “single body,” but it’s present throughout the novel, which is largely narrated in the first person plural, the island’s communal voice.

Moonbath, in both its prose style and thematic concerns, reminded me of the work of Gabriel García Márquez. For despite all the vividness of Tertulien and Olmène, Dieudonné and Cétoute, Lahens is less concerned with the particularities of her characters than with the fluidity of time as it acts upon them. The omnipresent anonymity of “we” as seen in the passage above isn’t limited to any particular group of people at any particular moment; as a result, the “we” perspective allows the reader to observe mechanisms of time, both as it stands still and as it pushes forward. In as much space on the page as it takes for the reader to feel the pulsing beat of the crowd’s heart, Lahens sweeps us through an expanse of history felt more intensely because of its understated tone:

Each came to tell their story of the last fifteen years in just a few minutes. Births, deaths, and departures. The earth emptied of its blood, its flesh, brought to its knees, the stingy sea, the eradication of pigs, the death of craftsmen, the disease of the coffee, palms, and lemon trees, the clothes from elsewhere, the worn-out dressing gowns of the women from Minnesota that warmed the old bones of the countryside. […] Leosthene wanted to meet all those born during his absence, so as to remember how stubborn life was, and he had the feeling that the tree was still generous with its new branches.

Here we see the ebb and flow of seasons, of lives and deaths that, however unsettling they might seem to the individuals concerned, are really only part of the dance of life itself. No matter what magic-bearing leader or savior comes to town, crops and babies will still perish and sprout forth anew—life, for all it takes away from us, is nonetheless “generous.”

The final chapter of the book, narrated in Cétoute’s first person, embodies this notion perfectly, giving the novel as a whole a sense of knowing, not fatalistic, completion. She imagines her death and resurrection forty days thereafter, her mother dressing her corpse in red high-heeled shoes and a white dress like one she has admired on a soap opera. Emerging from the sea, “wearing the dress of a queen and with feet on fire,” Cétoute will be united with her people. “My death will no longer be a torment. I will bandage the wounds. I will sweeten the bitterness. I will intercede with the lwas [voodoo divinities], the Invisibles,” she tells herself.

Connected to generations past, present, and future, to places near and far, to contemporary society (soap operas, fashion), and to the spirits who live beyond the grave, Cétoute is both the highest and lowest expression of her name in her immortality—akin to the all-encompassing “we,” but also a speck in the timeline of the universe: “That’s all.” Leaving the novel on this optimistic note prevents us, then, from making grand judgments about the state of Haiti as a country and culture, no matter how much suffering we’ve encountered in the pages we’ve read. The country’s flaws and failures, while many and unique, are ultimately stages in its own ongoing life cycle: the events and feelings of day-to day dramas nothing really special compared to what came before or what will come. With this deep sense of humility, Lahens gives the voice of Haiti a cadence that is unfamiliar to American ears: one that doesn’t plead in its state of suffering or hatred, but sings.