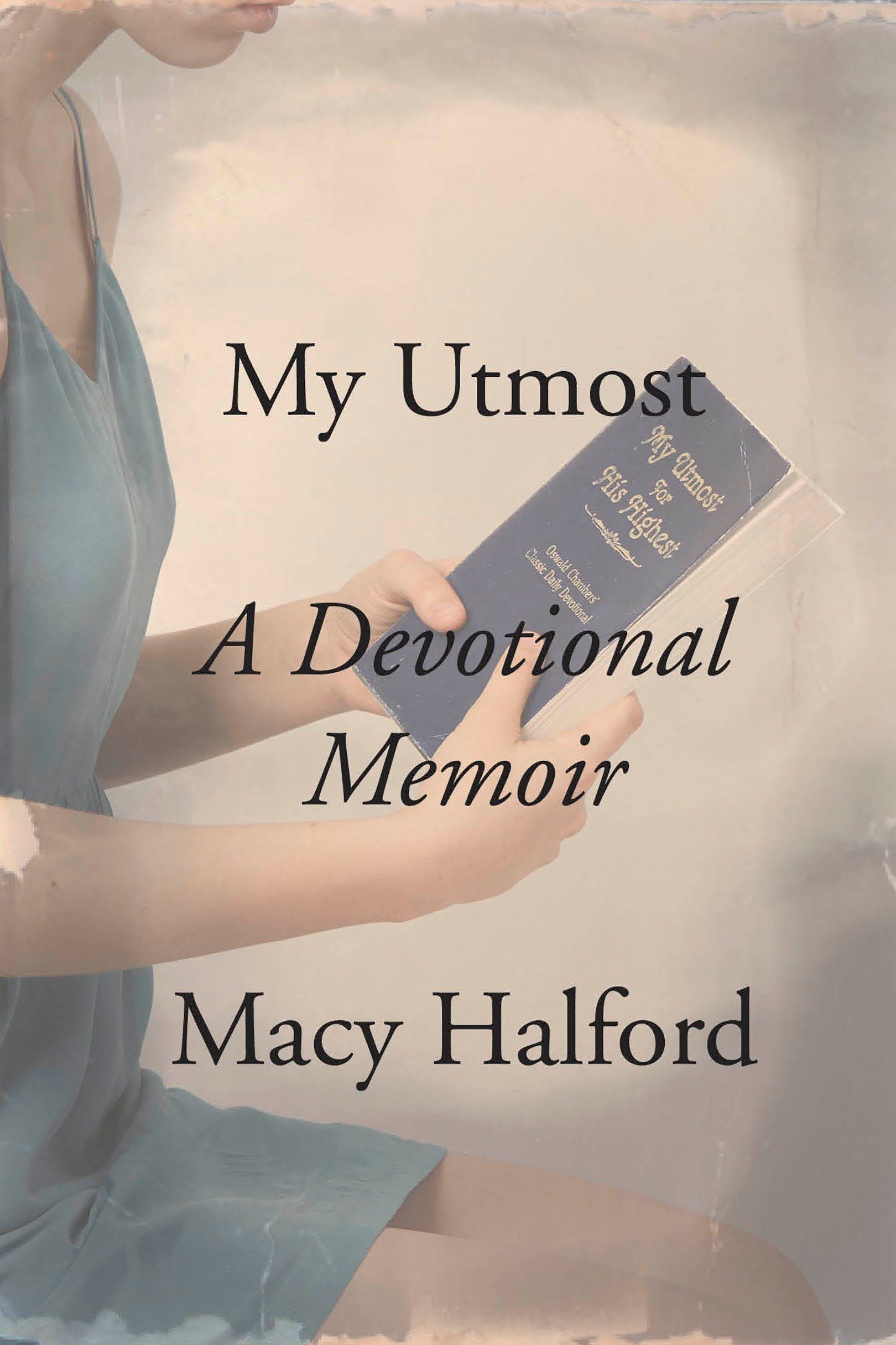 Macy Halford’s first book asks Christians and non-Christians alike to reflect on how religious thought influences public and private life. This makes it a kind of devotional—but it’s also a book about another devotional, one far older and far more famous. Halford takes her title from My Utmost for His Highest, a ninety-three-year-old book by Oswald Chambers, a Scottish artist-turned-preacher whose writing has been translated into more than thirty-five languages. Chambers’s devotional is a favorite book of President George W. Bush and a cherished text among evangelical Christians.

This is the community in which Halford grew up, her childhood dominated by church camps, Sunday School and conversations with her strict grandmother. My Utmost describes her life, career and increasingly conflicted faith, and how all three have been influenced by Chambers’s devotional. Halford combines spiritual autobiography with social commentary and church history; in doing so she puts her own life and experiences within the broader context of the role of religion in contemporary America.

My Utmost is, too, a biography of Oswald Chambers, whose life did not follow the traditional path of a nineteenth-century clergyman. An artist by training, the Scottish Chambers grew up in the home of a pastor in London. He turned down a scholarship to what is now known as the Royal College of Art, only to pursue two more years of art training at the University of Edinburgh. There he came under the influence of Alexander Whyte, one of the most famous and charismatic preachers of the day. From there, Chambers accepted a call to ministry. He left Edinburgh almost immediately afterwards to pursue theological training at a small college near Glasgow. Chambers later founded and served as principle of the Bible Training College in London. Throughout his training and teaching, he retained the artistic leanings that kept him open to exploratory thought.

Chambers has been a mythical figure for Halford since her childhood. His devotional sat on top of the Bible on her childhood nightstand, and she often spent more time reading the former than the latter. When she moved to New York as a young adult, she carried with her the open-minded realism of Chambers alongside the values of her fairly conservative Dallas home. Working as a book review editor at the New Yorker in the 2000s, she experienced the discomfort of being an evangelical Christian in a world that demanded secularism.

Halford describes, in painstaking detail, the awkward moments that arose from this clash of cultures. On the urging of her mother, Halford attended an event for Christian women in publishing. When she arrived, she realized that many of the attendees were involved in Christian publishing, and were shaping their careers around their faith. She stood out, uncomfortably, as the only woman working at a major publication like the New Yorker. And the more time she spent in liberal settings, the more she experienced growing doubts about some of the more conservative aspects of her faith. Here, too, Chambers could help: he openly embraced “doubt,” a concept generally eschewed by Halford’s many Sunday School lessons. To Chambers, “doubt is not always a sign that a man is wrong; it may be a sign that he is thinking.” Halford engaged in such thinking as she began to consider how her faith and religious upbringing might fit within her changing world. Not that Chambers smoothed away all Halford’s difficulties. She continued to struggle, for example, with one of the central tenets of his faith, the belief that the “golden rule for understanding spiritually is not intellect, but obedience.”

Her enduring discomfort reached its apex on the Sunday preceding the 2012 presidential election, when she heard the pastor of First Baptist Church of Dallas, who had replaced her childhood pastor, giving his perspective on President Obama’s reelection prospects.

I want you to hear me tonight, I am not saying that President Obama is the Antichrist [ … ] ; but what I am saying is this: the course he is choosing to lead our nation is paving the way for the future reign of the Antichrist.

She left the church auditorium immediately, resting on the curb outside of the church building until the service had concluded. In her reflection on this moment, she uses the pastor’s speech to examine contemporary American fundamentalism’s distorted perspective. This examination makes the publication of Halford’s book extremely well timed. The Obama-denouncing pastor, Robert Jeffress, became one of Donald Trump’s most ardent supporters and the unofficial leader of Trump’s evangelical advisory council. He encouraged Trump to repeal the Johnson Amendment which previously limited political endorsements from the pulpit. In response, the opposing faction of American Christianity has begun to push for the very openness Halford finds in Chambers. In May 2017, several months after the publication of My Utmost, twenty-three leaders from the religious left delivered a “Reclaim Jesus” statement to the White House, declaring their commitment to fighting racial bigotry, authoritarianism, sexual violence and other hallmarks of the Trump administration. Chambers, who described his theological mindset as liberal, might have more in common with supporters of “Reclaim Jesus” than with the conservative Christians who adore his book; Halford suggests that this might give the latter pause for thought.

Halford artfully contrasts the flexibility of Chambers’s ideas with the rigid dogma of today’s evangelical church. And while she reminds us that Chambers was no relativist (his personal practices bordered on the puritanical, and he resisted card playing, smoking, and drinking), he encouraged his followers to think outside the norms of their faith. He is sometimes referred to as the “Haphazard Apostle”, and perhaps because of his own circuitous journey into the ministry, he believed that our lives and our thoughts should not be fixed, but should instead be able to adapt to the world in which we find ourselves.

This makes him an ideal guide for Halford and her lifetime of navigating the difficulty of being both religiously raised and fully engaged in her environment. But her extensive research into the lives of Chambers and his wife Biddy often distract from her own religious journey, and even from Chambers’s continuing importance to innumerable Christians. Nevertheless, My Utmost’s blend of history, memoir, and social commentary is effective in showing the reader how deeply ahistorical and unadaptable our current public religious discourse is. “Restate to yourself what you believe then do away with as much of it as possible,” Chambers writes. If we can follow this suggestion, we might be able to substitute our divisions and dogma for an open-mindedness that still allows us to hold fast the central tenets of our beliefs and identity.