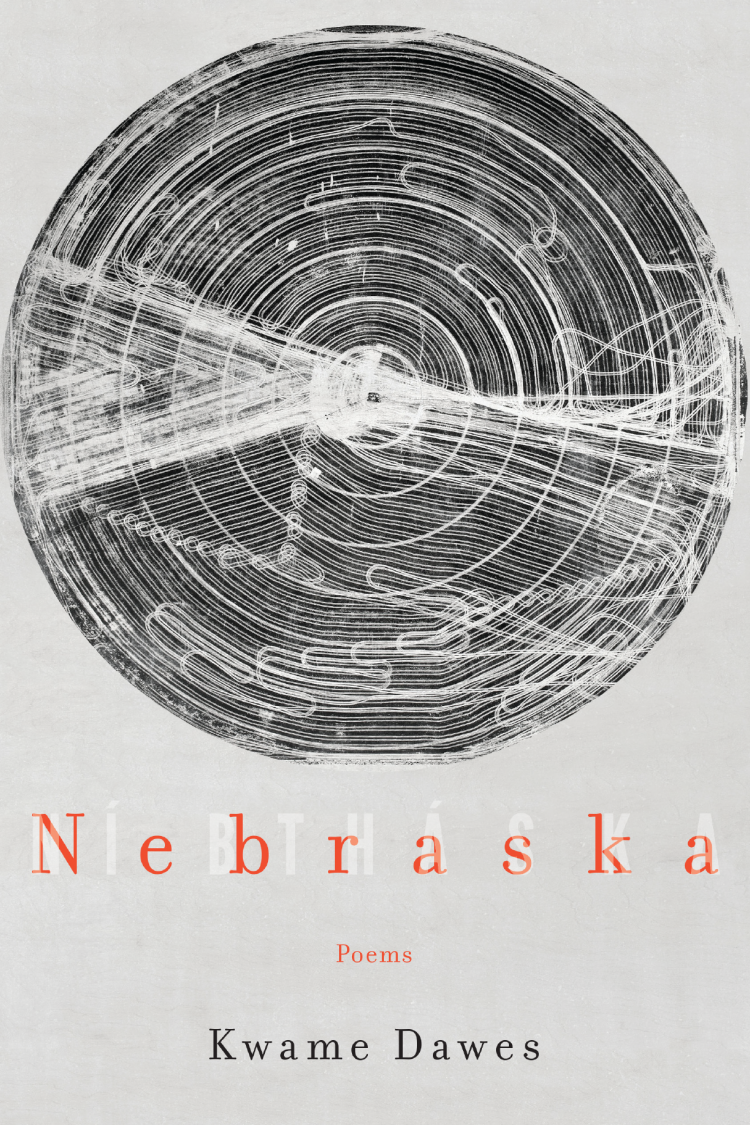 In his new collection, Nebraska, Kwame Dawes uses the sublime emptiness of middle America to explore his immigrant and poetic identity. Dawes, born in Ghana and raised mostly in Jamaica, relocated to Nebraska in 2013. In his first collection centered on his newfound state, Dawes’s vision of middle America is never sentimental or idealizing. Building on themes of displacement from previous works, in Nebraska he engages with a landscape that eliminates possibilities of self with its broad, desolate spaces.

In poems like “The Midwestern Sky,” Dawes describes the erasure he feels in this environment:

Not all skies are readable. I am an alien
in this wide-open country, and the sky’s
inscrutable dialect leaves me bewildered

Similarly, he is mystified by the individuals who populate these stark landscapes:

Those familiar with Dawes’s earlier work will appreciate the poet’s exploration of his social and poetic consciousness, now in the Nebraskan milieu of vacant rural spaces, agrarian communities, and Protestantism. Recasting Protestant symbols and icons, Dawes imbues the act of writing with mysticism. The poet’s practice is fused with religious and ritual act in “How I Became an Apostle”:

Not that I have my thorn in the flesh,
I can write epistles, holy writs. It’s winter.

I limp out just after the delicate chaos
of flurries covers the driveway and I shovel.

This is a ritual of sin: after clearing a long
path behind me the pox of snow returns.

Dawes’s place-consciousness leads him to compare his immigrant status with that of the pioneers that settled in the Great Plains while the area was inhabited by the Native American Great Plains Tribes. Nebraskan Native peoples were displaced by—among other factors—the Homestead Act of 1862, which enabled white pioneers to colonize their land. Those who retained their land saw it integrated into a capitalist landowning system by the Dawes Act of 1887. While Dawes’s sense of displacement and recent arrival to this particular place identifies him, in some ways, with the European settlers that established farms in middle America, the comparison is complicated by Dawes’s racial identity. There is belonging:

[ … ] among these midwestern
people I can forget myself—
I can forget that the deep
funk in my skin is my
brokenness steaming in
these late days of my life.

But there is also disconnection: “this is how / I get through my days in a crowd of Nebraskans; / [ … ] no commitment in my eyes, nothing—it takes an / emptying of feeling.” This paradoxical relationship comes through in “The Poor Man’s Sacrifice,” when he wonders, “Are we settlers? / We have no rifles, no wagons, / and this is the way that a new land grows old on / you. We have been leaving / since the day we arrived.”

Dawes further engages with Nebraskan history and culture by making wide-ranging reference to Nebraskan literary figures. In “Sandoz, Revisited,” Dawes describes the statue of the novelist Mari Sandoz in Chadron, Nebraska, writing “Layered, she stands against the biting / wet wind; the reservation to her back.” Such details instill an unmistakable authenticity to Dawes’s continuation of a Nebraskan literary tradition.

As often, however, Dawes is conflicted in channeling these Nebraskan poets. In the anti-pastoral “The Chronicler of Sorrows,” Dawes imagines how he could become a stereotypical midwestern poet:

Were I better at this, I would study almanacs,
chart the seasons, visit Ted Kooser on his farm
[ … ]             and ask him the names of the birds
turning in the sky, or the yield of the corn crop,
or the number of people he has buried—farm people,
his people.

Instead, Dawes defies these expectations, and all that “a better man” might do—like “drink coffee / in the quaint cafés in western tiny / towns, talk to those wary of me at first”—by juxtaposing this standardized image ironically with his real self:

I am not a better man. Instead I make up stories
like one who has been promised that his sayings
will become the source of proverbs, and he will be
remembered as the lone man, hooded, walking
across the sea-hardened beach [ … ].

Admitting his divergence from the idealized middle American writer, Dawes takes focus from those already recognized within the tradition and lends it to emerging diverse voices that have yet to be understood as uniquely rural or Nebraskan. Dawes elides the role of the midwestern pastoral poet as chronicler of idylls and instead positions himself as an equally valuable chronicler of sorrows, widening the possibilities of the tradition, especially for other immigrant writers who may follow him.

In the small Nebraskan town where I was raised, the town banker told my parents on their arrival that they’d each be seen as “a stranger for a day and a newcomer for 20 years.” Dawes is no longer a stranger to the middle American landscape, now a welcome newcomer creating space for new voices to be heard.