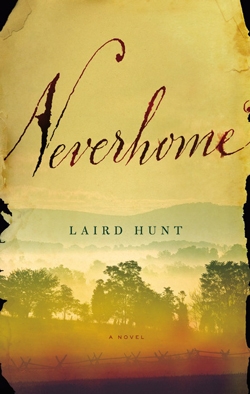 Among the greatest war heroes in literature and in life are an often-overlooked company of women who, juxtaposed with their male counterparts, demonstrate a kind of virility that is essential to winning any military campaign. This legendary group of domestic soldiers, from Homer’s Penelope to Dolley Madison to Taya Kyle, now has a formidable new member: Constance Thompson, the Indiana-based protagonist of Laird Hunt’s haunting new novel Neverhome, who disguises herself as a man named to fight for the Union army in her husband’s stead.

The author of six previous novels, Hunt has earned acclaim as a bard of the Midwest. While this new book has its roots in that territory, the nature of its historical backdrop and hero(ine) allow it to transcend its setting. In her male incarnation as “Ash,” Constance ventures literally and metaphorically far from home and, as the title implies, never truly returns to her old life—or her old self. As another female solider she meets on the road puts it: “I made it back, sure enough, but never felt I’d made it home.”

Hunt explores many facets of the Civil War, but Constance’s development while posing as a man is the book’s dominant concern. The protagonist’s first-person voice infuses the novel with verve and mystery even as her dual personalities manifest themselves throughout. For two years she traipses across the south, killing in self-defense and for the Union’s cause. But we are never sure to what degree her brutality and cunning are innate or brought on by circumstance. Arguing in favor of the former is the fragmented, terse language with which she tells her story. She declares her superior strength from the start, explaining that her husband, Bartholomew, “was made out of wool” while she was “made out of wire.” When she shoots her first man she merely notes, “You could see a kind of brown bloom coming up through his light coat,” and asserts “I had not run. I had fired my weapon. . . . I was going to have to learn to kill.” The way she comports herself with the other men, including her colonel, is natural, playfully aggressive, and commanding. She even becomes a battlefield celebrity when the others write the song “The Ballad of Gallant Ash.”

But Constance has a lining of wool within her, too. She is a fine observer of places and people and can wax poetic about ordinary things. During one march she says, “I slept then. Went wandering in realms of black and green. When I woke it was the deep hours. Stars lit the sky, bright burny things.” She frequently speaks to the ghost of her deceased mother, which adds a supernatural element to the book. Her mother’s most salient feature is not an ethereal, angelic protectiveness, however, but powerful legs. Constance describes how on Sundays “she would step out of the bath and those legs just kept coming out of the water like they were tornadoes climbing up out of a pond.” This memory suggests one aspect of Constance’s strength, but even as she recalls the liberation she felt when first running in pants, outpacing Bartholomew by strides, she longs for the weight of a dress and other feminine touches now absent from her world.

When she at last dons her normal weeds, her gender once more becomes an enigma. She and two other men are captured by rebels, and Ash is rescued by a kind, lonely woman named Neva. The two share fleeting yet passionate moments of romance—stolen kisses, prolonged glances—that may be the result of their both sleeping alone for too long. Or maybe something else. Whether Neva wants Ash or Constance, and whether Ash or Constance responds to Neva’s touch, is unclear, an ambiguity that ramps up through to the end of the story.

Indeed, when Constance returns home she’s not herself at all. Bartholomew has been reduced to a servant on his own land after it was taken over by Confederate soldiers, and Constance quickly cuts through the offenders in a shooting spree—a scene recalling Odysseus’s slaying of the suitors. Here, she has fully taken on the man’s role, which she’ll no doubt need for the uncertain future ahead of her. But we know now that this masculinity is by no means exclusive. Accepting her vulnerabilities as a woman and as a human, Constance has found within herself a different kind of constancy—an urgent will to survive, and a steadfast faith in the idea, if not the actuality, of a true homecoming of her own making.