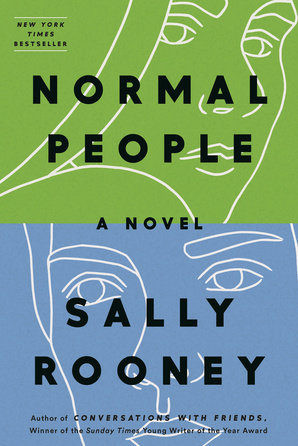 Irish writer Sally Rooney has been a sensation since her debut novel, Conversations with Friends, was published in 2017, when she was just twenty-six. The following year, Faber published her second novel, Normal People, which was released in the US in April 2019. Among other accolades, Normal People won best novel in the 2018 Costa Book Awards, was longlisted for the 2018 Man Booker Prize and the 2019 Women’s Prize for fiction, and appeared at number twenty-five in the Guardian’s list of the hundred best books of the twenty-first century. In May of this year, Hulu announced it will be producing a miniseries based on the book.

Both Rooney’s novels explore power dynamics between men and women, but where her first delves deeper into female relationships and friendships, Normal People keeps a tight focus on Marianne and Connell, the novel’s two main characters. The prose and pacing in Conversations with Friends is quick and light, the plot volatile and addictive. In contrast, Normal People is measured, deliberate, and often heartbreaking, particularly as the characters recall painful experiences with eerie calm. Taking the familiar theme of the popular guy falling in love with the outcast girl, in Normal People Rooney has made something original and contemporary, deeply engaged with gender and class politics.

The novel begins with Marianne Sheridan eating chocolate spread straight out of the jar while sitting on the kitchen countertop of her home in Carricklea, County Sligo, Ireland. The doorbell rings, and she answers to find her schoolmate Connell Waldron arriving to pick up his mother, who cleans Marianne’s house. They are barely acquaintances, joined only by Connell’s mother’s employment. Despite this loose connection, in the five minutes he has to wait for his mother, Connell admits to Marianne that a teacher at school makes him uncomfortable with her sexually suggestive behavior toward him. From their first conversation, he is able to tell Marianne things he is too afraid to say to anyone else.

The unexpected understanding between them turns into a love that Connell is desperate to keep hidden, since he believes Marianne “is considered an object of disgust” by their peers. Contemptuous of her classmates, she “has no friends and spends her lunchtimes alone reading novels,” while he, one of the popular kids, “dreads being left alone with her,” but “also finds himself fantasizing about things he could say to impress her.” This simultaneous attraction and revulsion will define the next many years of their lives. Though Connell never says explicitly that Marianne repulses him, his actions make clear that he wants nothing to do with her outside of their trysts. As we learn more about Marianne, we discover that she’s no stranger to male abuse: her mother “decided a long time ago that it is acceptable for men to use aggression toward Marianne as a way of expressing themselves.” Marianne learns to detach, “as if it isn’t of any interest to her, which in a way it isn’t.” Rooney echoes this detachment with her spare writing style, keeping a cool distance from a topic that might otherwise crush everything else in the novel.

Connell and Marianne both end up at Trinity College Dublin, Ireland’s most prestigious university. After some time there, Marianne’s awareness of men’s aggression changes. “Generally I find men are a lot more concerned with limiting the freedoms of women than exercising personal freedom for themselves,” she observes one night to Connell and her friend Peggy. “When you look at the lives men are really living, it’s sad [ … ]. They control the whole social system and this is the best they can come up with for themselves?” Once considered uncool, Marianne’s thoughtfulness and frank discussions about literature, politics, and sex make her a favorite amongst her classmates. While Connell is part of her social group, he has a hard time finding his place.

Aware of how he dresses (not like those “Trinity types”) and how little money he has compared to his peers, Connell notes that everyone else seems to “move through the world in a different way, and he’ll probably never really understand them, and he knows they will never understand him, or even try.” In Carricklea,

everyone knew who he was already, and there was never any need to introduce himself or create impressions about his personality. If anything, his personality seemed like something external to himself, managed by the opinions of others, rather than anything he individually did or produced.

Where Marianne has learned to carry everything inside, and “can’t imagine what [her] life would be like if [she] cared what people thought of [her],” Connell has only learned to take his cues from outside. He falls into a depression in which even his panic attacks and crying fits “seemed to descend on him from outside, rather than emanating from somewhere inside himself.” Eventually he finds solace in writing, discovering he’s actually quite good at it.

The novel follows the two characters as they come of age, their life choices and misunderstandings producing understated yet nuanced emotional journeys. In their quest for normalcy, Marianne and Connell discover that “they’ve been like two little plants sharing the same plot of soil, growing around one another, contorting to make room, taking certain unlikely positions.” Rooney shows us that this plot is well worth exploring.