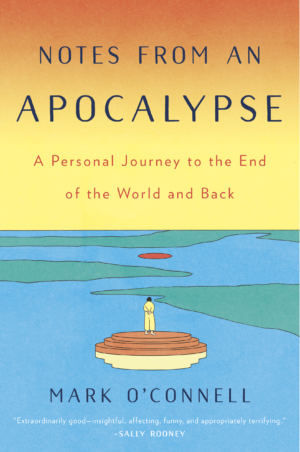 Notes from an Apocalypse

Almost every day some news item reminds us that we’re losing the world we know, bit by bit. The dying-off of bees threatens crop yields. Coastal communities are evacuated because they’re one storm away from destruction. An ice shelf the size of Manhattan collapses into the sea. For many of us, anxiety about climate change pervades our consciousness: it saps our emotional energy, blunts our ability to think, and makes optimism almost impossible. Last spring The London Review of Books pursued this anxiety to one of its bleakest finalities with a cover story that bluntly posed the question, “Is It OK to Have a Child?”

In the first chapter of Notes from an Apocalypse, Dublin writer Mark O’Connell shares his own pervasive anxiety about climate change. His browser tabs are open to UN reports on looming mass extinctions and photos of melting ice caps. While his son sits next to him watching a funny cartoon about a bear, O’Connell watches a clip of a starving polar bear scavenging in garbage. He partly attributes his obsession with climate change to having a child: “When I thought about my son and his future […] I felt a kind of abstract but all-consuming melancholy.” How do you raise a child in a world that is ending? “The smart money seemed to be on apocalypse,” writes O’Connell, “but as a parent I felt I had some kind of moral duty to be deluded about the future.” He says he wrote this book because

I was drawn toward the thing that frightened me, the thing that threatened to tear everything apart, myself included [ … ] I wanted to be near to the idea of the apocalypse, to look upon what evidence of its deadly work could be found in the present: not in the form of numbers or projections, but rather in the form of places—landscapes both real and imaginary where the end of the world could be glimpsed.

It’s a compelling premise: confronting the end of the world.

But that’s not quite what O’Connell does. He doesn’t so much confront the end of the world as write a travelogue that’s a combination of a close-up look at subcultures of privileged obsessives and disaster tourism. He attends a conference on Mars colonization, where experts speculate on (among other topics) the opportunities settlements in outer space provide for experimenting with new societies and how children would develop physically in gravity-free environments. O’Connell spends time with “preppers”—men (it’s almost always men) learning the survival skills and gathering the tools necessary to take care of themselves and their families when civilization collapses. He visits a planned real estate development in South Dakota where a network of abandoned underground military bunkers will be repurposed into luxury condos where its residents can live safe from the dangers of nuclear war.

It’s unfortunate that Notes veers off course in this way. O’Connell’s writing is often beautiful and profound. Recounting his visit to the abandoned city of Pripyat (a casualty of the 1986 Chernobyl nuclear disaster), he writes,

Immediately you are struck by the beauty of the place, the unchecked exuberance of nature finally set free of its crowning achievement, its problem child. The road you walk on is cracked with the purposeful pressure of plant stems from below, the heedless insistence of life breaking forth, continuing on. It is midsummer and the day is hot, but with the sibilant whisper of a breeze in the leaves, and butterflies everywhere, superintending the ruins. It is all quite lovely, in its uncanny way; the world, everywhere, protesting its innocence.

O’Connell is also an acute social observer, as when he notes that the preppers are ultimately motivated not so much by survival as by a desire to enact an idea of masculinity they feel society has deprived them of. Or when he remarks of the wealthy proponents of Mars colonization, such as Elon Musk, that they want to live American myth by recreating the pioneer experience in outer space. But none of this involves actually confronting the “evidence [ … ] of the deadly work of the apocalypse” that he claims so preoccupies him. In many ways, Notes is a book-long exercise in avoidance.

Nowhere is this more apparent than in the last chapter, where O’Connell is back in Dublin with his family. He writes that he no longer feels overwhelmed by despair, simply because “it became apparent to me that a perpetual state of anxiety was no way to live [ … ] In the meantime, we have no idea what might come to pass. Make of that what you will.” In neither case is O’Connell wrong, but as the ending of a book purportedly about grappling with the end of the world, it smacks of deliberate delusion.