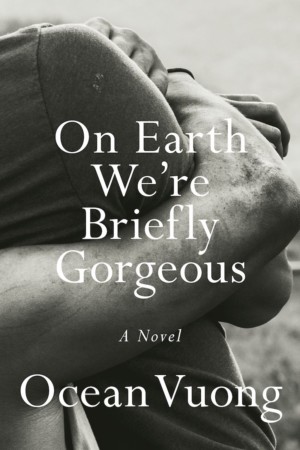 Ocean Vuong is known for his 2016 poetry collection about the aftereffects of the Vietnam War, Night Sky with Exit Wounds, which won the Whiting Award and T.S. Eliot Prize. His debut novel, On Earth We’re Briefly Gorgeous, is as lyrical and haunting as his poetry. The recently named MacArthur Fellow’s novel is a series of letters written from Little Dog, the narrator, to his illiterate mother, Rose. Little Dog is a working writer who reflects on his childhood and tortured adolescence as a gay immigrant in working-class Hartford, Connecticut. Through his correspondence, we receive such stark remembrances as the time Rose drove Little Dog and his grandmother, Lan, to what she thought her sister’s house—only to realize, after bashing the door with the wooden butt of her machete, that her sister had moved to Florida five years before. Or Little Dog’s memories of scraping his mother’s back with Vick’s VapoRub and a coin, bruising her skin in this small act of after-work relief. Or the disclosures of his first romance with a boy, Trevor, on the tobacco farm where he (a minor) worked illegally. Through the episodic stories recounted in his letters, Little Dog’s patchwork of memories builds a narrative of aging, lost innocence, intergenerational trauma, and a complex American identity.

The reader is submerged in plot and scene, only to be reminded periodically that Little Dog is speaking to someone—some “you” other than the reader—and that the novel is a form of confession. As the narrator tells a story about his classmate Gramoz rejecting him, shouting “Stop following me, you freak!” on the playground, it is easy to forget that this story is not being told to a faceless audience. We are jerked from the story by Vuong’s use of “you” throughout, an abrupt reminder that this story, like the others, is being told to his mother. This is the case with many of the anecdotes recounted in the letters, and so a double tension ensues: the tension of the narrated events is added to the tension of the mother-son relationship unfolding before us. As Little Dog recounts traumatic memories of violence, war, dislocation, and abuse (often at his mother’s hands) alongside memories of love, joy, and discovery, the reader is left to wonder whether Rose will ever read it, if she will ever know the mind of her son. A central irony, considering that the entire book is Little Dog’s attempt to understand the mind of his mother.

In his poetry, Vuong elicits discomfort, confusion, and sadness through sound, white space, and double meaning. His novel, however, takes a more intellectual approach to the use or misuse of language, how it excludes and includes. The narrator waxes philosophical about Barthes’ The Pleasure of the Text: “No Object is in a constant relationship with pleasure [ … ] For the writer, however, is it the mother tongue.” Little Dog is preoccupied with the relationship between the mother tongue and its children. “But what if the mother tongue is stunted?” he asks. “What if that tongue is not only the symbol of a void, but is itself a void, what if the tongue is cut out?” Little Dog, Rose, and Lan all struggle in their own ways with language and memory. For Rose and Lan, language cannot adequately express the memory of their trauma, especially in an unfamiliar place where no one seems to understand them. For Little Dog, who is a writer and who depends heavily on language, the difficulty is in his inability to communicate in a tongue his matriarchs understand. “The Vietnamese I own,” he says to his mother, “is the one you gave me, the one whose diction and syntax reach only the second-grade level.” Their relationship is marked by the absence of language, the inability to express. Little Dog’s letters give voice to what previously was not, or could not be, put into words.

This book is difficult to categorize; while a novel, its form and movement recall an extended braided essay. However, what’s more important than genre is the fact that this book contains a coming-of-age story about a queer Vietnamese boy, the kind of story that isn’t often given page space in American literature. It comes at a fruitful time for Asian American creative production and representation, with the recent success of movies and shows (many adapted from books) like Crazy Rich Asians, Fresh Off the Boat, and To All the Boys I’ve Loved Before. Writers of the Vietnamese diaspora in particular have received a swell in interest, with Viet Thanh Nguyen’s novel The Sympathizer winning the 2016 Pulitzer Prize and Diana Khoi Nguyen’s poetry collection Ghost Of  becoming a 2018 National Book Award finalist. Vuong’s novel joins this wave of Asian American creative output and assertiveness, in which Asian American artists can and do represent themselves, staking out a space where many said that there was no room.

The letters in On Earth We’re Briefly Gorgeous can be read as love letters to the women who raised Little Dog and as a necessary and desperate expression of self for the narrator. The novel asks, who am I outside of how I appear to the world? The answer often lies in Little Dog’s investigation of beauty. “[A] woman gifted herself a new name—Lan—in that naming claimed herself beautiful, then made that beauty into something worth keeping. From that, a daughter was born, and from that daughter, a son. All this time I told myself we were born from war—but I was wrong, Ma. We were born from beauty.” This writer puts into his letters all of his hurt, happiness, and self-discovery—and in giving a name to those memories and experiences, he brings them into being.