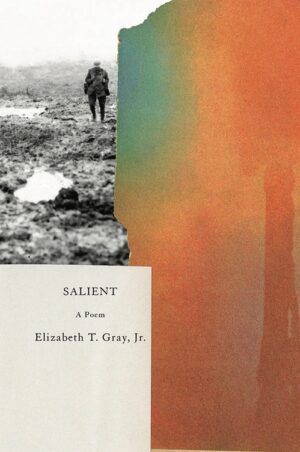 I had been looking forward to reading Elizabeth T. Gray, Jr.’s book about the Battle of Passchendaele. The book is called Salient and is all one poem. What is “salient” is what stands out, either in a material or geographical or metaphorical sense. It could be a outcrop of land thought by military commanders to be of strategic importance. It could be some implication or consequence of an event. Salient, the poem, is intricate and often gnarled. Its topics are carnage, obstruction, indecision, error, death, misrecognition, a condition of fundamental loss and lostness.

The poem’s tones are generally flat; the language is often taken from technical military manuals from WWI and from ancient Tibetan Buddhist texts on how to protect oneself from calamities. There are many characters, but they do not behave as characters. There are voices, but they are all voices of dead people. It is unclear which voices might be ascribed to Elizabeth Gray. There is no “poet’s voice.”

BUT YOU KNEW THIS

An obstacle or entanglement must be broad enough
to not be easily bridged and must be near enough
to be effectively watched at night.

To maintain the obstacle or entanglement
constant care is required. It must be inspected
every night. Resources should be assigned,

permanently, to its repair and improvement.
Every effort must be taken to conceal and protect it;
this is best done by sinking it in hollows or trenches.

Because close and constant observation will be required
loopholes are deemed to be essential.
Build them into your first line.

Were one a theorist of a generation ago, one might invoke Roland Barthes and the “middle voice,” neither active nor passive, a grammatical usage derived from ancient Greek to depict an action performed on another’s behalf, the way a priest might perform a sacrifice on behalf of a worshiper. There is something of that quality in Salient—a muddiness of agency, a fog, actions performed in the midst of chaos, injuries suffered from indeterminate sources. One might say that nothing stands out. Rather, there is a salience that is general, like the mist that is often referred to, or like the snow that is “general” in Joyce’s Dubliners.

INDIRECT FIRE: SHOOTING FROM THE MAP
(FROM APPENDIX B)

3.0      Fire is brought to bear on the desired object either by means of direct
observation, or by the map.

3.1     Obviously, what I am looking for can no longer be observed di-
rectly. Thus these maps.

4.0     There are difficulties inherent in using a map.

4.1.1     For example, this was the incorrect location of a farm that
was no longer there.

This is a severe problem, and this is where the Buddhist texts must be brought in. The book attempts to pay a debt of a history, and yet those who must be paid are all dead. According to the Buddhist texts, however, there are ways to reach them, to reach toward them, to find the lost ones. The book is an act of generosity. It is a hermetic book, but it is open. It provides guidance. I found in Salient something of a Whitman-like spirit. The poem will not let you go under. You may have to hold on with all your strength, but it is important that you make it across. The souls of so many dead in the lost terrain depend on your journey; and you, too, after all, are a soul in need.

The military manuals explain how things should go over the course of a battle. This will happen and then that will happen; if such and such is not immediately visible, then rely on observations from some other vantage; and then, you might find crucial bits of your flesh on and around barbed wire obstructions. The projections given in the manuals fly into withering masses of flesh-and-time-destroying demon mechanisms. The manuals cannot protect their charges, so Gray summons the Buddhist deities—too late to save the mortal lives, but perhaps in time to rescue the lost spirits and restore the broken topography. The book is full of “Amulet” poems: an “Amulet Against Madness,” an “Amulet Against Dismemberment,” an “Amulet Against Disappearance.”  Perhaps the book itself is an amulet.

Buddhism teaches that we must slip free of attachments, that we must regard material experience as illusory. Perhaps, if the dead can be persuaded that the manner of their deaths at Passchendaele were really no different from other deaths, that the wheels of existence and incarnation turn the same way for everyone, that they are not truly lost, then they can find themselves, and hell will depart our world.

But there are still, as Gray puts it, “actual things with characteristics.” One may try to “remain in a state / of detachment and integrate them / into your path as illusions.” Though it turns out that “the actual things with characteristics / were stubborn and well-led.” In the marvelous and terrible poem, “In the Soft Parts of the Body,” the first stanza presents descriptions of wounds from a medical manual (Military Surgery, 1915, by Dr. Edmond Delorme). These are terrible wounds, undoubtedly fatal:

[ … ] They are vast
erosions, deep furrows, large lesions often with significant
pieces of flesh hanging, fimbriated,
ecchymotic, contused, and frequently, in their deep parts, complicated
by metallic foreign bodies, by earth, by fragments
of clothing and thus doomed to suppuration and grave
complications, gangrene and
tetanus, for example.

The second stanza presents a Tibetan Buddhist healing charm (from Oracles and Demons of Tibet, by Rene de Nebesky-Wojkowitz):

[ … ] For such wounds use a simple mda’dar
fletched with crow, with a slender point of polished copper,
and its shaft painted red [ … ]
[ … ] Move a mirror
along the patient’s body until it reaches the source of his pain.
At this exact location set the arrow with its point
touching the wound and begin
to suck at the other end of the shaft.

The final stanza returns seamlessly to the medical manual: “In this way, clots of blood, / free splinters of shrapnel, and all tissue that has lost its vitality / are removed.” And the poem ends by prescribing an ointment “containing corrosive sublimate, salol, antipyrine, carbolic acid, / and iodoform, with Vaseline as an excipient.”

Neither empirical, experimental knowledge nor the wisdom and power of amulets can forestall the force of war, heal the massive injuries it produces, or retrieve and guide the souls adrift in the appalling, mismapped land. And, of course, poetry cannot either. So, what is this book of documents, magic, mapping, and speculation? It is a prayer, an imperative of reorientation. Gray knows that the dead are dead. What else would they be? Clearly, it is the living who need the orientation that Salient sets out, generously, to give.