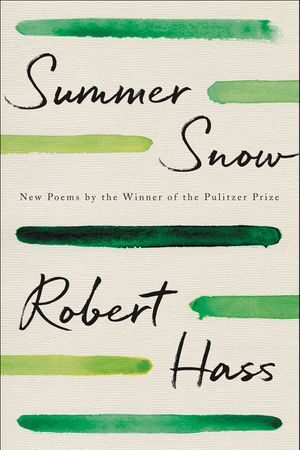 Summer Snow, Robert Hass’s first collection of poems in a decade, offers another feast for those who believe that each successive publication since his 1973 debut, Field Guide, has confirmed Hass’s early promise as one of the most talented and important voices of his generation. This late-career offering, weighing in at almost 180 pages, reveals a poet writing in the American romantic tradition while also grappling with international concerns. A fragment from “Nature Notes in the Morning” moves quickly from a Whitmanesque ego to images that arrest the attention with haiku-like concision:

What do I know from yesterday?
The blue bell of the gentian on the trail.
Hawk moths swarming in the scree.

Short sections like this one, presenting themselves as entries in a notebook, punctuate the sustained meditative lyrics that have long been a Hass signature. But while Hass’s earlier lyrics tended to be tightly focused and formally distilled, his style in Summer Snow moves toward a leisurely, if exacting, amplitude. Running to five long-lined pages, “An Argument about Poetics Imagined at Squaw Valley after A Night Walk under the Mountain” presents a fictionalized colloquy about politics and aesthetics with his late friend, the Polish Nobel laureate Czeslaw Milosz, who hears about a fellow writer sent to Auschwitz:

On the same spring day that he is contemplating
A large, polished porcelain giraffe bobbing up and down
To the strains of the Vienna Waltz on a holiday carousel
While gunfire crackles on the other side of the ghetto wall.

Hass’s unhurried meditations show a moral as well as aesthetic force: his willingness to linger on details—the crackling gunfire—prevents the reader from ignoring the horror on the other side of the ghetto wall. In the similarly expansive “Poem Not an Elegy in a Season of Elegies,” the poet eschews metaphor, with its power to condense, in favor of dwelling on particular memory of his recently deceased father-in-law, “who still belongs to being”:

[ … ] By the time we left the table,
He knew the names of the four children of the waitress
And their ages. This was after he had ordered coffee for us
And the beautiful green pears the Arabs fourteen hundred years ago
Had brought from Damascus to plant in al-Andalus.

Poetry for Hass is valuable as it enhances or extends the life beyond itself; it is not meant for a museum of polished artifacts. This conviction unites the collection’s notebook-like poems with its longer, more meditative works, and gives Summer Snow a powerful cumulative effect.

Poems like “Nature Notebook 2” and “Creech Notebook” highlight the two poles of Hass’s distinctive poetic witness: he sees the natural world immanent with epiphanies, and he sees how civil and political life violate that natural world. In the first of these two poems, his native northern California landscape is “all awash with angels”; in the second, he commemorates a trip to protest at the desert headquarters of military drones. Pointing to the relative inadequacy of his own language in “Patches of Snow in July,” Hass highlights nature as the source of moral beauty:

Coming into the valley, something about the way the grasses and wildflowers and trees climbed the mountains right up the tree line as if they were a young orchestra hitting high notes, and the way the white patches of snow in the saddles of bare rock between the massive peaks glittered in the sun undid me if that’s the right word. Undid. Woke up.

At the other extreme of Hass’s witnessing, “After Xue Di” imagines the aftermath of a car-bombing in Syria:

I thought of Humpty Dumpty—“All the king’s horses and all the
king’s men”—and that sanitary crews, picking hands, feet, less
identifiable gobbets of muscle and skin, with special gloves, lifting
maimed torsos into body bags and shoveling the intestines in after, are
the king’s horses and the king’s men, the ones who can’t sew it together again.

Incongruously framed by a child’s nursery rhyme, the graphic antipoetry testifies to the inhumanity in the human world.

Hass’s vision is, however, more often elegiac than apocalyptic. His series of life-stage elegies, while generically named (“Death in Childhood,” “Those Who Die in Their Twenties,” etc.), possess an emotional power derived from the particularities of the individuals commemorated: the delicate, inquisitive son of a friend, the misfit fellow graduate student who died by suicide. These poems go beyond inducing cathartic grief to suggest that loss brings the one who grieves a power of vision that is, in the end, redemptive:

[ … ] seeing
comes from a spring in us somewhere
near the beginning. Somewhere west
of where the dark falls.

Poetry can be about any subject, but in Hass’s work especially, it is in part always about itself. Whether he is weighing natural beauty against the dark forces of history, remembering other writers, or reflecting on telling a bedtime tale to his grandchildren, he is writing ars poetica, poetry that reflects upon itself as a way of perceiving and generating meaning. Hass invites readers to share in his process of meaning-making, in which poetry is part of a natural continuum of seeing and hearing and naming, rather than a separate realm:

[ … ] All you have to do is say the words
For some imagined others in a world of words, a lull of world
And words that make a world, or makes a seeing in the dark
As sheet lightning does, sometimes, at night, in summer fields.

In showing the process of imaginative meaning-making, and by delighting in the sensual and democratic powers of seeing and saying, Summer Snow succeeds in communicating poetry as a pleasure. And as William Carlos Williams once claimed, “If it ain’t a pleasure, it ain’t a poem.”