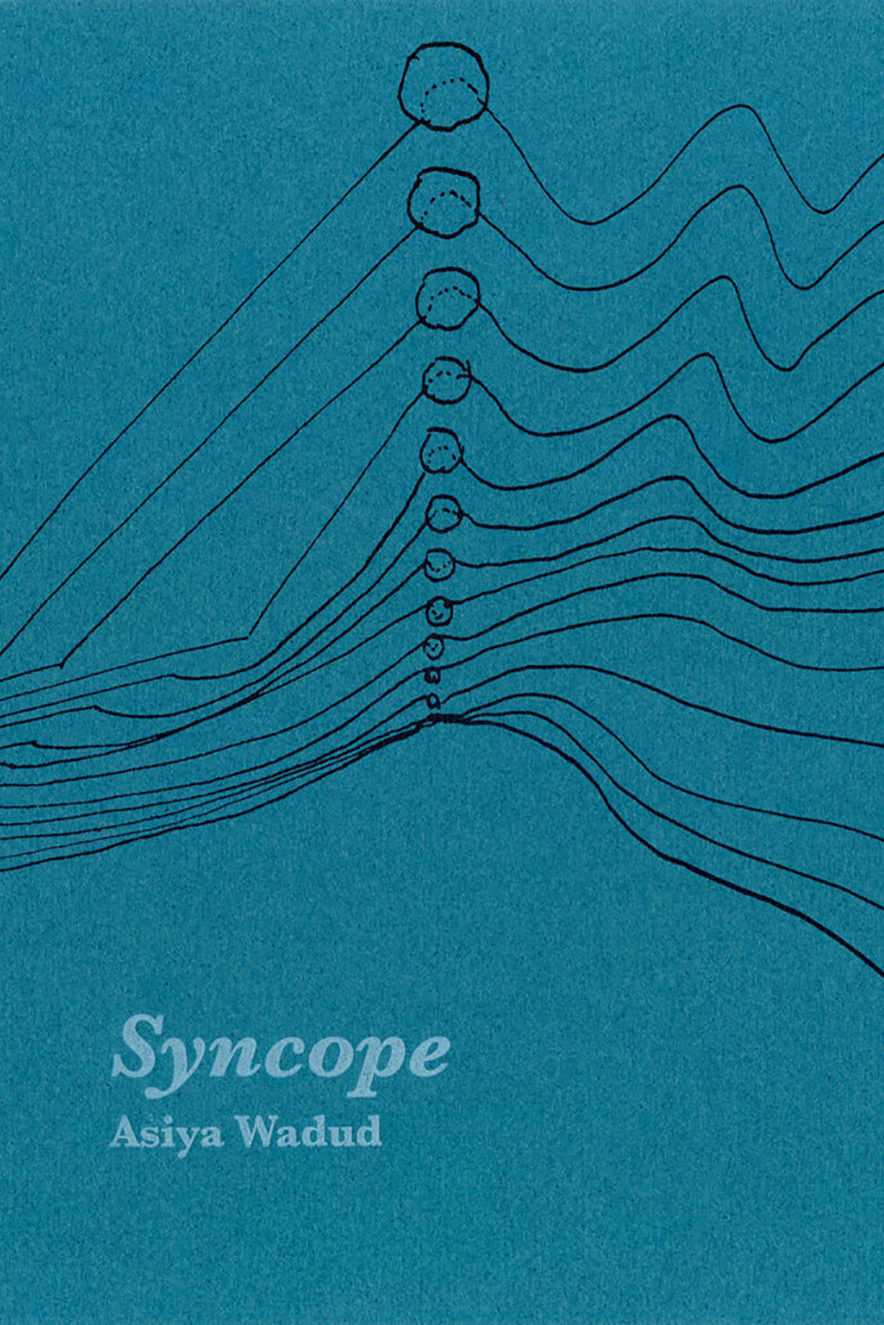 Asiya Wadud’s Syncope elegizes seventy-two African migrants’ attempt to flee Tripoli on March 27, 2011, during the Libyan uprising. Realizing that their boat did not have enough fuel to reach the Italian island of Lampedusa, the migrants called a Vatican priest via satellite phone. He contacted Rome’s Maritime Rescue Coordination Centre, which notified the Maltese coast guard and NATO in Naples. According to one of the survivors, the migrants encountered some fishermen, a helicopter that took photos from above, and a helicopter that lowered water bottles and biscuits. On March 28, the motor of the migrants’ boat stopped. No vessels responded to its distress signal, and the boat drifted back toward North Africa. After six days without food or water, half the boat’s passengers were dead. On day nine, a military ship took photos and moved on. On April 10, the boat washed ashore in Zliten, Libya. Two migrants died shortly after, leaving nine survivors.

Wadud uses poetry to investigate the left-to-die boat case and, in small part, to restore humanity to its victims and survivors. Syncope implies that organizations that had an ethical responsibility to act instead offered bureaucratic explanations, and our understanding of events has been clouded as a result. We must not, Wadud’s speaker tells us, characterize the situation as “tragedy / as if there were no fault to lay.” Restoring attention to the migrants’ lives, Syncope also extends literary tradition. Early nineteenth-century African American elegies, such as George Moses Horton’s “On the Death of Rebecca,” voiced a black reckoning with black experiences. Spirituals kept faith in an (afterlife) escape from oppression, a tradition shared by what W. E. B. Du Bois called “sorrow songs,” which Langston Hughes upended in blues poems that suggest not consolation but affirmation of spirit through woe. Contemporary poets such as Tracy K. Smith, Eduardo C. Corral, and Jericho Brown, in their poems on slavery, migration, and police shootings, navigate public mourning and elegy. And documentary poetics, as practiced by Muriel Rukeyser and many others, often responds to injustice through balancing factual, linguistic, and emotional elements. Like the poets mentioned above, Wadud reveals culpable power and mourns a host of losses in a plural first-person expression of the migrants’ experiences.

Syncope builds itself almost academically, returning to facts as often as to sentiment, while thinking beyond one particular event to clarify the constraints of living as a person of color. The book’s notes section references material relevant to the left-to-die boat case as well as to broader questions raised by the refugee crisis. One of the resources cited in this section is a talk with critic Saidiya Hartman and poet and critic Fred Moten, given at Duke University in 2016, in which Moten describes escape as “an activity [ … ] not an achievement. You don’t ever get escaped.” In a kind of marronage, migrants fled into the sea. Hartman adds that defeat does not stop the communal process of devising models through which such individuals might survive. Syncope takes up this challenge.

Formally, the book is one long poem, with a table of contents that isolates lines at irregular intervals. Hymns by the Ghanaian poet Kofi Awoonor and others appear, plus a combination of tautology and epizeuxis, as in “what is holy is holy” or “We know god is god is god is god,” recalling both scriptural rhetoric and Gertrude Stein’s use of repetition. In Syncope, repetition exists not purely for aesthetic purposes but to better parse chronology, decision, and consequence. Between repetitions, new context resituates duplicate stanzas. When the speaker repeats that “time ruptured and folded” four times across the book, the phrase enacts that fold within the reader’s experience. And the spare poem strives to achieve what is more commonly found in epics or prose: description of a civilization, sociocultural-psychological-geopolitical narration, and edification. Rather than lecturing an audience who already agrees, Wadud explores crisis through sound, pathos, abstraction, and image, saying in a migrant’s voice, “I will never know why my dapple fate / the sapling of it chose / me.”

Wadud concentrates on those ships that encountered the migrants but did nothing, or nearly nothing: “all ocular if they chose to be,” but they were “ocular eyes that saw nothing.” She implies that to see and not to act is a betrayal of the power of sight, which should be galvanizing. The book’s multi-definitional title—denoting loss of consciousness, omission of sounds or letters, or rhythmic stress on a usually unstressed beat—comments on the case and the public and institutional response to it: passing out, truncation, and redirection. The last definition highlights the poet’s shifting of attention from administrative excuses to personhood. In the vast Mediterranean, “we 72 are oil slick and black / hungry for a spot of water, bread / recognition as human,” the migrants say. Knowing themselves seen, but denied aid and ignored, makes the migrants question the worth of their existence. First “we doubted” and later, “we doubled down on our humanity because / the rescue boats / … shirked us.” That shift from doubting to doubling down reflects a blues poem’s movement between total despair and human affirmation.

Syncope’s simultaneously incantatory and documentary nature holds up the migrants’ humanity as supplication and as evidence. Its language rescues the reader’s memory of the dead. Rather than stave off death, it strives to reclaim the fact of these deaths. And in the final funereal stanzas and epigraphs of Syncope, Wadud reclaims the migrants from the sea’s drift: “we are the ruin / meanwhile / we are not ruined.”