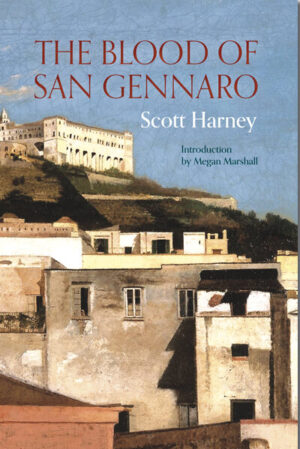 The Blood of San Gennaro

In “Education of the Poet,” Louise Glück describes the paradox at the heart of poetic vocation: “For those of us attempting dialogue with the great dead, it isn’t a matter of waiting: the judgment we wait for is made by the unborn; we can never, in our lifetimes, know it.” The poet’s Janus-faced predicament—engaging with literary forebears while awaiting judgment from future generations—is reason enough for a poet not to publish in his or her lifetime. Contemporary popularity, as Glück argues, is not a full measure of literary greatness.

When Scott Harney died in 2019 at the age of sixty-three, his partner, the biographer Megan Marshall, uncovered a trove of poems that spanned forty years. All but a handful were unpublished. Marshall’s edition introduces Harney to readers posthumously, but not—if we adopt Glück’s view—belatedly.

Harney was a startling love poet, working in the vein of Philip Larkin and George Meredith to locate a version of tenderness beyond skepticism. In the aubade “Days of Waking” he commemorates an early love rediscovered at mid-life.

I remember days I woke before you,
just to watch, as you slept on your side,
the sun begin to pool in the valley of your waist,
a landscape like the one that I imagined
you had come from, and I had yet to see:
California, still all dreamy lurid vistas
in my gray New England mind, the stuff
of labels slapped on farmers’ crates: Mission Bell
or Westward Ho, the produce combed
in perfect rows on slopes of weedless soil.

This stanza annunciates a signature theme in Harney’s poems: the pleasures of private life competing with the pull of the world beyond. The dissonance between ardor and advertising, desire and workaday survival are similarly addressed in the book’s title poem, which explores the role of ceremony—and poetry—in addressing the gap between lived experience and commercial idealization.

Gennaro, the patron saint of Naples, is celebrated at an annual feast day that showcases the “miracle” of the saint’s dried blood liquefied with agitation. It is stock theater, but Harney recasts the religious liturgy as one of pagan yearning.

How many days we wake and wish the rust
that was our blood, lost in the minor martyrdoms
of our lives, could flow again. Blood that dried
and stiffened the gauze of Band-Aids mother
peeled from our knees. Blood the bullies
drew from our noses. Blood of the first menses
or the last surgery. Blood of the rose
that melts in our dreams. Even if the latest theory
calls the blood hydrated iron oxide, quickly liquefied
when shaken, the miracle an ancient joke,
the faithful file in all afternoon to kiss the reliquary glass.

Medial caesuras cleverly enact the interruption of human wish and the fragility of the body. Returning to life after injury, to love after heartbreak, and to childhood haunts after loss of innocence are a motif in Harney’s poems, a way of measuring progression in time and in self-understanding. In other poems such as “Smokestack and Steeple” and “Charlestown, Denied,” the poet turns a skeptical eye on the illusory underpinnings of bourgeois American life: Calvinist redemption through labor, the ease of class mobility, and the natural ascendancy of the good.

There is also studied engagement with Robert Lowell, one of Harney’s professors at Harvard. In “Working in Pajamas,” for instance, Harney describes a job in Filene’s department store for “a wage / just above minimum,” selling sleepwear to patrons eager for wrinkle-free polyester. For Lowell, “working in pajamas” means something rather different: in his poem “Night Sweat,” the sleepless speaker feels “the creeping damp” of sweat “float over my pajamas’ wilted white” as he writes through the night, unable to sleep. Though Lowell’s speaker suffers profoundly from his insomnia, he has the luxury of being able to hunt the muse without having to attend to a workday of menial labor come morning. This is not the situation of Harney’s narrator who, later in life, meditates on a seagull that “still labors on against / the salty spit and wind that never ends,” a figure of ceaseless struggle.

Nowhere is Lowell’s example more evident than in Harney’s autobiographical narrative, “Getting Along in Charlestown,” which is akin to Lowell’s famous memoir “91 Revere Street” in rooting the poet’s sensibility in urban geography and familial misfortune. In Harney’s memoir, he details his father’s abandonment of the family and his mother’s retreat to city housing projects in her native Charlestown. Witnessing the busing riots in the 1970s, the young Harney protests for civil rights and against Vietnam, winning respect from his high school principal. His Charlestown neighborhood, while not geographically far from Lowell’s Beacon Hill, is another world, another version of Boston entirely. He tracks these gridlines of geography into his years as a scholarship student at an Ivy League university, where he first endeavored to make literary congruence—and music—of wide, sometimes incongruous experiences.

Harney chose not to publish most of his poems or to join the academy, working instead in social services and later in law. But his poems have a singularity that will find, in their audience, their full and future measure.