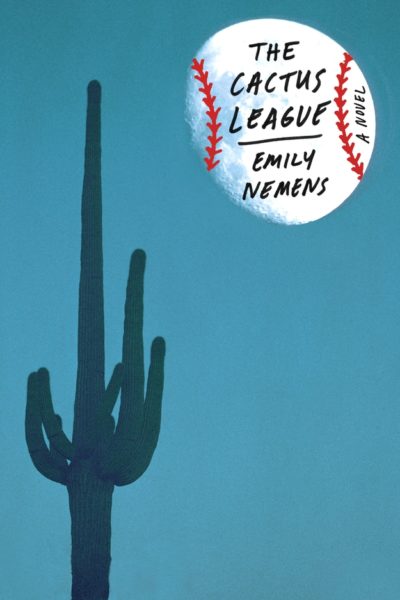 Emily Nemens believes in baseball. The editor of the Paris Review’s debut novel, The Cactus League, imagines a disparate cast of characters—coaches, ballplayers, the wives of ballplayers, front office personnel—who view baseball as a safeguard, an equalizer, a uniquely American venue that can still teach them a thing or two about themselves. It’s a hopeful view of a sport that’s lost significant cultural relevance in the past two decades. In the seventy-odd years since philosopher Jacques Barzun observed that anyone wishing to understand the heart and mind of America should study baseball, the country and the sport have dually changed. Ballpark attendances have dropped, national television ratings have decreased, and aesthetically baseball has morphed into an advanced analytic fever dream. In our politically tumultuous times singing “Take Me Out to the Ballgame” does not have the same unifying power that it once did. Yet in The Cactus League, baseball remains a sturdy vehicle to contemplate contemporary American culture, in addition to the whole dense spectrum of human relationships.

Each chapter of The Cactus League offers a study of a character caught in the orbit of the Los Angeles Lions, a fictional pro baseball team. There’s Michael Taylor, a hitting coach whose moral code is wondering what Joe DiMaggio would do in a given situation; Tamara Rowland, a middle-aged divorcée who sleeps with a new ballplayer every spring; William Goslin, a wide-eyed first-round draft pick struggling to live up to high expectations. One standout chapter examines Melissa Moyers, a self-proclaimed “baseball wife” who has conflated her social and emotional health with her husband’s playing career. Another story looks at Greg Carver, an injury-plagued starting pitcher on the brink of being cut. To a one, the stories contain minor moments of transcendence, dazzling excavations of psychological and emotional realization.

The thread that connects these otherwise singular stories is the novel’s narrator, an unnamed sportswriter who, late in his career, embarks on a project to investigate Jason Goodyear, the Lions’s star left fielder. His goal is to understand Goodyear from a variety of angles, hence the chapter-length character studies, each of which progresses the Goodyear saga forward. Between each narrative the sportswriter checks in, winks to the reader, and hurriedly tries to connect one chapter to the next. Every character in the novel is, in one way or another, spellbound by Goodyear. On the surface, he’s got it all: MVP awards, a hundred-fifty-million-dollar contract, a Nike endorsement deal, and movie-star good looks. But for all his charm, he’s an unknowable personality, an enigma even to his teammates. Goodyear’s reticence becomes cause for suspicion when, entering the 2011 spring training season in Scottsdale, Arizona, his life nosedives: his wife leaves him, he’s hemorrhaging money, and rumor has it he’s sleeping at the practice facility. The sportswriter’s job, as he sees it, is to sort out the rumors from the facts.

The narrative frame of The Cactus League occasionally enables Nemens to marshal the novel’s sprawl, with the sportswriter interspersing recurring thematic threads that might be too difficult to weave in otherwise. Yet too often the sportswriter’s sections break the spell of an otherwise spectacular read. He leans into abstraction (“a brief spell of lush life arrived with a big, splashing wall of water. The Lions ride that wall of water”), waxes poetic about inconsequential ideas, and traces the geological history of Arizona, trying to force metaphoric meaning between tectonic plate shifts and the MLB draft. But because the stories themselves rarely share the same interests as the sportswriter, his musings feel like the babblings of a curmudgeonly old-timer, someone who refers to his boss as a “dot-commer who looked younger than my son.” Moreover, the sportswriter fails to produce insights into Goodyear’s comportment or situation that are instructive enough to justify his omnipotence.

Luckily, the sportswriter occupies only a sliver of page space. The Cactus League shines brightest as a novel in linked stories, all nine of which are frequently excellent and superbly written, à la Louise Erdrich’s Love Medicine or Jennifer Egan’s A Visit from the Goon Squad. When Nemens dramatizes baseball, her prose sings:

Two men out, a runner on first. The stadium is loud and the afternoon bright, but to Greg it’s all muffled sound and hazy gray. He nods at the signal, pulls his arm back and snaps it forward, letting the ball fly. That release, and, a half second later, the slap of the ball in Jimmy’s mitt: with that, Greg Carver is gone.

Despite the unrealized presence of the sportswriter, The Cactus League is an often captivating debut novel that sparks new life into Barzun’s belief that baseball is an irreplaceable portal into the heart and mind of American life.