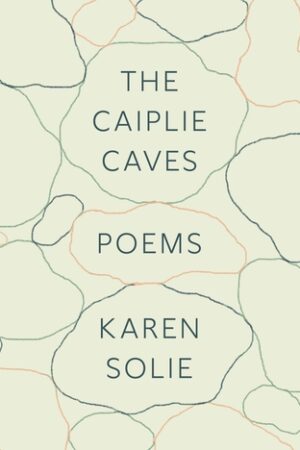 Karen Solie, one of the most decorated figures in contemporary Canadian poetry, has a keen eye for neglect, decay, ugliness, and nobodies. In other words, she is a student of human nature. Her early poems, published in the 1990s, feature reeking motels, sputtering cars, and children eating dirt.

The Caiplie Caves, her fifth book, spelunks in the mind of a real-life seventh-century Irish hermit named Ethernan. We know next to nothing about him. A 669 AD passage in the Annals of Ulster tells us that, depending on translation, he either “died among” or “was killed by” the Picts. Thus it is believed that Ethernan came to Scotland as a missionary. The Annals do not comment on his success in this pursuit.

Somehow he finds his way to the Caiplie Caves, located in Fife, and claims an empty one. In Solie’s version, the caves are crowded, with “a hermit in each like worms in cabbages.” Crowded isolation is the book’s opening chord.

In the collection’s preface, Solie notes with wicked understatement, “What is suprising is Ethernan’s poverty of supernatural accomplishments.” Other saints performed miracles, evangelized marine mammals, and toted their own severed heads around like pumpkins, whereas Ethernan “is said to have survived for a very long time on bread and water.” He spends most of his time in mental flagellation.

If The Caiplie Caves has a subject, it is the choice between an active and a contemplative life. From the mouth of his cave Ethernan can see May Island, a basalt hunk that looms out of the sea like a rotten molar, and he is tempted to build a priory on it. Or should he remain a hermit in his cave? When we meet Ethernan, he says of his new life in solitude, “Thus begins my apprenticeship to cowardice / no leeks sprang where I walked.” The Caiplie Caves asks if it is morally defensible to retreat—whether by poetry or religious contemplation—from worldly affairs. The book seems to answer that question with the fact of its own existence.

The poems in The Caiplie Caves come in two types: the Ethernan Poems, in which Solie speaks through the hermit, and the Karen poems, which seem more or less autobiographical. They occupy facing pages, suggesting a mirroring of personae. While Ethernan’s cave is a hollow in the rock, Karen Solie’s is lyric poetry.

The left-justified Karen poems are classic Solie: hymns to senescence, philosophically restless meditations, and litanies of human foolishness. Some take historical subjects, as in “Whose Deaths Were Recorded Officially as Casualties of ‘The Battle of May Island,’” which relates an incident in World War I when British ships accidentally rammed and sank their own vessels in a heavy Scottish fog. Others are more bucolic: in “A Plenitude,” the speaker makes a list of Hibernian wildflowers.

The Karen poems are good, but they feel dutiful, as though commissioned by an editor. Solie’s control is never in question, but the emotional current ebbs, and in a few parched places, the Karen poems are museum exhibits of clever syntax. The reader admires them and moves on.

The right-justified Ethernan poems are something different and better. In them, Solie takes her place among our best contemporary poets. In every poetic generation, vocabularies form and habits ossify: poets write with a desire to be recognized as a member of the guild, and in doing so come to sound like one another. Today, this means poems full of words like “astonishment” and “body.” Solie, by contrast, respects language enough to mistrust it—and in mistrusting it, she renews it. Here Ethernan watches a priest approach:

can a person be trusted whose principles forbid despair?

I spot the cleric from a distance by his wide sleeves

his minor build’s angle of progress

that iron bell a tiresome associate, a bit much

and I will soon be in earshot of his sentences

It is strange that these six lines are so burly, so good, when they give us only two sensory details: “wide sleeves” and “iron bell,” both of which are prototypically anticlerical. Solie’s gift is not so much her vivid imagery as her ability to make us see thought. She can shape a body without giving concrete details, as with “his minor build’s angle of progress,” or sketch an entire personality with a jab: “he looks like someone who sleeps for pleasure,” which suggests, among other things, a face shaped by a puritanical aversion to minor vices.

Solie’s primary allegiance is to the knurled surface of language, but she is equally capable of handling ideas. In the best parts of The Caiplie Caves she engages with Ethernan’s theology of self-abnegation without a modern’s condescension. The resulting persona is a hermit plausible in both centuries, crouching in indecision, resenting inanimate objects, and picking at mental scabs:

and flourished in an argument

that the authentic sacrifice is pure mind, clean spirit

I offer cold, the season working as it should

loneliness, love working as it should

pain, the body working as it should

a thought indulged in isolation is almost certainly an error

and raw chill I suppose I’m expected to defeat

as a matter of principle

Ethernan’s mild disdain for everything (“a raw chill I suppose I’m expected to defeat”) and everyone (“Servanus, desiring a place less pleasant”) manifests as icy understatement. It is this delicacy of emotional calibration that allows Solie to plunk words like “love,” “loneliness,” and “pain” into a poem without capsizing it.

One quibble: sometimes Solie tugs an overplucked string of North American lyric poetry. I call it the “epigram string.” It is bombastic, totalizing, and supposed to be memorable. Mary Kinzie, in her essay of the same name, called it the “rhapsodic fallacy.” Often the poet puts an abstraction in the poem’s place of honor. Think of the ending of James Wright’s famous short poem “Lying in a Hammock at William Duffy’s Farm in Pine Island, Minnesota”: “I have wasted my life.” Lines like this can produce an unearned sense of certainty and finality.

The Caiplie Caves has some of these flourishes. The first Karen poem ends with, “What is a self but that which fights the cold?” Then, in reference to monks’ cells: “A cell / can teach you everything. All it asks is / you give it your mind.” Another poem discusses the twelve rungs of the Desert Fathers’ ladder of perfection and closes with, “All you have to do to climb the last one is to die.” Finally, a slightly cloying example comes in the middle of a poem about tidal pools: “I see nothing fallen here.” Notice the totalizing words: “everything,” “all,” and “nothing,” so loud in the midst of Solie’s quiet mastery.

These minor lapses, if they are lapses, do little to harm the excellence of the Ethernan poems. The Caiplie Caves is Solie’s best work yet, full of true, beautiful, menacing things. Ethernan is a fresh mineshaft into human murkiness. I read The Caiplie Caves twice, and both times I grew sad when it was over.