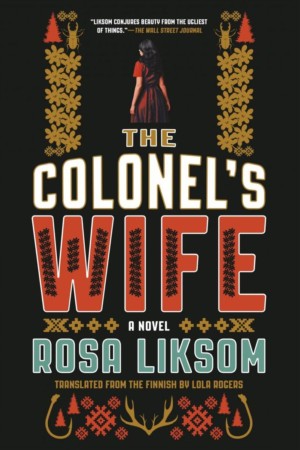 In her 1945 “Organized Guilt and Universal Responsibility,” Hannah Arendt wonders how those still alive at the end of the Second World War might go about “confronting a people among whom the boundaries dividing criminals from normal persons, the guilty from the innocent, have been so completely effaced that nobody will be able to tell … whether … he is dealing with a secret hero or a former mass murderer.” The Colonel’s Wife, the fourth novel by the Finnish writer and artist Rosa Liksom, presents a narrator whose level of responsibility for the horrors perpetrated by the Third Reich proves difficult to assess. On the one hand, the novel makes clear that she is, if not herself a murderer, certainly an enthusiastic supporter of German fascism. On the other hand, her resistance to the authoritarian tendencies of her longtime husband might prompt some readers to view her as a secret heroine.

Now an elderly woman, the Colonel’s wife looks back on a life in which the Colonel (his title always, in the novel, capitalized) has been a constant, domineering presence. He was in the military with her father during WWI as part of a group covertly allied with the Germans even as Finland officially remained part of the Russian Empire. While the narrator is still a child, her father dies, and the Colonel begins running the household in his stead. The narrator spends her youth attending nationalist rallies, believing that “Finland needed a tough leader,” and that “the fatherland is a treasure for which no sacrifice is ever in vain.” Perhaps inevitably, the personal and the political combine when a sexual relationship between the narrator and the Colonel begins: “[S]omebody knocked at the window … in the middle of the night. It was the Colonel. I let him in. He smelled of cigars and shaving cream, just like my dad used to smell. We went straight to bed … ”

The narrator knows enough about the Colonel’s past to be aware that he has done some horrible things. Nonetheless, she finds him endlessly captivating and refuses to listen to any criticism of him, even from his own mother. She willingly accompanies him on his travels to Germany, where he meets with high-level Nazi officials who, in the late 1930s and early 1940s, are supporting Finland in its territorial conflicts against the Soviet Union. (Several real historical figures, including Hitler and Himmler, make cameo appearances in the book.) Still, though she may be blinded by love, the novel makes clear that the narrator cannot plead political naivete or ignorance: “I knew. And so did everyone else in Finland. If you knew how to read, you knew what the Nazis were doing.”

And yet, coexisting uneasily with the narrator’s fascist sympathies are her feminist credentials. Discovering the dearth of wilderness survival books written by women, she determines to write one herself and discovers that “[I]t was easy. The words gushed out of me onto the paper. … It was like a dam broke and all the words that had been waiting behind it were released.” At first the Colonel is supportive of her efforts, but after her book gets published, he protests that her writing is “[taking her] thoughts away from him.” In an act of quiet disobedience, the narrator starts “putting words to paper in secret,” explaining that she cannot stop, now she has begun, since she has come to feel that “the only time I existed was when I was writing.”

As the war goes on and the Colonel ages, he becomes increasingly violent toward his wife. From his perspective, the political terrain has shifted in alarming ways: Finland has made peace with the Soviets, and the Nazis—to whom he remains ideologically sympathetic—have officially gone from cobelligerents to enemies. From the perspective of this American reader, the novel’s commentary on Finnish political and military history is fascinating, as Finland’s unique role in WWII is not often highlighted in American accounts. As the novel goes on, however, this political context falls away, and we are left with the harrowing testimony of a woman in an abusive marriage doing everything she can to escape this “shared hell.” This shift in narrative focus appears to be a strategy for making the Colonel’s wife a more sympathetic character, though the detailed account of her political views in the previous pages inevitably limits the success of this effort.

The Colonel himself is such an unrelentingly awful person that he can sustain narrative interest for only so long; at a certain point, reading about his behavior feels like an exercise in making oneself sick. However, just as one prepares to finish this dark book and, perhaps, to breathe a sigh of relief, the narrator has a revelation that casts her entire story in a different light. So is the Colonel’s wife to be condemned for her complicity or admired for her resistance? Liksom deserves credit for crafting a novel that captures both the urgency of this question and the difficulty of answering it.