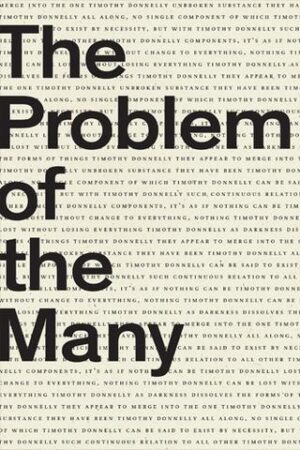 The Problem of the Many

How do you draw a line around a cloud? It’s a harder question than it seems. If a haze of water droplets surrounds every cloud, and we can’t pinpoint where in this haze the cloud’s edge falls, then there is not one cloud, but many possible clouds of minutely different sizes—an infinity of clouds, or maybe none at all.

This philosophical problem is the subject of Peter Unger’s 1980 essay, “The Problem of the Many.” It’s also a central theme of Timothy Donnelly’s poetry collection of the same name—though for Donnelly, the borderlessness of the cloud is a figure for a more general kind of fluidity, and embracing a world without clear definitions is a way to resist capitalism. In drawing distinctions, says the speaker of the title poem, one is “making a claim / about what is, and is not, reality, which droplets belong to the cloud / legitimately, which are left out.” Only by resisting this impulse to impose order on reality can we build a world in which all are included.

Clouds are among Donnelly’s favorite symbols: his last book, which won the Kingsley Tufts Poetry Award and offered a rumination on the paradoxes of consumer society, was titled The Cloud Corporation (2010). Both The Cloud Corporation and The Problem of the Many critique neoliberalism; both are fast-moving, witty, and packed with allusions; both unfold across a large body of long-lined and syntactically acrobatic poems.

Each of the four sections of The Problem of the Many ends with a long poem, and it is in these that the new collection’s boldness is most evident. In “Hymn to Life,” Donnelly tells the stories of a long list of extinct species, indexing many to the moments in human history, art, and pop culture that coincided with their disappearance. As Donnelly rapidly moves from the fate of the Banks Island musk ox to Katy Perry’s “Roar” to Rainer Maria Rilke, his despair is palpable. How, he seems to ask, can the human creative impulse be at once so beautiful and so dangerous to other kinds of life?

In “After Callimachus,” the longest of these long poems, Donnelly travels along the supply chain of Dairy Queen’s “Fritos Taco Grande BeltBuster” burger, contemplating how our urge to control the world through science has resulted in a mixed-up, uncontrollable world, one where the DNA of the Arctic flounder is spliced into tomatoes. Yet Donnelly remains conflicted, no more comfortable with blanket denunciations than he is in “Hymn to Life.” What drives us to control is not so far from what moves us to create: staring at the night sky, Donnelly realizes that “the only way to make life bearable” is still “to make it.” Across these long poems, and in particular in “After Callimachus,” he tries on a half-dozen new and often rigorous forms, departing from his habitual Wallace Stevens-esque tercets. Donnelly long ago mastered the deft line breaks that make his data-dense sentences comprehensible, and here his talent for formalism dazzles as he integrates tightly patterned eleven-line stanzas and disjointed, scattered verse into a single poem.

For Donnelly, our favorite modern tools—science, economics—are no more able to define a human than they are to define a cloud. Such skepticism will be familiar to readers of The Cloud Corporation. Where The Problem of the Many deepens Donnelly’s engagement with Unger’s philosophical problem is in its genuine concern for other individuals. In his earlier work, Donnelly moved quickly from the real to the abstract, his awareness of social problems tipping him into what Stephanie Burt has described as a mode of “pessimistic introspection.” In this new volume, by contrast, he explores the world’s fractures with care and cautious optimism.

“Mutual Life” finds Donnelly reaching new heights of empathy as he follows an unnamed writer through the lobby of an insurance company. After casting writing and life insurance as two ways of staving off the fear of death, Donnelly almost makes his reflexive critical move, beginning to rebuke the writer figure for his mortal arrogance. Instead, he forgives him, alongside the “figures of speech” and the literary “forebears” that the writer represents. At other points in the collection, Donnelly even imagines a new lyric collectivity. In “The Human,” hidden behind the collection’s acknowledgements, Donnelly surfaces from a meditation on Aristotle’s Politics to say:

[ … ] And when I close my eyes to brace against
the late imperial effects of it, I feel a forebear step forward

from a cave in thought, its arms extended as if to take part
bodily in the beauty of what we call sky, and through some new

distortion in the throat, indicates what the many, still situated
in dark behind us, come one by one to tremble at the mouth to see.

The belief that we might, together, find our way back to a prehistoric, unpolluted speech—one free from “imperial effects”—is not a concrete political program. But from a poet who has previously been so inward-looking and pessimistic, it is a refreshing step forward.

Reviewing The Cloud Corporation in the New Yorker, Dan Chiasson described the collection as a “poetry of staying in”—that is to say, a poetry of the highly educated internet addict, the critic holed up in his apartment. The Problem of the Many also features great indoor poems, but its ambition reaches outside Donnelly’s home and head. Most philosophers who tackle Unger’s problem hope to pin down a single cloud within the puzzle’s haze. Donnelly hopes for the opposite: that by blurring the systems of knowledge that make us want to draw borders around the cloud, he can weaken other kinds of borders: national, social, political. As Donnelly writes in his title poem, “To open oneself” is “a dismantling / into expanse, definitionless, unexploitable, which is to say as enemy / of the state.”