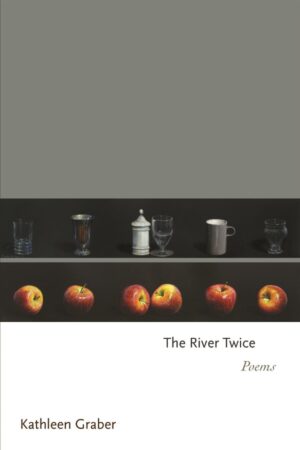 In this time rocked by pandemic and protests, Kathleen Graber offers poems that examine the nature of communion and communication. Troubled by divisive political rhetoric and the way language has been weaponized in the age of Trump, the speaker must nevertheless trust her own words—to tell us about mounting bills, a missing cat, divorce, sickness, and the loss of a loved one. Between the political and the personal, despair and hope, she finds salvation in the knowledge that the tiny earless Gardiner frog “listens / to the world though its opened mouth” and croaks back. Graber puts all that fear, concern, and hope into verbal music, threading the magic connections of everyday life—the bad and the good—into a timely poetry that takes a hard look at our dystopia, confirming, despite everything, that “like the universe, you & I are here today, / going on & on ….”

In the first of the collection’s four masterful self-portraits (“Self-Portrait with No Internal Navigation”), she pivots on the word “arrest” to consider the beauty born of destruction:

Have you ever been arrested? The pigeon arrests me.
No, not the wing but the sturdy round body & the sheen
of the throat, like the interior of a snail’s shell or the bruise
of spring—think of the lilac blistered with blossoms,
of a burned moor’s sudden explosion into heather—
a beauty we expect only from what’s broken.

Much is broken in Graber’s world of environmental degradation, economic disparity, and deadly societal tensions. Her single speaker tries to work through these problems while wondering if there is such a thing as a reliable self—“Sometimes I say I, as though someone / might still believe there could be a coherent, distinct self in here.” And if there is a “self,” what is its relationship to the “other” or a collective “we”? In the same way we might keep driving an old troublesome car because it gets us to work, the poet keeps talking.

Graber’s natural yet erudite voice wanders elegantly in considerations of fluidity and impermanence as she evokes Heraclitus’s famous fragment, “You cannot step twice into the same river.’’ But she also reaffirms Faulkner’s assertion that “the past is never dead,” suggesting that “we also relearn daily to endure what we cannot change.” One might initially be put off by Graber’s fulsome epigraphs and copious endnotes, but the speaker’s voice provides intelligent company that is also warm and engaging.

As part of her remarkable tapestry of quotidian and transcendent life, Graber includes eight “America” poems that address the nation in the sincere and cynical spirit of  Whitman, Langston Hughes, and Ginsberg:

America [ … ]
[ … ] there is something wrong
with your peaches. The ones from the supermarket
are so soft & cheap—half the cost of the ones
sold at the local farm—but the flesh near the pit
is so bitter & green. It is a fruit like the mind
we are making together: both overripe and immature.

She nonetheless appreciates the subtle beauty and efficiency of American suburban life:

Trust me, I still have the simple tastes you gave me:
I am delighted by the common robins & cardinals,
the way they set trees at dusk aflame. Thank you
for Tuesday’s reliable trash collection.

And yet, as if speaking to a parent, she questions the expectations of the nation.

[ … ] I don’t remember ever thinking I was invincible—
though I must have thought you were—though we say now
that that’s what all kids think. You are our world-
body, you, who taught us each thing wants only to be more.

Graber does want us to “be more.” This is difficult when we cannot make things go the way we hoped. In one of the book’s many insightful relationship poems, “Self-Portrait with Moon,” the speaker admits, “I have no idea why my parents didn’t get along. / Why each of us seems to wake some mornings / asking, Why can’t I just do whatever I want? ”

Like much of the book, this poem’s examination of want—in the self, and in others—snuggles together two seemingly opposite yearnings, showing equal empathy for those with outwardly heroic dreams and those with intimately romantic desires.

Somewhere in Antarctica a man is setting out alone
on foot. He has left behind his wife & children
These adventures, he says, are very selfish odysseys.
He has a sled but no dogs. He wants to pull the sled
himself. He plans to cross a continent hauling
everything he will need for the journey behind him
in orange sacks. For years I had hair to my waist
& what I wanted was for a man to want to brush it
every night for the rest of our lives. I thought that
that was how love must feel. Soft boar bristles
pulling the oil through until each strand shone.

These wishes complement one another in their difference, like the bonds holding together much of the collection, which alternates between expansive, leaping poems with long lines and drops (à la Charles Wright) and more conventionally lineated pieces that are dense and dazzling in their lucid directness (think of Jack Gilbert). Maintaining this balance, in both form and content, The River Twice considers the family—“Our mother was a black Singer sewing machine. Our father, a pair of red dice”—and the nation—“America, how do we feel / as we hover again under the lintel, caught between / stoic resolve & some impulse toward wild action?”

Negotiating the psyche and cosmos, the speaker says, “I find it easy / to both believe & not believe that I think; therefore, I am,” then asks a moment later, “Are we moving nearer or, / like the stars, farther apart?” The River Twice does bring us closer to ourselves and others, maybe because its accessible meditations and parables are fashioned from “the love of the tongue” and “the rhetoric of the soul.”