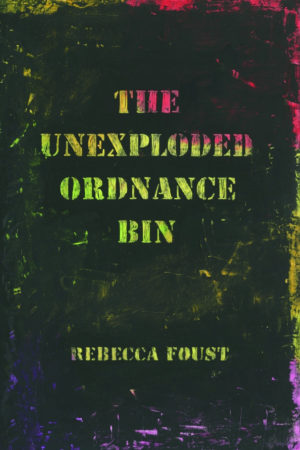 Rebecca Foust’s latest collection of poems, The Unexploded Ordnance Bin, winner of the 2018 Swan Scythe Press chapbook award, is more than just a gathering of excellent poems: it is a closely interwoven unit waiting for its readers to explode its meanings. Divided in three sections of unequal length, the book centers on various difficult life journeys: the first (and longest) about the speaker’s autistic son, the second about suffering children worldwide, the third about her transgender daughter’s transition. Just as the son in the first poem, “Only,” speaks with his heart, so does the collection’s single speaker/mother, while never indulging in self-pity or sentimentality. She functions as a seer, watching others undergo their odysseys, trying all the while to keep a home for them, a home not able to protect them against the trials they will endure.

The first poem, one of five sonnets in the chapbook, embeds oppositions in its couplets. In one couplet, the speaker’s son is born. Through an enjambment to the following couplet, the son’s head is cut off: “my son was born. The cord was torn / too soon, so they cut off // his head to save his heart … .” These tight antitheses reveal a world where life and death become interchangeable. Though the third couplet states that “He lived for a long time,” in the final stanza the speaker tells us twice: “Some say he died.” The poem’s major opposition is between the “green” of the birthing room’s walls, where humans cut her son apart, and the beautiful natural world he comes to inhabit. In the rest of Section I the son finds solace in that natural world, but also in technology: “He collects horseshoe-crab trash / knowing and naming each slender spire”; and “Shared obsession and fixed gaze, six of them / brood over three rebuilt monitors.”

Section II begins at the speaker’s home, then expands from the son’s suffering to other suffering worldwide. Now we have Miguel, whose mother is undocumented. Like the son in “Only,” he also sings: “dog sounds, / hello sounds, good-bye sounds,” all “round, hollow vowels.” The speaker widens her view from Miguel in the US to Dachau, with its nearby tidy village “about as close to the camp / as the ICE Deportation Center in the town / next to mine,” perhaps suggesting that we are all complicit in humanity’s historical cruelties. In “Remembrance of Things Past,” the speaker moves her attention to the revocation of the Dream Act, and then to the deaths, in 2001, of fourteen immigrants crossing the border near Yuma, Arizona. Here is song, again: “A lullaby of cries / and soft curses.” In the following villanelle, “Requiem Mass for the Yuma Fourteen,” they are remembered with a refrain musical in its repetition and its content: “The desert composes its requiem.” Section II ends with “Flame,” dedicated to a female Palestinian suicide bomber. This poem ends in silence, an erasure of the music found in earlier poems: “and silence, in one thin flame / rising.”

The final section begins in the natural world, with the image of a dolphin mother moving with a calf at its side, recalling the speaker’s own children.

In “Free,” the speaker dwells on the initial separation of mother and child that occurs when the umbilical chord is cut, with her hope that her child might be “restored,” not as the sleeping child but as “the child who / woke & was finally able to be.” Here, the poem’s final word offers an exact rhyme with its title, the circle of life completed. “Prodigal,” however, ironizes the possibility that the child may return. The first septet evokes both the mother’s loss in childbirth and, despite her losses, her persistent belief in miracles. The second septet parodies various miracles that are too ridiculous to ever occur, such as

Medea’s kids sung to and snug in their bed,
truth in the news, the world intact in a bead
of dew, and—bound fast to me—you.

Unexploded Ordnance Bin concludes with “Second Gratitude,” a brilliant return-with-a-difference. In “Autism,” the second poem in the book, the mother “walks the dark corridor of future alone,” not knowing how to protect her son. Now, in the concluding poem, she and the two children’s father have “figured out Pandora,” the music streaming platform, and found their “old music” again. She has not been able to protect her two children, but she knows how her daughter feels now, reveling in that certainty by repeating the word “know” five times in this short poem. “I know I’ll call and you won’t answer / and still I’ll call,” she admits. Now the speaker’s heart, like the hospital walls in the first poem, is “green.” In a stunning ending to the collection, she announces, “and I remember all the words”—not only the words to a song playing on Pandora, but the language to write these poems, verbal melodies that communicate the deep suffering and love that permeates her life.