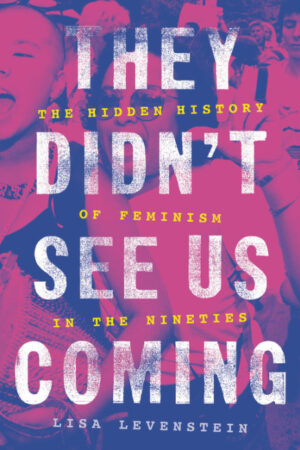 They Didn’t See Us Coming

Lisa Levenstein, a scholar of feminist politics and women’s history, is interested in what’s obscured by headlines: the engines of social change that push forward, shaping a more equitable world. In this follow-up to her 2009 book A Movement without Marches, the UNC Greensboro history professor argues that the 1990s was a transitional decade that saw the women’s movement become global, multiracial, and coalition-driven. She points to Time magazine’s 1998 cover story that asked, “Is Feminism Dead?” The consensus was yes, which only proves how out of touch mainstream media can be. Did the popular imagination still need to see the image of white 1960s radicals? Feminism had moved on, and during the nineties was being debated and redefined by women of color in the US and activists in the Global South.

Driving the activism of these groups was the belief that every social justice issue was also a feminist issue. Feminism simply lived in a broad tent. Levenstein points out that from 1982 to 1995, the number of US-based feminist groups grew from 75 to 140, with concerns including domestic violence, abortion rights, labor organizing, disability rights, lesbian rights, health and welfare, and economic inequality. This chorus of intersectional voices had grown wise on the work of feminist scholars like bell hooks and Charlotte Bunch, and, over time, would extend their reach via the Internet and social media. “By the end of the 1990s,” writes Levenstein, “anyone looking for feminism no longer needed to attend a march or a conference. All they needed was a modem, a computer, and a phone line.” Discussion boards and LISTSERVs allowed women to organize, strategize, raise money, and, eventually, offer alternative news coverage.

Another part of this sea change was the refusal of women of color to be tokenized, even as white women leading organizations like the Ms. Foundation and the National Organization for Women needed their diverse perspectives. Many activists of color, like the Latina health rights advocate Luz Alvarez Martinez, refused invitations to white-dominated conferences. Others brought their own agendas, as did the delegates sent by the Ms. Foundation to the 1995 UN Fourth World Conference on Women in Beijing. The Foundation had planned a two-day orientation to introduce these Americans to the themes of global feminism that its white organizers deemed important, but women of color activists replaced it with their own sessions, upending months of careful planning. In the end, Ms. Foundation delegates agreed that the future of feminism needed buy-in from a broad base that would represent all their concerns.

Levenstein uses the 1995 conference to prove her point that by spotlighting then-First Lady Hillary Clinton’s appearance, most US media ignored its role as a crucible for grassroots activism on a global scale. Of the eight thousand Americans who traveled to China, more than a thousand were women of color, who had a chance to learn from and build coalitions with 22,000 activists from other countries. Relationships forged during those ten days would result in new energy, objectives, and even new organizations like the National Asian Pacific American Women’s Forum.

Like nothing else, this history-making event showcased how much American activists had to learn from their global counterparts, like the disastrous effects that neoliberal economic policies and the structural adjustment programs of the IMF and World Bank had on women. Reacting to then-President Clinton’s welfare reform legislation, one activist commented that she learned that “the US was actually enacting welfare reform all over the world.” For Levenstein, tracking down and interviewing those who had attended the conference was a revelation: “Finding these generative forms of activism convinced me that this period I lived through—and had thought I knew—deserved the kind of historical scrutiny heretofore reserved for the women’s movements of the 1960s and 1970s.” Levenstein’s objective to offer this “largely forgotten history” the appropriate attention is realized through these interviews and archival research.

In her final chapter, Levenstein profiles three nonprofits created by women of color and lesbians: INCITE! Women of Color Against Violence, the SisterSong: Women of Color Reproductive Justice Collective, and Southerners on New Ground (SONG), all of which had been sidelined by other feminist groups. Whereas white women focused on sexism, for example, women of color tended to see these forms of injustice more holistically, linking sexism to racism and economic inequality. “It seemed like we were speaking different languages,” is how Beth Richie of INCITE! described the schism. It led to their organizing independently. In the 2010s, all three groups found common cause with Black Lives Matter, a powerful example of what a social movement can accomplish.

By shining a light on history at the margins, Levenstein shows us that our cultural life is complex, multifaceted. The work done in the 1990s by the activists she interviewed—advocates for a wide spectrum of social causes—laid the foundation for today’s feminist energy. After all, Levenstein reminds us, the 2017 Women’s March that galvanized millions of people worldwide was launched with a single Facebook post.