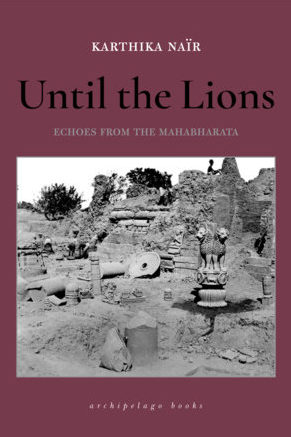 The Mahabharata, the larger of India’s two epics, was composed roughly 2,000 years ago. This literary hulk of 100,000 verses (200,000 lines) narrates the multigenerational story of two groups of cousins that battle each other for political power. The blood-soaked epic is rooted in patriarchal soil: it is men whose greed leads to war, men who fight, and men who, in the end, lie dead on the battlefield.

Karthika Naïr’s Until the Lions lets loose the pent-up voices of the epic’s women, whose lives have been turned upside down by their testosterone-driven husbands. Written in a mix of poetry and prose, the book highlights fourteen women and a few other marginalized figures (three male characters, a serpent queen, and a dog) who are not afraid to speak their minds. They curse the lust for power that drives men to battle, denounce the folly and futility of war, and lament the death of their husbands.

Placing the women of ancient literature center stage is nothing new. Over the last quarter-century, this tradition has gained momentum with works such as Anita Diamant’s The Red Tent (the story of biblical Dinah), Madeline Miller’s Circe, and Sarah Ruhl’s play Eurydice. In India, authors have modernized, parodied, and retold India’s two epics for centuries, and a religious cult developed in Tamil Nadu around Draupadi, the main female character of the Mahabharata. Until the Lions adds a brilliant new thread to this rich literary tapestry.

The book begins with a dramatic monologue by Satyavati, the progenitor of the Kuru Dynasty, whose piercing words foreshadow the destruction of her lineage.

Listen. Listen: hate rises, hate blazes, hate billows from battlefields. Hate arrives — searing rivers, shriveling plains, reaping deserts on its path — even to this doorstep, to rule the roost, now hate arrives to gorge our mountains in serpentine maws, to smother fir and spruce and hemlock, to parch my blameless sky into white dust so embers fall as stars.

In reading Naïr’s book, I felt as if I had scratched the surface of a palimpsest (the epic) and discovered a room teeming with three-dimensional living souls. Standing on the sidelines of the action, the women seem to have transcended the daily hustle and bustle of their men’s lives with all its wheeling and dealing, philosophical debates, and hair-splitting arguments about sacred duty (dharma). Here, I tasted their anguish as they railed against false notions of honor, magically changed form and gender to take revenge, or hatched a vicious plot to get their daughters-in-law pregnant.

But most of all, Naïr’s characters reveal their inner selves. Grief pours from their hearts, reminding us of the ritual lamentations of women in Homer’s Iliad and the Greek tragedies. The misfortune of Naïr’s women shouts out from the page, as if they’ve been chomping at the bit for two millennia to share their miserable fate. It is as if they are saying to us, “you’ve read the Mahabharata with its adventures and moralizing; now hear how it all feels to us women.” We are left with pure emotion, the distilled nectar of the epic.

Naïr uses a host of poetic forms to give expression to, and differentiate, her characters. Among them are the Spanish glosa, the Malay pantoum, the Provençal sestina, and the Pashtun landay. This diverse palette of forms, with text sometimes presented in visual shapes, adds musicality, cadence, and an emotional intensity not found in the epic’s strict “sloka” form (distichs consisting of two lines of sixteen syllables each, or of four octosyllabic hemistichs).

The following lines are spoken by a nameless foot soldier dying on the battlefield of Kurukshetra at the war’s end. He utters these disjointed words to his father,

Through the spacing of words, we feel the man’s gasping as he loses touch with a world made barren by war, both physically and spiritually.

One of the book’s most touching passages is spoken by Vyasa, the legendary author of the Mahabharata. Vyasa tells his mother of his visions—how each member of the Kuru clan, all relatives, will meet his or her fate. He laments that he can see the tragic events about to unfold and write them down, but he is unable to change them.

I could see their blood-soaked destinies as though they were already legend. I see all the time, for it must be written, and each vision scars my mind, leaves nerves and muscles mangled.

Vyasa is a sage, a wise old man much revered in the epic. Ironically, he has something in common with the marginalized women: he is a witness, not an actor, and cannot change the events at hand or to come. (For this reason, he urges his mother to go away with him so that she will be spared the coming carnage.)

The concept of the “sākshi,” or eyewitness, has a special place in ancient India. In the Upanishads, the word means “pure awareness” and is equated with “atman,” the individual soul. The Śvetāśvatara Upanishad describes the ultimate being as “The one God hidden in all beings, all pervading, the inner self of all beings, the ordainer of all deeds, who dwells in all beings, the witness [sākshi], the knower, the only one, devoid of qualities.” I can’t help thinking that here, too, the women, who, like Vyasa, were eyewitnesses, possess an all-pervading vision.

If I have any complaint about Until the Lions, it is the brevity of the author’s notes. Naïr includes a family tree and a dramatis personae. But her eight short notes do not give enough background for a book so rooted in Indian soil and myth. As I read the novel, I had questions about the book’s structure (for example, the order in which Naïr introduces her characters), the characters (to what extent do they deviate from the epic?), and the poetic forms (which form was used for each poem, why, and how does it reflect or heighten the emotional content?).

But this is a minor criticism and has nothing to do with the work per se. Until the Lions is undoubtedly a tour de force. It is not an easy book, especially for those unfamiliar with the epic, but it is well worth the investment of time. Naïr’s poetry and poetic prose, seething with energy, has truly unleashed the lions, the long-suppressed female voices of India’s great epic. And make no mistake: these voices do roar.