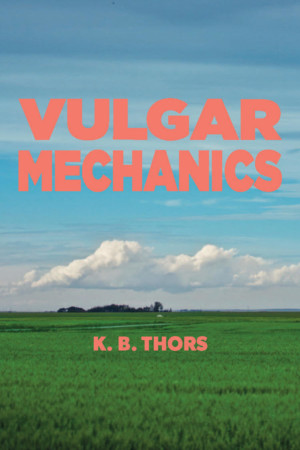 Before publishing Vulgar Mechanics, her first full-length collection of poetry, K. B. Thors won the American Scandinavian Foundation’s Leif and Inger Sjöberg Prize and was nominated for the PEN Literary Award for Literature in Translation for her translation of Stormwarning by Icelandic poet Kristín Svava Tómasdóttir. Thors’s translator’s ear is clearly attuned to the sounds of language, so it follows that her own poems are full of dense sonic playfulness. For instance, take these lines from the poem that opens the collection, “Girl Gives Birth to Thunder”:

so why
go out of your way

to carve cold-room
root cellars for another

Hard c sounds, pressed against the open vowels of “room/root,” aurally engage Thors’s intertwined themes of birth and the legacy of colonial violence in the prairies, embodied by the earthquakes caused by fracking. As this opening poem promises, the collection is densely layered both sonically and thematically. Geographically ranging from rural Alberta to New York City, Vulgar Mechanics explores the way bodies and language shape and inform each other, investigating misogyny and queer sexuality alongside environmental destruction and personal loss.

The opening section of the collection documents male violence and the way traumas are passed through generations, seen against the backdrop of a mother’s death. In “What’s with the Girls?” a suppressed familial history of rape emerges when a terminal cancer diagnosis impels the matriarch to bring the “unnamed normal” of molestation out into the open. “Comme des Garçons” observes that “Rape Culture is an imperative form. Ready to wear.” Here again Thors’s facility and playfulness with language is on full display, linking the linguistic construction of advertising phrases like “ready to wear” with the violence of a patriarchal culture.

Thors’s lines are often quite compressed, covering vast emotional territory with a remarkable economy of words. Take, for instance, the final lines of “What’s Love Got to Do with It,” a poem where the speaker begins by questioning the purpose of speaking at a funeral, but concludes with:

There’s a phrase that fits:
I don’t believe in either-or

but in hindsight
she could have been.

The poem leaps from the grief of a eulogy to the queer grief of hiding sexuality and desire, concluding with a simultaneous refusal of binaries and speculation about the sexuality of the recently deceased, gesturing toward the many possible futures that are interrupted by death.

The later sections of the book turn their attention more explicitly to queerness and bodies, exploring the range of implications contained within the “vulgar mechanics” of the title. “Mojo Rising” articulates how the seemingly mundane nature of physical existence can actually challenge the cultural status quo. It opens with the lines:

What happens to the cunt when the stomach corrodes

It becomes a will, equipped with its own rhetorical questions.

Bodies have wills and ask questions, pressing us toward answers we already know deep down. In a similar vein, “Champagne Problems” opens with this pointedly hilarious observation: “Twenty-first-century chivalry: hers and hers single dose / yeast infection treatments, capsules chased with pints.” Alongside her sly humor, Thors uses concrete physical details to explore the larger social and political dimensions of queerness, calling for “a variety of tongues in the tongue-in-cheek, / declaring ourselves and all our pre-existing conditions / worth a lick.” The density of these poems, cerebral and sonic, makes a fierce argument for multiplicity and inclusion. They also argue against straightforward categories of identity, which reduce and contain our full human potential.

What is most striking about the collection as a whole is Thors’s wide scope of analysis and willingness to trust that her readers will follow the leaps that she makes. Take the ending of the poem “Pulse,” which calls to mind the Florida nightclub shooting filtered through the metaphor of the ship of Theseus:

A sash full of powder strapped to your body,
bachelorette bedsore, caking the hull.
When ship becomes casket we gather at the shore
and burn that sucker down in bulletproof tea gowns.
Skin-tight leopard print, shrunk in the wash.

I’m struck, again, by the musicality of the internal rhymes: “bedsore/shore” and “down/gowns” adding sonic pleasure to the absurd and painful necessity of bulletproof leopard print dresses. This final image—a quest for fashionable and protective funeral attire—invokes a larger struggle to find some queer way of publicly mourning loss while keeping safe in a world full of homophobic violence.

This is an assured and confident first collection, demonstrating the creative possibilities that emerge when loss and anger are reckoned with head-on, and when our bodies and their desires are given permission to express themselves fully. Thors pays attention to the many “constellations / in our blind spots,” ultimately encouraging us to transform into a larger vision of our selves, to embrace a “bigger changeling bang.”