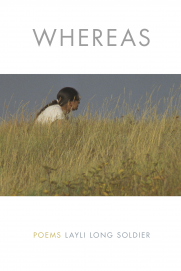 “Now / make room in the mouth,” writes Layli Long Soldier in her innovative and kaleidoscopic debut book of poems, Whereas. Setting a crucial motif with neither a title nor punctuation, the concluding line then commands, “for the grassesgrassesgrasses.” Long Soldier, an Oglala Lakota poet and 2016 Whiting awardee, offers a personal and reactionary take on indigenous American life in response to failed promises, obfuscatory legal speak, and the ever-present hauntings of American conquest. Whereas unfolds immediately as both literary text and necessary gesture toward the possibilities of language—especially as indigenous sovereignty and civil rights issues remain unnoticed in our contemporary American moment.

Yet the brilliance of Long Soldier’s poetry isn’t solely in the sheer dazzle of its imagery and narrative, but in her deployment of surgical precision, careful linguistic thought, and a staccato rhythm that carries with it a sustained musical abruption. In one of her first sequential poems, “Diction,” the speaker intuits:

As such, the poems are meticulous in heightening our awareness of how words begin in the body, how parts of our languages are written into the page, and later how meaning shifts between a reader’s prescribed assumptions and their ability to choose to digest substance. Throughout this first section of thin, scattered, spacious, right-aligned, or prose poem accounts, poems such as “Vaporative,” “Steady Summer,” and “Waȟpániča” deliver virtuosic meditations on language loss, landscape, and a fractured sense of longing. Along with these themes, we see Long Soldier use—among other tools—strikethroughs, bullet points, definitions, parentheticals, italics, slashes, gulfs of silence, and punctuation (or lack thereof). Her poems, in doing so, pull apart our understandings of sound and speech:

But what stands prominently at the end of Whereas’s first section—accurately titled “These Being the Concerns”—is her anti-creative piece, “38,” an almost metronomic historical telling of the events and aftermath of the Dakota 38, the mass hanging of 38 Dakota men. It is here in this conclusive space that “The sentence will be respected.” Here, the speaker prefaces, “I do not consider this a ‘creative piece.’” It is in this space, told point-blank, as the events unfold and Long Soldier intimately peels back the reasons and causes for the Dakota 38, that we are reminded, “Everything is in the language we use.” Everything from the treaties to legal trickery, from state-sanctioned execution to centuries of a people’s survival, how humans blur or break each other apart, can be found in the choices made inside language.

Whereas is most notably, and deservedly, a collection revered in the contemporary literary world for its direct responses to the U.S. government’s 2009 “Apology to Native Peoples,” an apology that went largely unnoticed. The second half of the book—which is divided into three parts: “(1) Whereas Statements,” “(2) Resolutions,” and “(3) Disclaimer”—pays careful attention to the Apology’s congressional language, to the emptied meanings and therefore the failures of its execution, and to the consequences such lightweight gestures have on actual bodies of indigenous peoples in this nation. Long Soldier’s deft cognizance allows her to reflect on the effects this official document has on her as a person:

And when the realities of living in this complicated space of sovereignties collide and linger in the psyche, the “Whereas Statements” shift seamlessly between learning forgiveness and realizing the long, almost impossible journey toward reparation. In another poem, Long Soldier aligns the visceral experience of this complicated relationship between indigenous peoples and the government at large by drawing on an experience at the Indian Health Services: “Yet at the root of reparation is repair. My tooth will not grow back ever. The root, gone.”

In Whereas, we are given a substantive act of intelligent, crafted resistance. Toward the end, we circle back to language and one of Long Soldier’s resonant questions: “—how do / I language a collision arrived at through separation?” Amid the detached and congressional, Long Soldier’s debut generously opens a doorway between the poetry of the personal and the poetry of protest. And what timing; as indigenous peoples are united in solidarity, praying together against continued conditions of violence, this book insists, “this is a ceremony.” And Long Soldier’s Whereas notably punctuates that urge: “act accordingly.”