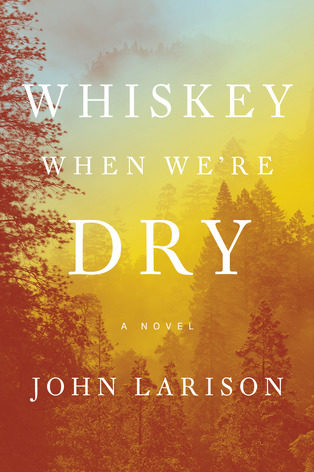 John Larison’s Whiskey When We’re Dry has all the classic elements of a Western saga: endlessly promising yet punishing land, tobacco and booze, corrupt lawmen and kindly prostitutes, good guys and bad guys with guns blazing. But it’s the particular story of our hero, Jesse, and her gender fluidity that makes this a truly excellent book.

It’s the 1880s, west of the Rockies, and seventeen-year-old Jessilyn Harney is in trouble. Her Mexican mother died giving birth to her, and her father, a traumatized Civil War veteran, struggles against ranch poverty, drought, and cattle rustlers, to raise her and her feisty brother, Noah. “Pa was a good soul, full of respect for the women in his life,” Jessilyn tells us, “which might be the straightest measure of a man.” Her valuations of men and women prove useful. She performs the traditional woman’s role at the homestead, but also surreptitiously studies her father’s shooting lessons with Noah, then fires the guns herself. “House duties was my calling, but there was something else growing in me too. For those hours I held the Colt I was more than me.” When her father dies and her brother runs off and becomes an outlaw, Jessilyn encounters scheming neighbors and a lecherous sheriff, and learns that the Wild West is no place for a teenage girl on her own. Cutting her hair, binding her chest, and pulling on Noah’s old clothes, she packs her guns and gallops off on a beloved mare, Ingrid, hoping to find her brother and bring him home.

Much of the brilliance of the novel rides on Larison’s first-person narration. Although educated on the barest biblical literacies and family yarns, Jesse’s narration is astute and philosophical, her lyrical loping voice soaked in territorial vernaculars and personal grit: “We heard nothing but for the falling snow and the hooves of our own hearts.”

Jesse deftly plays her role as a man, even when her biological gender is exposed by a sympathetic prostitute: “You ain’t the only man to pass through here who ain’t a man.” There are other women and men emotionally and sexually attracted to Jesse, and these scenes of intimacy, especially the bunkroom talks with Greenie, a closeted gay guardsman, are written beautifully. “I can’t never touch what I want. Do you know that trouble?” Greenie asks Jesse. “I know that trouble,” she empathizes.

The dynamics of loving and fighting enflame many Westerns, and perhaps in order to blast the old barriers of gender, sexuality, and to a lesser degree, race, Larison must reload the old American passion for guns. Jesse’s great skill is shooting—and betting matches earn big, especially among men with big egos. The shooting contests and duels are suspenseful, terrifying, authentic and well researched by an author who knows his weapons. Jesse earns the attention of the governor, who signs her into his guard. The big mission is to catch the infamous outlaw, Noah Harney. Jesse needs the work offered by the governor, but she feels blood is thicker than water, and she’s determined to go above the law and help her sibling.

The governor is a colorfully stereotyped wealthy and corrupt frontier magnet exploiting the land and its people. When he finds out that his daughter, engaged to a wealthy senator, is actually in love with his black servant, he has the man killed. The gala wedding of the governor’s daughter and the senator is overthrown, however, by Noah Harney and his gang. Jesse thrills to be reunited with her brother, and she soon meets gang member Annette, a tough, hard drinking, gun slinging cis woman who dresses as a man. Noah leads the gang to a mountain redoubt and its fledgling utopia. Jesse learns that her brother is a Butch Cassidy brand of hero, helping the common folks while fighting government and corporate corruption. He is also a feverishly charismatic John Brown-like  prophet with a cult following. The novel hovers a bit too long over this hideout citadel, and though it gives Jesse and Annette time to fall in love—their bathing scene is wonderful—the intensity of the earlier drama fades. Until the end, that is, when Jesse survives a deadly ambush to fight on—bloody Tarantino style—for freedom and justice.

Jesse adopts her male role out of necessity, but she comes to live it very comfortably. Do we know which gender she truly prefers? Does it matter? All we need to know is her humanity and courage—like those of Charley Parkhurst, whom Larison researched for this novel. Born Charlotte, Parkhurst ran away from an orphanage and lived as a man, becoming one of California’s most famous stagecoach drivers. Upon their death in 1879, it was revealed that Parkhurst was anatomically female. The San Francisco papers praised Parkhurst’s “nerve, courage, coolness and endurance, and the almost romantic personal bravery that enables one to fight one’s way through the ambush of an enemy.” Sounds like Jesse Harney.