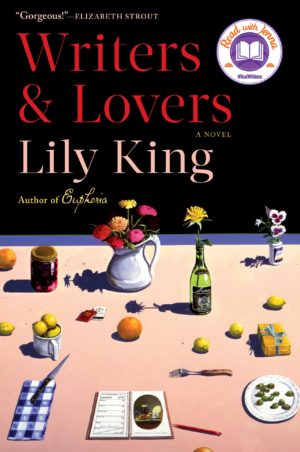 I read Lily King’s latest novel, a late coming-of-age story about a young woman who, as the title suggests, weaves and bobs through the emotional and psychological blows of writing and loving, in late January 2020. At the time, I had a lot on my plate, and the idea of one more assignment was not something I relished.

For a few dark, deep-winter mornings, I dutifully packed the slender book in my bag, pulling it out on my standing-room-only predawn commute into New York City. I balanced the paperback galley in one hand and my travel mug in the other, my reading arm looped around the pole for an optimal stance as the train jolted from Church Avenue to Parkside all the way up to Broadway-Lafayette or Grand Central.

As I read, the late-nineties world of Writers & Lovers—where women waited by the landline for their crushes to call them and manuscripts had to be typeset and mailed at the post office—was a welcome escape from my own. Things were simpler for the novel’s heroine, Casey Peabody, a thirty-something aspiring writer with the kind of baggage that would, in another novel, make her almost cliché. Her mother has died, her boyfriend has dumped her, and she is in love with two very different men: a widowed literary rock star with two precious little boys and one of the rock star’s students, a goofball who offers kisses that “melt your bones followed by ten days of silence followed by a fucking pat on the arm at the T stop.”

Casey tells us her story in a desperate first person that results in the kind of sentences one might scoff at in a book about writers: “I don’t write because I think I have something to say. I write because if I don’t, everything feels even worse.” We know, Casey, because all of us who have ever tried to write anything—an Instagram post or a novel—know that feeling. But in the context of the whole package, Casey’s story is anything but scoffable; her point of view, her struggles, and her ambitions come off as delightfully sincere. I often thought while reading, maybe I could write like this someday—in order to mollify the bad things that feel even worse when I don’t write—or that I could at least give myself the pleasure of dipping into more books that make me feel like this.

By the time I finally found time to sit down and write about Writers & Lovers, it was late March and for seventeen days (but who’s counting?), I, along with most of the world, had been filling the days with calls, classes, and meetings over Zoom and FaceTime, trying to stay connected with the people I might not see in real life for some time to come. There was more time for being alone with myself, as Casey is for most of the book, more time for writing, and more time for reading, especially books like this.

Now the nostalgic tug I felt while dipping in and out of King’s masterfully crafted sentences and this deeply human heroine’s mind was a balm for a different kind of wound. Instead of spiriting me away from the hustle of modern life, it was helping me feel connected on a more profound level to the vulnerabilities we all share: the desire to be seen, heard, touched; the desire to not be alone.

On the surface, there’s nothing exactly special about King’s fifth novel. Her last novel, Euphoria, was a dazzling take on the anthropologists Margaret Mead, Gregory Bateson, and Reo Fortune. The exotic setting and intriguing characters of that story were quite literally escapist. By contrast, there is a pedestrian quality to Writers & Lovers.

Motherless and boyfriendless Casey lives in a rundown basement apartment in Cambridge, Massachusetts. She can’t pay her bills or student loans with the money she earns waiting tables at a chichi Harvard Square restaurant and walking her landlord’s dog. If you passed her on the street, you probably wouldn’t even notice her; she’s  just another meandering youth. When she looks in the mirror, she thinks to herself,

I look beat up, like someone who has gotten ill and aged a decade in a few months. I look into my eyes, but they aren’t really mine, not the eyes I used to have. They’re the eyes of someone very tired and very sad, and once I see them I feel even sadder and then I see that sadness, that compassion, for the sadness in my eyes, and I see the water rising in them.

As she bikes along the Charles River on the way to the restaurant, Casey pauses in front of a flock of geese, thinking,

I love these geese. They make my chest tight and full and help me believe that things will be right again, and I will pass through this time as I have passed through other times, that the vast and threatening blank ahead of me is a mere specter, that life is lighter and more playful than I’m giving it credit for.

But for all this self-indulgent moping, it’s hard not to be on Casey’s side during this period of rotten luck in just about every life department. The meta qualities of this novel about writing are what redeem her, as well as the man-boys she alternately desires and repels. All three members of this love triangle are wordsmiths, each highly self-aware with a healthy dose of social awkwardness. Despite the many times I shouted, “Dump that jerk! You can do better,” both Silas and Oscar are endearing to a fault. Silas, the younger commitment-phobe, is just the kind of guy you’d (okay, I’d) swoon over in a college poetry seminar, with floppy hair and a floppy spine and dog-eared paperbacks of books stained with coffee. How romantic it is to sit with them over takeout food in the cool New England night.

All of Silas’s insecurity is compensated for by Oscar’s bravado. Although he’s another writer with a heart scarred by death, he’s logistically stable—house, kids, income, life experience. When he jokes with Casey about how their stroll through an arboretum has to be a date and not just a friendly get-together, we know he’s playing. The confidence underlying his every move—such as the formal invitation to dinner with the kids, where they eat things like mac ’n cheese and tell stories about their dead mother’s mean nurse—is alluring, even if he’s calculating the whole thing. When her landlord threatens to evict her after a few weeks of dating, he even invites her to live with him, and she considers it.

In a sense, Casey has the perfect setup. Her two beaux complement each other perfectly, and yet her inability to carry on with both is what makes her story exactly right. She realizes that her reliance on these men for a Jerry Maguire-esque “you complete me” feeling is unsustainable and undesirable. She has too much work to do alone before she can be a true and equal partner to anyone else.

But the most victorious moments of the book have little to do with the quasi-marriage plot. The pace quickens in the last third when Casey lands an enthusiastic young agent who sells her novel, she gets a job as a high school English teacher, and she’s cleared of a false-alarm cancer diagnosis. All these triumphs line up, one after the next, a few pages after she has given up pursuit of the man-boys. It’s an important shift in how she, and we, understand what being alone feels like.

Anyone who’s written anything knows the emptiness that comes from getting to the end. When Casey finishes her novel and tries to write something new, she tells us, “It’s bad and I stop after a few sentences.”

Even though I didn’t feel it at the time, I got into a rhythm with the old novel. I knew those characters and how to write them. I heard their voices and I saw their gestures and anything else feels fake and stiff. I ache for them, people I also once felt were stiff and fake, but who now seem like the only people I could ever write about.

Each time I’ve read Writers & Lovers—first in a world where I felt almost too connected and then one where I physically ached for the people I took for granted—I was reminded of the power stories have in keeping us together. It’s writing like King’s that makes these days and nights of solitude feel okay. We may be geese flying solo, but as Casey reflects in the final pages, “Some Canada geese may travel as far as Jalisco, Mexico.” Others “will stay where they are for the winter. They’re already home.”