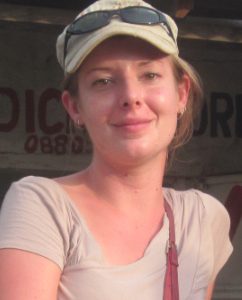 A War Across the River

In 2011, as a political crisis in Ivory Coast threatened to descend into war, hundreds of thousands of refugees were driven from their homes into neighboring Liberia, a small, sparsely populated West African nation that is one of the world’s poorest. In the remote border village of Butuo, an estimated 40,000 people flooded in almost overnight. This is the story of one night in Butuo, Liberia, in the spring of 2011.

It is still under the Liberian sky.

The village nightclub, a cement body topped in tin and white-and-blue UN plastic, is silent. The generator that roars for an hour or two on the evenings when there is fuel has been shut off. The crowd that gathers to charge phones and drink Coke under electric lights has melted away into the dark.

Night has overtaken this town. Whispering figures move in the dark, their paths traced by the weak bluish light of cellphones. There is no phone signal; the handsets are for this—lighting the blackness. The bush, the jungle, presses in from the sides, the rustles and chirps and hums growing louder as the night comes on.

And then, rat-tat-tat, boom, boom, from across the river. Ah, the war, they say.

A three-room guesthouse, “A-grade” spray-painted across the front, comes alive in times of crisis, when aid workers descend on the village. It was rented out this morning to the Red Cross, which has sent a woman from France. They are purifying water against the onset of typhoid, cholera, diarrhea, the running stomachs that occur when people are uprooted in the tens or hundreds of thousands.

There is nowhere else for a traveler to stay; indeed, few travelers ever find their way through the overgrown jungle tracks, over the dozens of broken bridges, to this place. But for the war across the river, there would be no reason.

Ma Annie agrees to house an overflow guest for an absurdly inflated price: ten dollars a night for a foamie under a dusty mosquito net.

The door doesn’t lock. Ma Annie says you buy your own padlock if you want one. Usually her son sleeps in this room. She calls him Isaiah. Everyone else calls him Bangladesh. They say he looks like the UN peacekeepers that patrol this part of the country. He does.

The people on the streets ask for money and dictate lists of items for the NGOs and the UN refugee agency to bring when they come. Rice, cassava, medicine, people say, tapping on your notepad. Nike sneakers, iPhone, Drogba jersey.

Out back, the tin-sheet washstall rises waist-high and is missing a side. Bangladesh heats water over a fire for your bath. Scores of children gather, giggling. He holds the cellphone flashlight so you can see, and so can they. A few steps away stands a long, narrow structure; inside, three shit-splattered holes, the three doors secured with small padlocks.

The news crackles on a radio hung high in a tree, the BBC World Service drifting in and out. A faraway London voice says it is a conflict over there across the river. The incumbent leader of Ivory Coast is defying the latest election result that says he lost, pushing the world’s top cocoa producer into a deadly downward spiral. They say on the news that hundreds have died; everyone here knows it is many more than that. The price of a chocolate bar might rise as sanctions bite into international supplies. The conflict in Ivory Coast, they say.

There is the crack, crack, boom in the quiet night. There are the soldiers guarding the bank across the river, smoking their cigarettes and waving, guns slung loosely across their backs. They are not the same soldiers that were here a month ago. These are rebels from the north who are coming for the ports, for Abidjan, for the presidential palace.

There is the stream of people crossing, with their stories of dogs eating the dead, children thrown shrieking down wells, soldiers prying apart the legs of women, girls, boys.

The Ivorians are flooding to this village. They come across with goats, motorcycles, baskets piled high on their heads, in a rowboat painted with the colors of the Ivorian flag—orange, white, and green. They are everywhere, emerging quietly from the bushes, digging small gardens in the jungle, sleeping in the houses, the churches, the schools, eating their way in a few short weeks through a village’s half-year supply of food.

And they’re shitting all over, says Ma Annie, who wears the key to her padlocked outhouse on a string around her neck. She sets a pot of rice and potato leaves on a small crate on her front stoop overlooking the rickety spread of market stalls where people now sleep.

When people go toilet like this, we all die, she says, digging her hands into the food and motioning for you to do the same. Those people got to go somewhere else. In the dark, her friends nod and murmur, uh-huh.

It wasn’t like this when the Ivorians first started coming. They were welcomed here in a country of people who know how fragile it is, how fast it can all change. People have been going back and forth across this river for as long as anyone can remember, tides of people pushed here and there by forces beyond their control. It was here, on Christmas Eve in 1989, that Charles Taylor and a ragtag rebel army invaded Liberia. Nearly fourteen years later, as Liberia’s war was finally ending, Ivory Coast’s was beginning.

Everyone here has been a refugee.

But the people keep coming and the food runs low and the UN SUVs bounce in and out, leaving little behind. They say they won’t feed refugees at the border, at this village, it’s too unsafe. It’s too hard to reach, those four or six or eight hours of mud and broken bridges. The refugees say they won’t go to the big camps being built sixty kilometers away, row upon row of stick structures wrapped in plastic on a dusty swath of red earth. They don’t want to go so far from their homes, their people. They don’t want to eat the food. Songs have been written of the horrors of bulgur wheat, that staple of a West African refugee’s diet, how it makes your stomach run. Bring rice and cassava to the camps, and we would go, they say.

Time passes, and twenty people in the house turns into fifty, and a week later it is ninety, and there is no food left and everyone is tired. Girls start turning up with tears in their eyes and blood on their skirts, cooking pots and shoes in doorways go missing in the night, the running stomachs spread, the angry voices rise. Everyone gets tired of waiting.

Muffled sounds crack through the night. The rat-tat-tat is an AK-47, say the villagers. That boom, it’s a mortar shell—the men debate the caliber. A couple of nights ago, you could sit on the riverbank and watch war light the night sky like the Fourth of July. African fireworks, says a man with a grin.

What news of the war, ask the villagers who come quietly upon Ma Annie’s stoop under the crackle of the BBC. It’s moving further south.

And still they come in the morning.