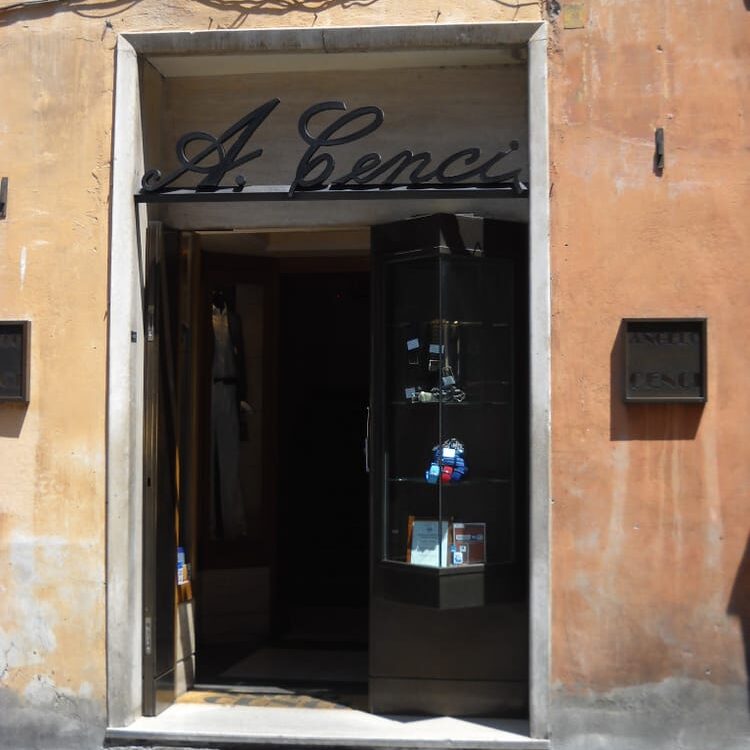 Beside the massive curve of the Pantheon, in a row of shops on the ground floor of houses already identifiable in Piranesi’s eighteenth-century engravings of the Piazza della Rotonda, is the small show window of A. Cenci, purveyor of menswear. Following the advice of a Roman friend, we’d come here to buy a shirt suitable for a forthcoming event.

The shop was tiny, but the possibilities for a plain white or blue dress shirt were extensive; when we finally made our selection, my traveling companion was led up a narrow staircase to try it on. It seemed to be just the right thing, although the sleeves were too long. In this establishment, shirts are not sized by neck and sleeve. Once a man’s neck is measured and a shirt to match it selected, the sleeves are customized to the correct length. It seemed the tailor could have it ready by the time we needed it, and a slip was made out by hand. This graceful personal service was being offered by the third generation of Cenci haberdashers in this very minimal but in effect capacious space. Like the Pantheon just outside, it endured—impervious, adjusting to the traffic of time.

Two days later, having collected the now perfectly adjusted shirt, we idled in a nearby street, eventually selecting a necktie in an even smaller shop entirely devoted to this sartorial need. Aimless now, we came to San Luigi dei Francesi (since the sixteenth century the national church of France in Rome) to stand in its dimness with a cluster of others beside the Contarelli family chapel, looking toward Caravaggio’s wonderful paintings of St. Matthew.

On this day, the illumination system was broken; no matter how many people inserted their hopeful coins, the saint remained an almost invisible presence, the vague light catching the white swirl of the little angel above him, his book, the wispy stroke of his pen. In the painting over the altar St. Matthew has given up wearing a shirt, but in the scenes showing the start and ending of his calling that is not the case. In the first, the dramatic lighting catches the richly elaborate sleeves of the well-dressed tax collector and his companions, as Christ singles him out, one hand reaching from his own simpler sleeve. Then, in the dreadful melee of Matthew’s murder, the saint reaches a white-robed arm to ward off the naked force of his killer. What workshop, what tailor produced those garments, their beautifully crafted fabrics measured to the painted arms by the artist’s skillful brush?

Also in this church is a chapel dedicated to Saint Cecilia, with frescoes painted by Domenichino. In one dramatic scene, Cecilia from a balcony is giving away all her clothing; servants are hauling toward her a trunk from which to scatter her things. Below her, the poor reach out for the secondhand threads. In one corner a child is trying on a hat; another is struggling into a sort of cassock that is clearly way too big. Just beneath Cecilia’s balcony a boy is lifted on another’s shoulder to reach for the largesse dangling over the extended hands. In the lower right two children struggle over a garment, and a mother lifts a warning hand. The scene of benevolence to beggars is uncomfortable to contemplate—the avidity of the unclothed, no matter the length of the sleeves.

In the evening my traveling companion put on the new shirt and tie and I zipped up a dress made of wrinkle-proof material and we rode up to the roof garden of the old Hotel Minerva. Once the residence of envoys from foreign legations, it is now just a modern hotel. The sun was slowly going down and people were drinking prosecco and standing about more or less attentively listening to a college president. When he was done, the soundtrack was picked up by a small group of musicians and I watched the light slowly lowering over the rooftops. Quite nearby was a very curious steeple, a spiraling shape beneath an orb with a cross on top. Strange and spiky, contorted and alive, twisting skyward—it was the top of the church of Sant’Ivo, the marvelous witty culmination of Borromini’s design for the church in the courtyard of the University of Rome. It sits above a dome that opens like a six-petaled flower beneath a lantern with slender columns between the windows. But all I could see this evening was the exuberant and anomalous spikiness of it, against the descending sun’s last bit of fire.

As the air cooled, birds dipped and soared around the roofs and domes, and looking down from the terrace I could make out Bernini’s whimsical little obelisk-bearing elephant in front of Santa Maria sopra Minerva far below, and the façade of the church wrapped in construction hoarding. And yes, that enormous dome just opposite really was the Pantheon against the evening sky. It was impossible to make out what anyone down below was wearing, but close by was a friendly monk from Central America dressed in a long brown habit, the collar of a sporty checked shirt beneath it barely visible at the neck. Also a relieved and exhausted man from the American mission to the Vatican who’d had the unfortunate task of making sure everything went smoothly during a recent brief and pointless visit by the American president. In our own simple attire we fed briefly at this farrago of Rome’s international life.

When we left it was quite dark. We walked to the Pantheon and into its portico, where a small group was being shown by lantern light the exterior architecture and the now-closed bronze doors. On the other side of the vast Roman rotundity the shop windows were dark, the haberdashery invisible, but there were still people clustered around the fountain in Piazza della Rotonda, and a gelateria on this side of the ancient pagan building was brightly lit. We sat on a low brick wall just beside it, spooning in the sweet, so cold and delicious, in the spring night.

Whenever I look at images of the Pantheon and the generous public spaces around it, I now always look to see if there’s a glimpse of the Cenci shop’s location. In the 1751 engraving by Piranesi you can see quite clearly the row of houses on the narrow street that begins at the piazza. They are there also in a later painting by Bernardo Bellotto, and again in less capacious views offered by recent visitors online. Invisible landmark just peripheral to the famous monument, it’s a simple alteration in my looking that customizes the fabric of the city, a small private joke beside the nobility of the famous monument, a lingering fragment in time. This is how we came to be lingering ourselves on an evening almost three years later by the same shop window—now, in this late winter month, advertising sconti, discounts.

We had just absorbed once again the Pantheon’s graceful and indifferent geometry, the perfect small round opening where heaven’s steady motion persists above the tumult of Baroque Christianity, Renaissance anxiety, above the dramas of sainthood and martyrdom, of wealth and poverty, above our fleeting present just here, just now. Unhurriedly we examined the deliberate display of menswear and accessories in the window and moved on in the dusk, headed toward the river. But as we entered Piazza Minerva (the little elephant obelisk, the hotel entrance, the shallow steps up to the church), my traveling companion came to a halt and said he really needed a new belt; immediately we turned to retrace our steps and to enter once more the tiny shop.

The obliging Cenci scion pulled out a drawer and produced exactly the right belt (not of course the one in the window, nor included in the seasonal sconti), and this classic bit of haberdashery was carefully wrapped. Now it seemed another steady trajectory across time had been acknowledged. We had touched our own orbit here, our own brief crossing in this pocket of the city’s eternity: Caravaggio’s lavish talent, the ragged turbulence of Domenichino’s poor, the soft blue shirt with its correctly measured sleeves, and a vanished spring night: the incidental music of a Roman evening, and the dome of the Pantheon almost close enough to touch in the sundown sky.