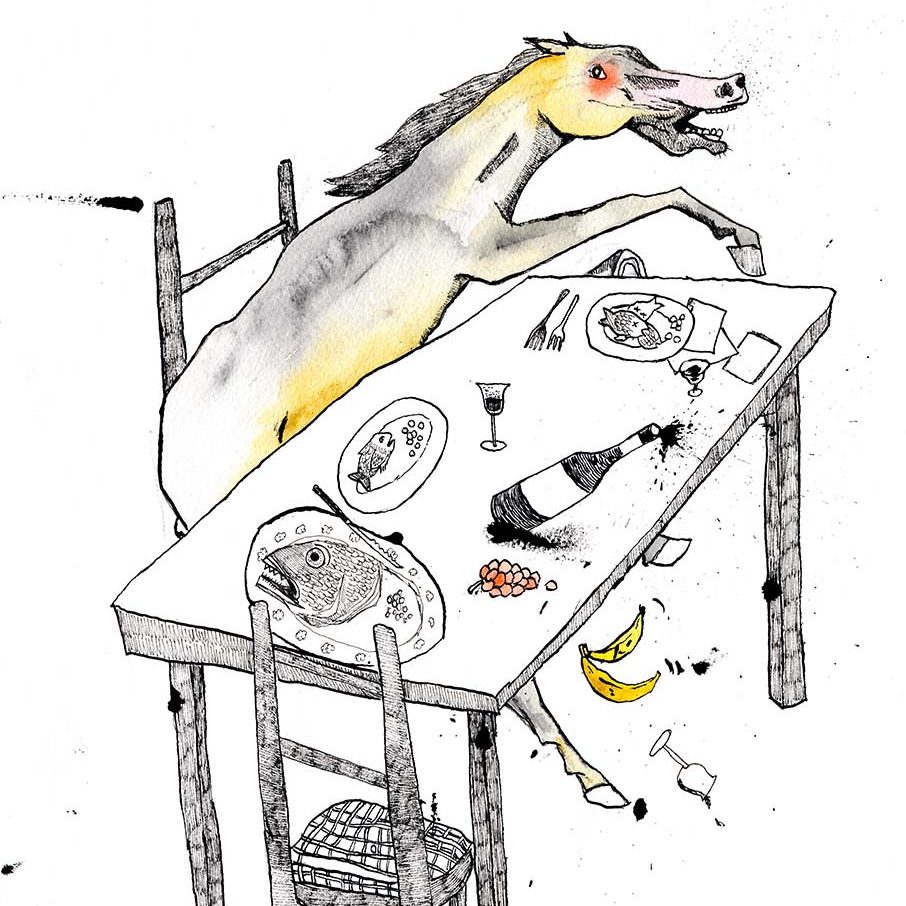 Illustration by Bianca Stone for Antigonick

I first read Antigonick shortly after it was published seven years ago, in May 2012, halfway through the Obama administration. I was startled then by the harrowing dystopia Anne Carson had conjured to depict ancient Greece; how at odds it seemed with our twenty-first-century America, how removed.

This past June, when E. Jean Carroll’s allegations that she had been sexually assaulted by Donald Trump were made public, I pulled Antigonick off the shelf. I needed to revisit Anne Carson’s translation of Sophokles’s The Antigone, a masterpiece about tyranny, resistance, and a woman’s act of civil disobedience.

The Antigone was first written and performed in 442 BCE, near the apex of the Golden Age of Athens. Antigone, daughter of Oedipus, defies an edict issued by the new king, her uncle Kreon, that forbids the proper burial of her brother, Polyneikes, who was just killed in battle. Declared an enemy of the state, he is left to rot on the hill outside Thebes. In the opening scene of the play, Antigone tells her sister Ismene she intends to bury their brother. Ismene refuses to help her, fearful of the consequences of acting against Kreon’s new law. When Antigone is caught pouring dust and water on her brother’s body, she is brought before the king. In Sophokles’s version (as per the 1939 translation by Dudley Fitts and Robert Fitzgerald), Antigone is respectful in her speech, willing to argue her case. And initially Kreon interacts with her as a family member, not a threat, just a wayward girl acting out of turn. He describes how he will break her will as one would break a wild horse.

But Carson’s Antigonick has a subversive and distinctly modern torque that now seems prescient, redrawing the vectors of conflict of Sophokles’s play:

Guard: got her
Kreon [to Antigone]: and you with your head down, you’re the one
Antigone: Bingo
Kreon [to Antigone]: you knew it was against the law
Antigone: well if you call that law
Kreon: I do
Antigone: Zeus does not
Justice does not
the dead do not
what they call law did not begin today or yesterday
when they say law they do not mean a statute of
today or yesterday
they mean the unwritten unfailing eternal ordinances
of the gods
that no human being can ever outrun

In Carson’s version, Kreon does not invoke the wild horse metaphor; there is no lengthy commentary on what Antigone, as a woman and a prisoner, has to learn. Violence is violence, and it is not romanticized.

Kreon: you think you are iron but I can bend you
I’m the man here
Antigone: yes you are
Kreon: I’ll bend your sister too
Antigone: can we just get this over with

Carson’s protagonist is more audacious and irreverent than her Sophoklean predecessor, defiant to the point of seeming mad. Even her beloved sister Ismene remarks, “You are a person in love with the impossible … although you go without your mind.” Ismene herself is, in some sense, a soldier for the status quo, preferring to support a corrupt government than defend her own rights. “Don’t cross the line,” she begs Antigone. “Girls cannot force their way against men … you aim too high.”

It is, however, precisely Antigone’s single-minded reach—her fierce tenacity and vision, her bold ideal of what law is and what it’s meant to be—that gives Carson’s version its haunting contemporary relevance. Her Antigone is up against a ruler who is not only blundering and brutal but misogynistic and crass. He is not a leader, but a “terribly quiet customer” drunk on power and making a muddle of things. His “words of the day” are “legislate” and “capitalize.” His “favorite noun is Mine.” He “rows around” about in a luxe powerboat, his “ship of state.” But Antigone is wise to the kind she’s dealing with. She does not plead or defend her case. Nor does she try to reason with someone whose reactive assaults have no rationale. She knows Kreon will not adjust. She meets his autocracy with insolence, as if to say: this breed of extremism can only be met with extremes. Not war. Not military force or weaponry. But language and raw will. A woman who will not give an inch.

There is a bizarre, almost frenetic disarray throughout Antigonick, a chilling sense of how easily democracy can slip to tyranny when citizens are paralyzed into silence and inaction. Kreon’s executive orders have bred a heightened sense of panic among his guards, and the chorus of old men in Carson’s Thebes reflects the protean chaos of a government that has lost its moral ground. Out of that disorder breaks the singular, driving rage of Antigone’s unflinching conviction.

Her position is as unyielding—as unilateral—as the gross abuse of power she stands against. Kreon tries to isolate her mentally, to gaslight her: “You’re the only one in Thebes who sees things this way.” But Antigone evenly counters: “Actually no they all think like me / but you’ve nailed their tongues to the floor.”

Antigonick, which was published by New Directions, has little punctuation, and the pages are unnumbered. Meant to be inhaled in one sitting, Carson’s version has a radical minimalism, a thrilling strangeness, in design as well as content. Hand-inked text blocks—at times just one sentence set like a horizon on the page—are overlaid with vellum transparencies of artist Bianca Stone’s abstract illustrations.

Less translation than reinvention, Antigonick is also a deft work of scholarship, strung through with allusions to earlier interpreters of Sophokles’s tragedy, from Bertolt Brecht (who had his Antigone perform the entire play with a door strapped to her back) to the French dramatist Jean Anouilh, who rewrote the script in such a way that it opened in Paris in 1944, creating a version that was at once palatable to the Nazis in the audience and an unswerving symbol of the French Resistance.

Over the centuries, Antigone herself has been transformed from a classically tragic female figure of daughter and doomed victim into an icon of feminist insurgency. While male theorists such as Hegel, Kierkegaard, and Lacan have emphasized Antigone’s “unconscious ethics” (incidental to her concern for kinship), modern philosophers Luce Irigaray and Judith Butler hold up her civil disobedience as a fully conscious, intentional act.

Carson pushes these feminist readings further. Her Antigone is not theoretical, but living, meant to be enacted. By stripping the tragedy to its bones and paring back all extraneous bits of polite and politic discourse, she foregrounds the central conflict: a woman’s strategic resistance against a tyrannical state. Over the course of the play, it becomes increasingly apparent that it is precisely Antigone’s gender and her web of relationships that will effect the sociocultural change needed to upend Kreon’s rule. Her testament that “I am born for love not hatred” is a response to his “Enemy is always enemy, alive or dead.”

Kreon condemns her to be buried alive. Resolute, with no equivocation, she hurls toward martyrdom, which makes her, curiously, less martyr and more fury. Her radical defiance is an exhortation to engage.

As it goes in every tragedy, death gives rise to death. First Antigone dies, then her fiancé, Haimon, Kreon’s son, commits suicide to protest her murder. He is followed shortly by his mother Eurydike, Kreon’s wife. Yet even in this airless grieving ruin, Carson gives breath to what is possible:

Then you notice the soles are on fire

It is clear that Carson gambles on the fire. Out of Sophokles’ timeless work, she has crafted a taut, weirdly prescient reinvention. Her Antigone’s ferocity is not so much allegory as a call for the individual to rise up against absolutism and speak her truth. As the blind seer Teiresias warns: “Watch out Kreon / Watch out I see the future plunging toward you.”

At the close of Sophokles’s Antigone, Kreon gains what every autocratic ruler lacks: regret and a piercing awareness of what he has failed to see and thus destroyed. When Sophokles’s Kreon loses his beloved son and his wife, his pride finally crumbles, and he recognizes it was his “own blind heart” that caused their deaths. “I was the fool, not you,” he cries out, addressing his dead son, “to trample out the thing I held most dear.” As those who witness his outpouring of grief—chorus, readers, audience—we are moved. We feel compassion because we grasp the profound, extended weight of his remorse.

There is not the same catharsis at the close of Antigonick. Carson’s tyrant does not evoke a clear-cut sympathy. He has been such a boorish strongman—sexist, brutal, rash—and his final realization comes so hard and fast that it feels less earned. There’s a sense of things being wrapped up, a kind of childishness in his seesaw of words: “Late to learn O yes I am/late too late O then O then …” He blames the chorus for bringing him the awful news. He blames “an unbearable fate [that] has loaded itself onto my head.” He does not seem to hold himself fully accountable for the vast devastation his actions have unleashed, the human cost of his unjust wield of power. Rather, he abdicates, shifting into third person: “Take Kreon away/he no more exists than someone who does not exist.”

Loss, remorse, revelation—and the transformation they engender—take time. Carson does not give us that time. She does not allow us the cleansing outpour of emotion that, in classic tragedy, results in restoration and a way forward. Rather, she reminds us that the imperative is to refuse to turn away from the suffering exacted by oppression and injustice, to bear witness and hold up the words of those who have been silenced.

In her translator’s note to the second edition, Carson writes:

Antigone, you do not … aspire to a condition of silence
you want us to listen to the sound of what happens
when everything normal
musical
careful
conventional or pious
is taken away … dear Antigone
I take it as the task of the translator
to forbid that you should ever lose your screams.

The threat of tyranny is not just its destabilizing impact on the present. Tyrants come and go. The more pervasive and permanent threat involves the precedents set by an autocratic culture, the lack of tolerance and respect for human rights and civil discourse that imperils the future of a free republic.

Carson twists the end of the play with an invented character, Nick, who never speaks but is always on stage, measuring. His only stage direction is, “He measures things.”

The last words of Antigonick belong to the chorus: “Wisdom: better get some / even too late.” And everyone exits, apart from Nick. By leaving us with Nick, still measuring, Carson inverts the traditional Sophoklean notion that it is better to learn, as Kreon does, even too late. Instead, we have the inescapable sense that too late is, in fact, exactly that. All we have is the nick of time—the gap before too late—and that nick is now.