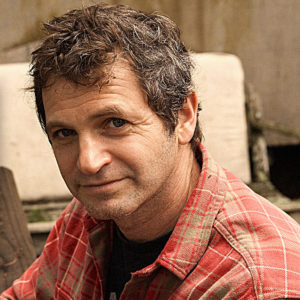 Spring semester, sophomore year, I moved out of the dorm and into an apartment on South Forest with Eliot Birnbaum. I hadn’t known him very long. I envied the books he read. He was an English major who refused out of principle to read a single assigned text. I’m going to let these clods choose my books? On his own, he’d read Ulysses twice and now read only work in translation. It was Eliot who urged me to read Sartre’s essay on masturbation in order to liberate myself from the tyranny of sorority girls. And it was Eliot who told me to copy. To take a great piece of work, and write it out, word for word, in my own hand. Thereby, Eliot said, I might dupe my brain into the fantasy that creating such a work was, physically at least, within the realm of the possible. He said, of course, the idea took, as its point of departure, Borges’s “Pierre Menard.”

I’ve got no idea where Eliot Birnbaum is today, or honestly if he’s alive. I’ve tried the usual ways to find him. If he’s out there he’s not making himself known to people who used to know him. Even back then he mostly wanted to be left alone. About a month after I moved in, Eliot holed himself up in his room for two weeks with Finnegans Wake. He’d surface, book in hand, only to go to the bathroom, or slurp cereal, or open a can of corn, pour it into a bowl, add some butter, and shove it in the microwave. Then he’d disappear back into his room. A week in, I knocked on his door and said Finnegans Wake isn’t a translation.

Through the door, Eliot answered, “You think rendering sleep into English isn’t translation?”

“Even Borges called it obtuse and totally unreadable.”

One afternoon when I came home from classes, Eliot accused me, with cause, of eating his Raisin Bran.

He was a small, muscular guy with curly black hair, and long, also curly eyelashes. Lurking under the lashes, two unblinking, bloodshot eyes. In another era he might have been one of those matinee idols with a serious, pouty look. Smart girls, especially, threw themselves at Eliot.

Another night, when I came home late, he said I’d used his mouthwash, that I’d sucked his Scope straight out of the bottle, which was also factually true.

No, I hadn’t known him very long, but in the little time I had, he hadn’t been greedy about his stuff. In fact, in the beginning, he often gave me things, and not just books. He gave me a new backpack because he didn’t like the color. He gave me quaaludes. He gave me a weightlifting belt. I’d heard that he was rich, that his maternal grandfather had founded Wieboldt’s, a defunct department store everybody, for some reason, remembers. He let me drive his Saab whenever I wanted to, which was often. He was the kind of new friend who suddenly trusts you right away on a hunch. I didn’t deserve it, obviously, but I was happy to take his stuff and drive his car. And his apartment beat the dorm.

“Seriously, what kind of person uses someone else’s mouthwash?”

There was more to it than that he was merely mad (and he was definitely mad), he was also completely incredulous. He’d thought I was one person and now here I was being somebody else. The sort of person who’d swig someone else’s mouthwash right out of the bottle. And yet at the same time, the whole thing seemed to go beyond me, as if Eliot was staring in disbelief not only at an intoxicated roommate, but at an entire human race capable of such atrocities.

That’s when Eliot smiled at me, his normal smile when he hid his teeth, and bowed in my direction. Not knowing what else to do, I bowed back.

I didn’t sleep much that night. Eventually, I got up and crept to his door. His light was on, Eliot’s light was always on.

“I’ll replace the Scope, all right? I’ll run over to CVS right now. Okay? You need anything else? Pack of condoms? Detergent?”

In my screwball memory, which as always, is egged on by a vague sense of guilt, as well as mournful impatience to get to the sad crux of any story, it happened directly after the mouthwash incident. But it had to have been at least a few weeks, maybe a month after, because I remember that, at last, Ann Arbor was getting warmer. Girls had finally begun to emerge from the cocoons of their thick coats. And during those weeks, Eliot and I must have existed in the loud and unique silence that is shared only by people who live together but are no longer speaking. When every door closing, every pot lid clattering, every ping of the microwave is amplified deep in your skull. I can’t quite remember. I just know that the days must have passed. And in those weeks, we must have slept, ate, and sometimes gone to class, or at least I did.

So it had to have been into May when Eliot swallowed a bottle of pills and had to have his stomach pumped. He checked himself into the hospital. He never told me one way or the other, but he must have changed his mind. Some vision caught his sleepy eyes before it was too late?

By the time I went to see him they’d already moved him upstairs from the ER and into a regular room. He looked older, more distinguished, even more brilliant because he hadn’t shaved in days. He was sitting in one of the two visitors’ chairs and had his feet on the other one. His bed was made. He wasn’t reading. He didn’t take his feet off the other chair when he saw me.

“You must be really tired,” I said.

I stood there. The only available place was the bed and sitting on it didn’t feel right.

I lived in Eliot’s apartment until after finals. I remember now that our building had a name, Rockwell Gardens. The words were chiseled above the front doorway arch. A touch of grandeur for a place that had no grandeur left. Before they chopped it up into student apartments, it must have been a desirable address. It was partially hidden by straggles of ivy and reminded me of The House of Usher. Poe’s story was one of the ones I’d copied out by hand. Most houses and apartment buildings don’t, as a result of the weight of their own stories, implode into incestuous dust. Poe’s do, bless that drunk lunatic. No, most buildings, unless somebody comes along with a crane, just sit there. For decades, no matter what happens or doesn’t happen inside, they just sit there. Drive by Rockwell Gardens today and it will still be there on South Forest in Ann Arbor, students rushing in, students rushing out.

And there will still be a garden out back. When I lived there the garden was overgrown but retained some of its old beauty. There were once carefully manicured shrubs, still holding their shape, and the remnants of a stone walkway beneath the dirt. And I remember there was also a defunct fountain with a little boy standing in the middle. That he was aiming his little wiener at the pond actually seemed natural. Water must have flowed through it into the pond back in the day. A sculptor with a sense of humor or a creep, who knows? The garden was separated by an alley from the sorority parking lot, and when the weather was good, after Eliot left, I sat out there with my fellow penis-holder and half-studied for exams, half-listened to the Tri-Delt girls as they laughed and got into and out of their cars. The laughter of spring and warmth and newly bared legs. Was is it about sorority girls and laughing? Who told them the world is such a party?

© 2019 Peter Orner. Excerpted from Maggie Brown & Others by Peter Orner, scheduled to be published by Little, Brown on July 2, 2019.