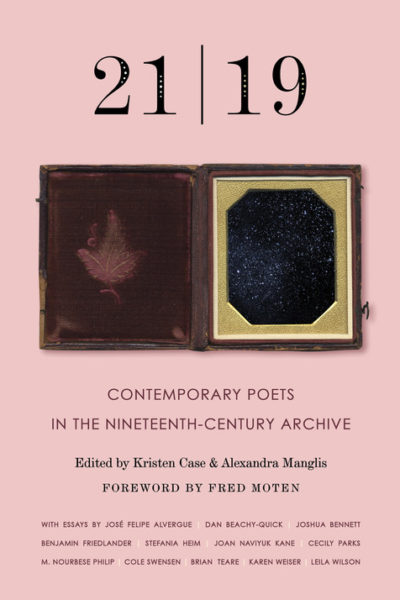 In 21 | 19, a dozen contemporary poets offer essays of varying length and purpose, engaging nineteenth-century predecessors in imaginative and scholarly ways. The authors frequently reference social and broader cultural issues, as our contemporary moment demands. But they also do justice to the aesthetic means and contexts of their predecessors, displaying a sophisticated sense of poetics as well as a good grasp of history and its implications for the present moment. Alexandra Manglis, who is a cofounder of the experimental magazine Wave Composition, and Kristen Case, a widely published scholar and poet, have done a remarkable job of bringing together such a challenging collection.

Reading these essays was a pleasure, but I almost didn’t get to them because I was puzzled by the foreword, by Fred Moten, which contains some of the most bizarre sentences I’ve read since the death of Derrida. I cannot begin to guess what this passage means:

This anthology—and not just insofar as it is an anthology, bears a double orchestral simplicity—asymptotic, intra-active, not falling together, and cutting together-apart, to get here, like Suné Woods and Karen Barad, which is Karen Barad in Suné Woods, almost.

For a moment I thought I had grasped it, but then came that discouraging “almost.” However, having crept on all fours through the foreword, I reached the more lucid and helpful introduction by the editors. It clearly lays out the premises and procedures of each essay that follows, and serves, as an introduction should, as a sound guide to the book as a whole. The basic question asked is this: in a nation of conflicting political and social imaginations, what use can we make of our nineteenth-century national literature? The answer seems to be that such literature can productively complicate our work, lives, and thinking. Within this broad framework, each writer strikes an individual pose. But without obvious derivation, each of these essays owes something to the innovative criticism of Charles Olson, Susan Howe, Susan Stewart, and Anne Carson—all of whom, rejecting the orderly academic model, have written capacious, flexible, and personal essays that owe more to Emerson than to T. S. Eliot.

One of the most interesting essays is M. NourbeSe Philip’s “Making Black Cake in Combustible Spaces.” Picking up on Emily Dickinson’s recipe for black cake and the status of black cake in Caribbean culture, Philip uses the work of scholar Aíf Murray to argue that Dickinson adopted linguistic strategies from the vernacular speech of household servants. The Dickinsons probably also spoke demotic English among themselves, but the suggestion remains an intriguing one. Philip’s originality is in locating in the recipe itself, with its blackening of sugar and the bitterness of its burning, the same deformative that we find in Dickinson’s colloquial voice, as well as in in the oppressive colonialism that contributed to New England’s nineteenth-century prosperity. A poetics of food can be both aesthetically insightful and socially revealing.

Another intriguing essay is Joshua Bennett’s “Revising The Waste Land,” which juxtaposes Kea Tawana’s somewhat famous Ark, built in Newark during the 1980s from scrap found around the city, with James Monroe Whitfield’s poem “The Misanthropist” (c. 1853). Both, Bennett argues, are expressions of black apocalyptic thinking in the face of cultural, linguistic, and social obduracy. He then turns to the contemporary poet Phillip B. Williams as a fresh attempt to find a language adequate to the dichotomies of “enslavement and freedom, confinement and mobility, beast and overseer.” In Williams’s poem “Mastery,” with its inversion of black/white and its dark/light binaries, Bennett sees an attempt to reconcile the received European poetic tradition with the perspective of the black writer. Through a poetics that refutes the notion of racial supremacy, Williams’s poem, Bennett argues, offers to return us to the earthy matter of which we’re made. A comforting, if challenging, vision.

Cecily Parks’s atmospheric “Night and Light in Nineteenth Century American Poetics” also particularly engaged me. She points out the importance of the dark to Dickinson (who worked her garden at night) and Thoreau (whose moonlit wanderings are famous) and develops a notion of “night poetics” as an available aesthetic mode that, with electric illumination and the destruction of the natural world, seems about to disappear into the Anthropocene. Living in the woods, far from the nearest streetlamp, I realized in reading this essay that I’ve failed to appreciate the relatively deep dark still available here. To that extent, the nineteenth century retains a presence in rural New Hampshire that I hadn’t perceived.

A few of these essays are aggressively unconventional in form. Stefania Helm discusses Whitman in a fragmented unfolding that resembles Whitman’s autobiographical Specimen Days, while Joan Naviyuk Kane’s account of her reading of Moby-Dick appropriates the titles of the novel’s early chapters (“Etymology,” “Loomings,” and “Extracts”) as sectional headings. Despite their open forms, both essays cohere nicely. Every essay in this collection has something to recommend it, and every reader will find a favorite. Despite occasional lapses into critical jargon, this compilation offers solid aesthetic insights (often rooted in sociocultural concerns) into some of our most familiar authors, as well as highlighting authors who are less famous but well worth our attention. In recommending this book to anyone seriously interested in nineteenth-century American literature, I am not even going to advise (despite my critique) skipping the foreword. After the difficult and frustrating first page it does have something to say, after all.