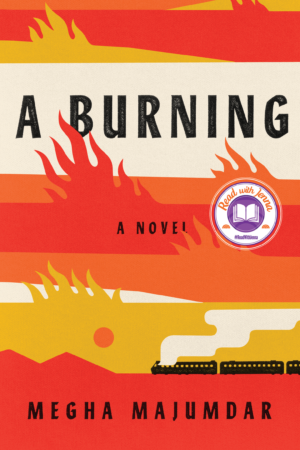 Megha Majumdar’s debut novel A Burning took the literary world by storm; you’d be hard pressed to find an outlet that didn’t name it as one of the hottest books of the summer. It has many of the characteristics that make literary fiction popular: it is highly political, eschews grammatical norms, and is made to be consumed in a single sitting. But what truly makes A Burning stand out are the ways in which the story of a young girl in Kolkata, India, holds a mirror to the current political situation in the United States.

A Burning follows three characters in the aftermath of a terrorist attack at a railroad station in a Kolkata slum. Jivan is accused of aiding the terrorists, when really her only crimes are writing anti-government Facebook posts and being in the wrong place at the wrong time. The other two perspectives come from Jivan’s former physical education teacher, PT Sir, and Lovely, an aspiring actress who is a hijra (a South Asian gender identity known for spiritual practice and feminine self-presentation). All three characters must contend with the aftermath of Jivan’s imprisonment and navigate the tricky landscape of national politics and the mob mentality created by social media coverage of the event.

Majumdar expertly distinguishes these three characters by giving each a distinct voice. The most pronounced is Lovely’s: she is full of optimism as she dreams of becoming a movie star, and all of her sections are written in the present progressive: “Today, I am standing up and joining my hands. I am bowing.” This is Lovely recounting her first experience of acting in front of an audience, in the doorway of her acting teacher’s house. At first, I found this speech pattern jarring, but I quickly fell into its rhythm. Lovely’s chapters add a breath of fresh air. She encounters plenty of misogyny and troubles in her own right but refuses to lose her cheery disposition.

Unfortunately, Lovely’s voice is the only bright patch in the entire novel. Jivan’s situation goes from bad to worse as it becomes clear that she has become the government’s scapegoat. PT Sir and Lovely must decide whether to speak up in her favor. Both try to do the right thing and vouch for Jivan at the trial, but once they become successful, they quickly throw Jivan under the bus.

The novel’s purpose is to highlight the ways underprivileged groups are incentivized to fight amongst themselves. PT Sir falsely testifies in criminal cases against his party’s political enemies in order to supplement his teacher’s salary. Lovely must turn her back on Jivan to ensure that directors will cast her in their movies. Jivan takes the blame for the government’s inability to catch the terrorists, and the public believes that she is guilty thanks to a few anti-government Facebook posts.

In a recent NPR interview, Majumdar declared that “the parallels between India and the U.S. are stunning.” In the US, the novel’s June release date coincided with the Black Lives Matter protests and the social media movement that accompanied it. A Burning is filled with governmental violence and failings, as well as the power that social media and media outlets can have on the political process. The resemblance is eerie.

In fact, after a while the novel begins to feel a bit one note. Every moment seems designed to serve the same end: to show how corrupt the system is. The story leaves scant room for disagreement with its message, and the ending doesn’t inspire hope. PT Sir and Lovely stop fighting to free Jivan in order to hold onto their own unbelievable power and success. Both characters get the happy ending of their wildest dreams, whereas Jivan is put to death as a terrorist. A Burning presents a problem, again and again, but offers little hope and no solutions.