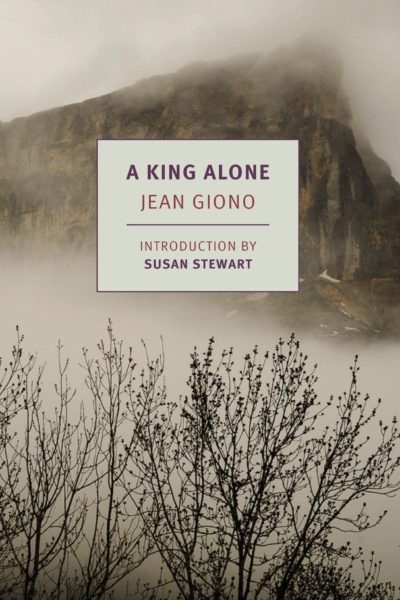 Published in French in 1947, A King Alone marked the start of a strange new period in the artistic output of the French writer Jean Giono. A published author for nearly two decades, Giono imbued his previous work with an almost pagan naturalism devised from the bounty of his native Provence. Coupled with his ardent pacifism, this emphasis on the lushness of the natural world created a baseline optimism in his early works that can sometimes feel antediluvian. His later postwar works function as palinodes of a sort, retracting the sunny faith of his early novels and substituting for it a practiced pessimism. But Giono never really abandoned his prismatic paeans to earthiness. In his later works like A King Alone, his stunning nature writing turns dark and takes on an air of foreboding: nature becomes cold and withering and empty.

Although A King Alone is a detective story set primarily in the 1840s in an Alpine village in Haute Provence, it wears the moniker lightly. The book’s events play out in a strange world of cloud and snow in which the mist’s persistent erasure boggles pursuit and low drifting clouds sweep away the firmness of the world, making the presence of the killer as diffuse and haunting as a dream. In keeping with his emphasis on nature, Giono deforms the basic structure of the detective plot, returning it to its primitive precursor: the hunt.

At the heart of the story lies the mysterious Langlois, who visits the village one winter to solve a bizarre series of murders and abductions. Langlois is the “king” of the title, supremely self-possessed, unerringly competent; he is a potent crossbreed of the monk and the military man. Langlois makes short work of the murder mystery, plying two quick rounds into the gut of one Monsieur V., a nondescript man living one village over. It’s at this point that the novel’s strange scope becomes clear—Monsieur V.’s motives are never given, and we never hear him speak a word. It’s not the facts of the murder that are being hidden by the village’s phantasmal atmospherics, but something much deeper. Giono plunges into other mysteries, leaping from the puzzle of Monsieur V.’s murders to the hunting of a dangerous wolf, and settling at last on Langlois himself.

Giono, obsessed with ritual, gives his propulsive hunting scenes a metaphysical cast. When the townspeople engage in a massive battue, driving the wolf from its coverts and toward the poised pistols of Langlois, the atavism of the act comes through clearly. The cloaking of modern actions in older rites and the subsequent revelation of petty paganism are a fond pastime of Giono’s; later, the townspeople will once again enact a battue, accosting a woman once close with Langlois and attempting to draw out her memories of the mysterious man.

In the hunt, nature is reduced to a language, a legible mass of bent branches and pawed snow. The thick lovely tapestry of Giono’s prose settles often on a majestic beech tree growing by the village sawmill. The vital, elastic energy of these descriptions is impressive, as though the sentences themselves sprang directly from the soil:

And it was (at the time) filled to the brim with birds and flies; it had as many birds and flies as leaves. Crows, rooks, swarming things plowed into it and shook it continually; at every moment it released splashes of nightingales and titmouses and vapors of wagtails and bees; it breathed out falcons and gadflies; it juggled multihued balls of finches, goldcrests, robins, plovers, and wasps.

The beech tree—which, in another description, “dance[s] as only supernatural beings know how to dance, its body proliferating around its immobility”—is transformed into a totem of impassable vitality, reminiscent, in a way, of Langlois himself, whose desires we never learn, and whose past is shrouded in fog.

A King Alone is a ghostly romp, alluringly impenetrable, but at times Giono overplays his hand, making the story a touch too oblique. The last third of the book is given over to the recollections of a woman named Sausage, who recounts the years she spent working for Langlois in a wry, bitter, folksy tone that feels odd shoved up against the book’s prior mistiness. Giono’s parochialism likewise rears its head. His books, marked with the concept of terroir, of the flavor of place, are rife with close-knit communities and ponderous begats, but the renewed insistence on detailing the trivialities of village life in this last section bogs the book down. Throughout A King Alone, Giono is constantly pulling back, testing how little he can provide the reader, but in the end he pulls back too much, and Langlois is lost to us—and to himself.