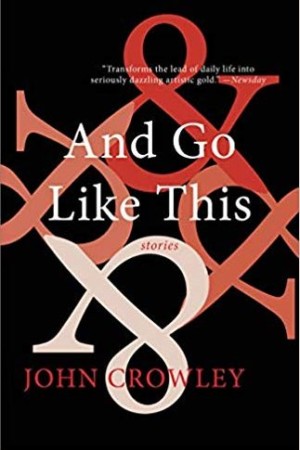 John Crowley’s latest collection, And Go Like This, brings together ten stories that have been published in the last two decades. Lauded by Harold Bloom as one of the greatest American writers of his generation and admired by fellow fantasy luminaries like Ursula K. Le Guin and Neil Gaiman, Crowley has been publishing science fiction and fantasy works steadily since the 1970s, though outside of that community he remains something of a writer’s writer. The stories in his latest collection range in style from autobiographical realism (with several set in mid-century Indiana, where Crowley spent his formative years) to the potent brand of hermetic fabulism that has defined Crowley’s most acclaimed works, among them Little, Big and the Ægypt tetralogy. Not all the offerings are successful, but overall it’s a bravura outing, one that exhibits in spades Crowley’s gift for subtle enchantment.

The collection’s title story is an airy feat of hypotheticalism, literalizing a quote from Buckminster Fuller to the effect that there is enough indoor space in New York City for the entire world’s population to comfortably, and simultaneously, perform the twist. Loneliness is the collection’s great theme, and the needle drop on which “And Go Like This” ends—with untold millions preparing to twist in perfect harmony—becomes a spell against that loneliness, a vanquishing of the creeping feeling of anonymity that affects so many of Crowley’s characters.

Curiously, the least fantastical of the stories in And Go Like This stand out as the collection’s best. “The Girlhood of Shakespeare’s Heroines” is set at a summer camp in late 1950s Indiana. The narrator, a Crowley stand-in, falls in rapturous, spoony love with Harriet, a bespectacled free spirit, though their frantic, adolescent trysts are cut short when they’re both stricken with polio. Later, as weary adults, they come back together, the second life of their love now marked by tentativeness and uncertainty.

Crowley’s taste for the autumnal is on full display in the collection, suffusing even his tales of youth and enchantment with the dusty slant of October light and the steadfast, simple elegiacism of a Thornton Wilder play. “This is Our Town” follows a young girl on the night of Halloween as she’s abandoned by her friends and has a spiritual experience while crossing an old bridge:

I set out on the bridge over the hobo camp, where maybe once a child had been killed though probably not. I could see a kid ahead of me on the bridge, in a white sheet like a ghost. When I looked again he wasn’t there, but I thought he wasn’t actually gone. And then again he was there, but only sort of. He was dawdling, as though he wanted me to catch up with him and maybe be with him, and he’d take me with him as Sister Rose of Lima had said; but he didn’t seem dangerous or evil to me, just lonely and sad.

This cool narration is par for the course in Crowley, turning the spectral mundane: the ghost is merely one more lonely soul, a kindred sufferer. Like so many fairy tales, “This is Our Town” is about growing up, about the sloughing off of all our illusions and misunderstandings, and about the strange détente we seem to reach with the fragments of our former selves. At the story’s close, the girl bemoans the loss of imaginative control that attends adolescence: “I just wish that once again, just once more, I could believe that the ways of changing things are mine too, that I am a writer of the world.”

The book’s falsest step is probably “Spring Break.” A hollow updating of Poe’s “The Cask of Amontillado” set at a futuristic Yale University, the story follows a young man who is lured into the untouched stacks of the university library by a librarian who is, from the start, pretty obviously a serial killer. The kid gets knocked out and entombed with books, though he’s later rescued by a friend who tracked his phone. Crowley goes ecstatically overboard with his future-speak, a silly salmagundi that reads like a cross between the gee-whiz ebullience of a George Saunders story and the tilted cockneyisms of A Clockwork Orange: “I put on my droops and the gimme swechirt and 2016 cap went out with my class into the quad.” The story seems nothing so much as an excuse for Crowley to deploy this humdinger of a line: “In a Library no one can hear you scream.”

Crowley’s prose has always been attuned to small wonders and the revelations of the miniscule. An unobtrusive animism pervades the collection, as when the pieces of a Shakespeare board game fall and bounce across the floor, “rattling into corners and under things in that purposeful way that small dropped things have.” Crowley’s interest in the experience of anonymity goes a long way towards explaining his attraction to the intimate reverberations of objects: the attraction is, in the simplest sense, a sympathy with the things that go unnoticed. In a similar vein, the reverse telescopy of his gaze transforms a river at night into “an onyx meander in the darkening green,” a necklace of emerald and slate.

The creative potential of anonymity is most evident in “Anosognosia,” another story set in 1950s Indiana. Here, Crowley envisions an alternate history for himself: John C., a nondescript child, falls down the stairs, suffers a concussion, and wakes up to find that he has become intensely ambitious. Decades later, he’s a screenwriter in California, haunted by the other life he might have led had he never taken his youthful tumble: a quiet existence of writing and teaching on the East Coast that mirrors Crowley’s own autobiography. What we’re meant to take away, in part, is that John C.’s original “minimal ambition” and sense of being overlooked are what fuels the fantasy that Crowley writes. Perhaps we should be glad his work isn’t as widely read as it deserves.