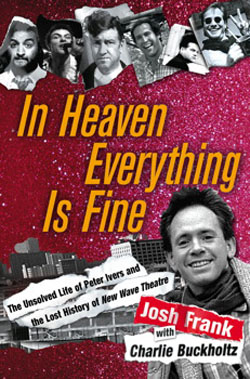 In Heaven Everything Is Fine

by Josh Frank with Charlie Buckholtz

Although I am not a fan of punk rock and am only marginally interested in performance comedy, I was nevertheless fascinated by this artfully told and well researched biography of Peter Ivers. The title comes from the song that Ivers wrote and sang for the “Radiator Lady” inset of David Lynch’s disturbing and hilarious 1977 film Eraserhead.

I was a graduate student in English at Harvard in the late sixties, the era when Peter Ivers and his friends (the likes of Tim Mayer, Stockard Channing, John Lithgow, and Harold Ramis) congregated at the Harvard Lampoon, Mayer’s experimental theater, and Club 47. I was preoccupied at the time with local poets, fiction writers, alternative journalists, and the founding of Ploughshares literary magazine out of the Plough and Stars, and it is a revelation now to learn that so much talent in pop music, experimental theater, acting, and performance comedy was burgeoning in those years, more or less around the corner.

Peter Ivers stands as a charismatic figure to his world much as Neal Cassady did to the Beats a decade before, except that here the stakes are those of big money as well as enlightenment. The Harvard actors and performers graduated to New York and Hollywood. The Harvard Lampoon was the crucible for the National Lampoon, co-founded by Ivers’ friend Doug Kenney (who also co-wrote the films Animal House and Caddyshack), and for the National Lampoon Radio Hour, which eventually led to Saturday Night Live. Harold Ramis went on to Ghostbusters and Vacation fame. John Belushi and Chevy Chase were intimates of Ivers. Ivers himself, who studied classics at Harvard, learned to play blues harmonica from Muddy Waters, and became a recording artist, songwriter, poet, artist, and performer himself, “best known as the elfin host of the 1980s L.A.-based cable show New Wave Theatre, a precursor to MTV.”

Authors Frank and Buckholtz portray Ivers as an underrated “artist and pop culture visionary,” whose murder by bludgeoning at age thirty-six in Los Angeles, just as he was breaking away from New Wave Theatre, cut short the promise of an even more influential career. The murder was never solved, and the authors believe that David Jove, the producer of New Wave Theatre and since deceased from cancer, was the culprit. Thanks to the authors’ efforts, the case was reopened in 2006.

The book sets out by telling us how and why Ivers matters, within the framework of his murder case. The investigators’ reports, both past and present, punctuate the narrative of Ivers’ personality and career, a narrative based on interviews with family and friends and on Ivers’ own words and work. The tactic is reminiscent of Truman Capote’s documentary novel In Cold Blood.

Despite the protests of his times, Ivers does not seem motivated by politics so much as by a psychological conflict with his staid and affluent father back east. After Ivers has become a celebrity, there is a telling episode involving a benefit performance for the Radcliffe arts programs with his parents in the audience. He threatens to perform in a diaper, but relents and appears in a black-tie suit instead, albeit with a shiny pink tie. We are told that Ivers’ father, Paul,

had never forgiven Peter for betraying him by snubbing the family business, for wasting his money and dashing his dreams to pursue the bohemian artist life. Over the years, his rage had hardened into a thick scab of bitterness and distance . . . By the end of the night, though . . . suddenly [Peter] was the talk of the room, with some of the wealthiest people in Boston falling over each other to congratulate and thank him. This left Paul in something of a quandary. Many of the people he respected most in the world—the people he would have liked his son to become—were showering Peter with admiration and praise.

Ivers’ father at last looks on him “with something like respect.” The coup de grace, however, comes when Ivers pays his father a lump sum later for his upbringing, thereby settling the score.

We need more psychological insights like this to help us imagine Ivers fully, to take us inside his psyche the way that Capote manages to take us inside the psyches of his characters. For all the wonderful documentation and narrative organization of this book, the authors leave us contemplating the outward celebrity of Ivers and do not bring him intimately to life. Perhaps more interpretative attention to his work would help here. Capote, of course, had the advantage of interviewing and directly interacting with his subjects before they were executed.