Skip to content
The Effort of Communion: An Interview with DeWitt Henry 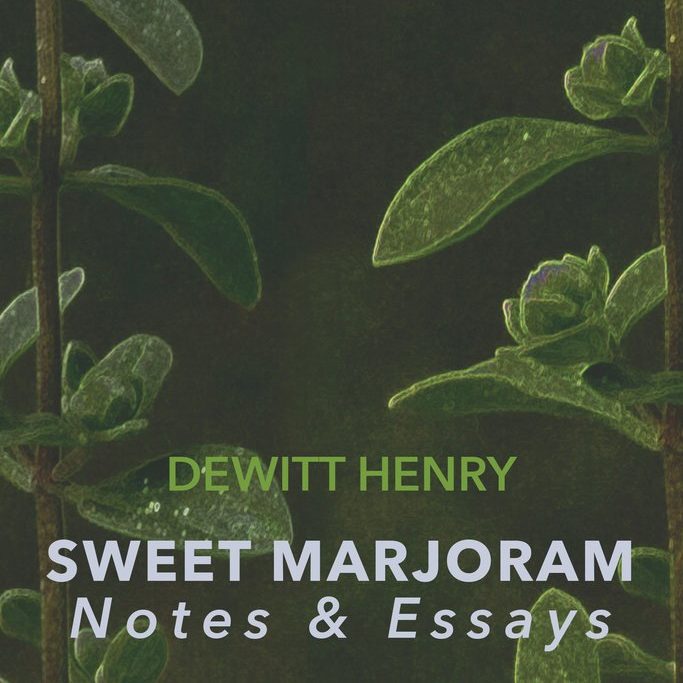 The Effort of Communion: An Interview with DeWitt Henry

Michael Steffen, Boston-area poet, interviews DeWitt Henry about his most recent book, Sweet Marjoram, a book of essays published in 2018 by MadHat Press. DeWitt Henry is a founding editor of Ploughshares, one of America’s most prominent literary journals. He has published five books of prose and is Professor Emeritus at Emerson College.

Michael Steffen: The title of your new book, Sweet Marjoram, is resonant with the title of your memoir, Sweet Dreams. People love sequels, but do the two books compare, as suggested by the titles?

DeWitt Henry: Consciously, no, not at all. The “sweet dreams” of my childhood memoir were my family’s American dreams of the 1950s, which followed on the terrors of the Depression and the Second World War. Dreams of WASP privilege, probity, affluence, and of belonging to the ruling class, all made possible, ironically, by the business of manufacturing sweets (my father’s candy company, inherited from his father). Also when my mother wished me sweet dreams as a child, she meant the opposite of nightmares—that is, comforting dreams of joy, love, health, “goodness and mercy.” And yet, in coming of age, I woke to cultural, personal, and family flaws. In fact, my working title of the memoir had once been “tribal scars.”

“Sweet Marjoram,” on the other hand, emerged from a list that included “Lost in Thought,” “Semantic Antics,” “The Words We Carry,” “Trim Reckonings,” “Bywords,” “Mindplay,” “Bright Threads,” and “Calibrations.” Because of my preoccupation with Shakespeare—following on decades of teaching the plays—I wanted something from Falstaff, perhaps, or from Feste. But then I thought of Edgar in King Lear and the impromptu password that he offers the maddened Lear on Dover Beach: “sweet marjoram.” Originally I took this as sympathetic nonsense, but a footnote explained that it was an herb thought to cure madness. In confusing and tragic times, I hope that my essays signal a similar human allegiance and regard.

The two books share the importance of literature in a life. Perhaps the continuation of memoir in Sweet Marjoram, where in senior years, the writer’s thinking and his processing of public and personal history is a natural and consistent progression from the young writer’s emerging in Sweet Dreams. Sweet Marjoram also serves as a kind of biographia literaria, I’ve mentioned most of my inspirations in the essays themselves. James Alan McPherson, for instance, and Richard Yates, and Hamlet’s meditations, where Shakespeare followed Montaigne.

MS: The password from King Lear reminds me of a poem by Seamus Heaney, “From the Frontier of Writing,” which describes a military road check on a driver in a car, where “everything is pure interrogation.” What comes across so powerfully in the poem is that idea of a border between thought and writing. Have I read too much into that?

DH: Heaney might also be alluding to T. S. Eliot in “East Coker”:

[ … ] each venture
Is a new beginning, a raid on the inarticulate
With shabby equipment [ … ]
Undisciplined squads of emotion.

I did, self-consciously and playfully, invent a form to lend discipline to my forays. In one of the most ambitious essays, “On Empathy,” I begin with my irritation at this overused word and explore contradictions in its definitions and common usage. Then I bring in literary references that come to mind: George Eliot, Thom Gunn, E. M. Forster, President Obama, and Shakespeare. I turn to research by contemporary psychologists, including Paul Bloom’s 2016 book, Against Empathy; relate my personal failures to be empathic; cite a study that finds today’s college students emotionally deficient “as products of the wired world” and recommends “neural calisthenics [ … ] to reverse the trend”; and close with my hope and belief that even wondering about the problem helps to correct it.

MS: Not everybody has read Bacon or Montaigne—those were the authors that came to my mind and lit up Sweet Marjoram in an exciting way for me. Yet thanks to the internet, ordinary readers these days are used to partial or fragmentary reading. Your topical essays have this appeal. Any insights on how the style came to you?

DH: Clearly our blogs and social media personas chart daily passing thoughts and sometimes add up. They are something like cracker barrel discussions in an old-time general store. The wired media has offered me, now in my seventies, a seemingly infinite store of references. In addition, I have renewed access to my physical print library. After emptying my Emerson office, I built walls of bookshelves at home. Many of my books had been boxed for storage, now they faced me like forgotten friends. As I free-associated on a given topic, I could revisit memorable authors and relate their meanings to the topic and my life. I could follow my whims and instincts. That was freeing, outside of classroom teaching. It may also have grown from my earlier editing of anthologies and from the editorial dialectics of Ploughshares. I feel some affinity with David Shields’s Reality Hunger: A Manifesto (2010). I enjoyed the collage approach that Shields invoked, both in poetry and prose, as well as his own mental sprezzatura.

MS: Do any of the essays from Sweet Marjoram stand out to you as having been particularly difficult?

DH: “On Blood” was the most difficult, mainly because of the amount of complicated information I had to digest. I’d been drawn to the idea of blood, for instance, by Shylock’s “if you prick us, do we not bleed” (and all the blood imagery in Merchant of Venice). But there’s both the mythology and science of blood, the incompatibility of blood types, the idea of leeches and bleeding. (Who knew that red and white striped barber poles originated because barbers were the bloodletters?) The relatively recent history of transfusion. The confusion of “blood relations” and genetics, which the Nazis twisted into eugenics and the Holocaust. I wasn’t sure how to end it, but then I did, with my own family’s mixed heritage and the irony of black sheep in families and the elective bonds of friendships “like family.”

MS: Did any of the essays seem to come jumping right out of the pen?

DH: “On Handshakes,” which began from the endless handshakes of congratulation after graduation and ended—a surprise to me!—with Keats’s final poem, “This living hand [ … ] I hold it towards you,” and the realization that my writing, too, was an effort of communion, inviting the reader’s grasp.

DeWitt Henry’s Sweet Marjoram: Notes & Essays is out from MadHat Press. For more about the author visit www.dewitthenry.com.