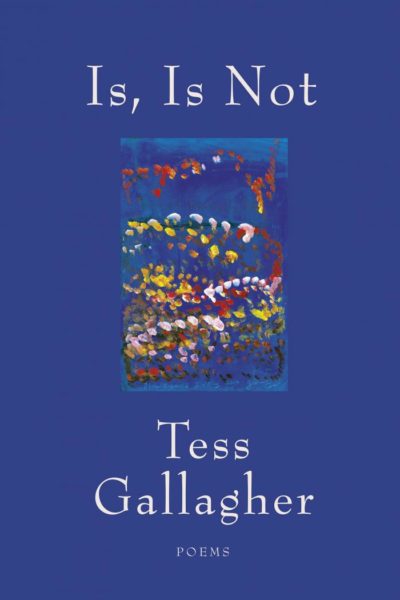 Tess Gallagher is the author of eleven books of poetry, including Midnight Lantern: New and Selected Poems, which represents forty years of work, and Moon Crossing Bridge, which earned high praise for its treatment of grief. She has won numerous awards, including fellowships from the Guggenheim Foundation, the National Endowment for the Arts, and a Maxine Cushing Gray Foundation Award.

The coastal landscapes of Gallagher’s two Northwests—Port Angeles, Washington, and County Sligo, Ireland—inform her work deeply and prompted her to write the “Afterword” to Is, Is Not, her most recent collection. Here she explains how she writes “from the edge,” a “poetry that seeks a language beyond the very one in which it arrives,” and that is “in some sense beyond language.” The poems in this collection sometimes clarify this claim, showing how she can turn the inarticulate into a coherent lyrical expression, and sometimes obfuscate it.

The collection consists of eight sections, each with its own epigraph from poets ranging from Osip Mandelstam to Sengai Gibon, Choha, Philip Larkin, and Jaime Sabines. The epigraphs, on eternity, on time, on death, are in subtle conversation with each other as well as with the poems they preface, creating a poetic community across time and space. Though many solitary landscapes appear in Is, Is Not, there is a sense of continuous communication throughout the collection: many of these poems are dedicated to family members and painters as well as to fellow poets.

Gallagher also writes essays, short stories, and translations. In an interview in Willow Springs, speaking about the difference between her prose and her poetry, she described the latter as “intimate and more generated in my own theater.” Her poetry’s focus on autobiography and the personal—the drama generated in Gallagher’s own theater—leads to work that is sometimes difficult to access, because it is so self-referential: the stage, the setting, the drama, the resolution are all too much of one private act. But there is one poem in Is, Is Not that reaches beyond the individual scene and into the more universal experience of togetherness between daughter and mother. In “Almost Lost Moment,” private details serve to create the feeling of being in unison with another human being:

coming back in an incidental way,
claiming to be the most beautiful
moment of my life: braiding
her waist-length white hair by the Pacific
at La Push. Hand over
hand, the three-way crossings
of apportioned strands, and quiet,
her head braced against my gentle pull
as she gazes out. Both in our sea-minds,
And quiet.
Quiet.

This is the poem in its entirety. The language is simple, direct, the idea of “sea-minds” evocative, the whole image timeless. Seamus Heaney’s elegiac sequence “Clearances” comes to mind, his memory of peeling potatoes with his mother on Sunday mornings, when everyone was at church: their “fluent knives” cleaning the potatoes, the splashes of water bringing them to their senses, him feeling “never closer” the rest of his life to his mother. His sense of loss, like Gallagher’s here, is changed into a sense of shared time, to assuage grief.

[ … ] Time funnels into work and leaps
out of reach like an idiot kangaroo
hopping all over the Australia of any need-contorted
life.

is rooted too much in the poet’s personal lexicon to be truly reaching outwards. What is an idiot kangaroo, and how can time funnel into work, while also leaping like a kangaroo?

“Deer Path Enigma” is similarly closed off from the communication of meaning expected of language, no matter how poetic:

[ … ] An arbor of blustering
neon goes dark in the borderland
of word-wrecked freedoms. Out of this
overlay of the human, the doe
uncoils herself with power
that is not retreat, just
the nothing-else-that-could-happen,

as my uninhabitable shadow
triggers her fear-plundered heart.

Are shadows ever habitable, or inhabitable? What does “the-nothing-else-that-could-happen” do or mean in the context of these lines?  If this is writing “beyond language,” how does it take us into the inarticulate, how does it hover at the edge of language? T. S. Eliot said that poetry can communicate before it is understood, but doesn’t it require some commonly recognized symbols, at least, in order to communicate?

In the poem “As the Diamond,” dedicated to the poet Medbh McGuckian, whose exquisitely cryptic poems have been the subject of much critical discussion, not all of it positive, Gallagher reveals her relationship to the reader:

So it is when a reader opens the poem’s
in-breathing—that which we took care
not to press too fully upon them
for fear we might extinguish the spirit’s outlaw
vagabonding with freedom’s
quarrelsome uptake.

Gallagher returns to this idea of protecting the wildness of poetic inspiration in her afterword, writing that “I find myself trying to out-leap what I can almost say—but that, if said outright, would utterly spoil the secret cargo that must somehow halo what is attempting to be given.” This method of “almost-saying,” of trying not to “spoil the secret cargo” or “extinguish the spirit’s outlaw vagabonding,” as in “As the Diamond,” often seems to consider the reader by talking about her rather than making an offering of language to her.

“Recognition,” the epigraph to Is, Is Not, is an exception to this. Like “As the Diamond,” it is an ars poetica, although a far more oblique one. Unlike “As the Diamond,” it makes no mention of the reader, instead giving its readers a sense of how the poet intuits the place of the self in a world that is constantly flowing and changing:

Staring down from the bridge
at the moon
broken up
in the river, who
could know, without looking
up, it stands whole above
its shattered self.

In a few lines, this poem brings together the world within and the world without and gives a useful metaphor for how the poet looks from above on her image. Is, Is Not is a thorough and unapologetic exploration of the self. Gallagher’s poems, like the shattered reflection of the moon in the ever-changing flowing water of the world, reveal various parts of that self—sometimes coherent, sometimes ambiguous and evasive—as it is transformed by experience.