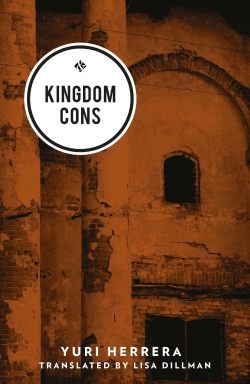 Kingdom Cons is the latest translation of Yuri Herrera’s works. Originally Los trabajos del reino, it is Herrera’s debut novel, but it was the third to be translated into English by Lisa Dillman. Kingdom Cons tells the story of the Artist, a destitute singer-songwriter who wins the favor of “the King.” At the “Palace,” the Artist becomes part of the King’s “Court,” in charge of singing his praises.

Herrera’s writing hovers somewhere between myth, fairy tale, and contemporary drama. Take, for example, the setting of Kingdom Cons, which is never disclosed. The story could unfold in a border town, an eighteenth-century court, or Moctezuma’s Tenochtitlán. The Artist’s first description of the King’s Palace reads thus:

It was exactly as he’d always envisioned palaces to be. Supported by columns, paintings and statues in every room, animal skins draped over sofas, gold doorknockers, a ceiling too high to touch. And more than that, it was people. So many people.

This sense of ambiguity extends to the characters in the text. Like the King and the Artist, none of the characters in Kingdom Cons have names. Their names are descriptors of their function at Court: the Jeweler, the Journalist, the Doctor, the Witch. The characters feel archetypal, like Tarot cards, but on the plinths of these archetypes Herrera etches a detail or two that makes them irredeemably human.

The Artist moves into the Palace, where he becomes part of the King’s Court. Scraps of gossip, captured as he walks down a corridor or stands behind a draped column, become the subjects of his ballads. He sings of the King’s deeds, and those of his courtiers, frothing egos with his voice. The King even grants him a lover, “the Girl,” who teaches the Artist the workings of the Palace. But then things get messy. The King is not all-powerful, as the Artist’s songs would have us believe, and the Palace is not impregnable. War is in the air. There are threats from other kingdoms. Courtiers are murdered on the King’s very turf. The Artist falls in love, but not with the Girl, as he is meant to. His heart is contradictory, like all human hearts, and it has to long for the one woman he is not meant to want, the one person trying to escape the Palace as everyone vies to get in: the Commoner, the Witch’s daughter, the exclusive property of the King, no less.

Reading Kingdom Cons, one may feel compelled to associate Herrera’s novel with the relatively new genre of “narcoliterature.” Mexican narcocorridos, also known as drug ballads, trace their lines back to the corridos of the early twentieth century, songs written during the Mexican Revolution to praise the doings of popular leaders like Emiliano Zapata and Pancho Villa. Fast-forward one hundred years and little has changed, except it is now drug lords, narcotraficantes, who are praised in song as strong leaders. Herrera spent considerable time in Ciudad Juárez, one of the largest cities in the Mexican border state of Chihuahua and home of the Juárez cartel. One can read his novel as an exploration of the world of US-Mexico drug trade, and the role that narcocorridos play in perpetuating a positive perception of drug lords, but much of the richness of the text is that it can also be interpreted in myriad other ways. There is nothing in the novel that anchors it to this particular reading; the words “drug,” “drug lord,” or “cartel” are never used in the Spanish original or the English translation. Of course, it is easy to jump to conclusions: the King must be a drug lord; the Artist has to be a writer and performer of narcocorridos. But interpretations like these would be facile, not taking into consideration the great craft of Herrera’s writing, which strikes a beautiful balance between this constant ambiguity and a tenaciously strong plot. The ambivalence in certain elements of the story does not make Kindgom Cons any less of a page-turner.

One of the things that makes Herrera’s novel difficult to translate is its regional color. Mexican culture is not homogenous; there is great diversity within the country. Different geographical regions have distinct identities, and elements of these identities become apparent through language. The Spanish of Kingdom Cons has expressions used in the north of Mexico. This local flavor, closely associated with its culture, is practically impossible to translate, and still Lisa Dillman does a phenomenal job. Take, for example, the word “raite.” In northern Mexico, notorious for its culturally porous borders with the US, this is a transliteration of the English word “ride,” assimilated into Spanish as an Anglicism. Dillman translates the popular expression “pedir raite” into its English equivalent, “hitch a ride.” This is perfectly fine, linguistically, but the process of translation cancels the Anglicism in the Spanish. The cultural porousness conveyed in this type of hybrid language disappears; readers will never find it in the English translation. But what else could Dillman do? There is no easy way out of problems like this. Translators, in particular literary translators, have countless linguistic possibilities to work with, and they must always make a choice. One way or another, those choices imply sacrifices. Thankfully, most of the time Dillman’s choices are the right ones.