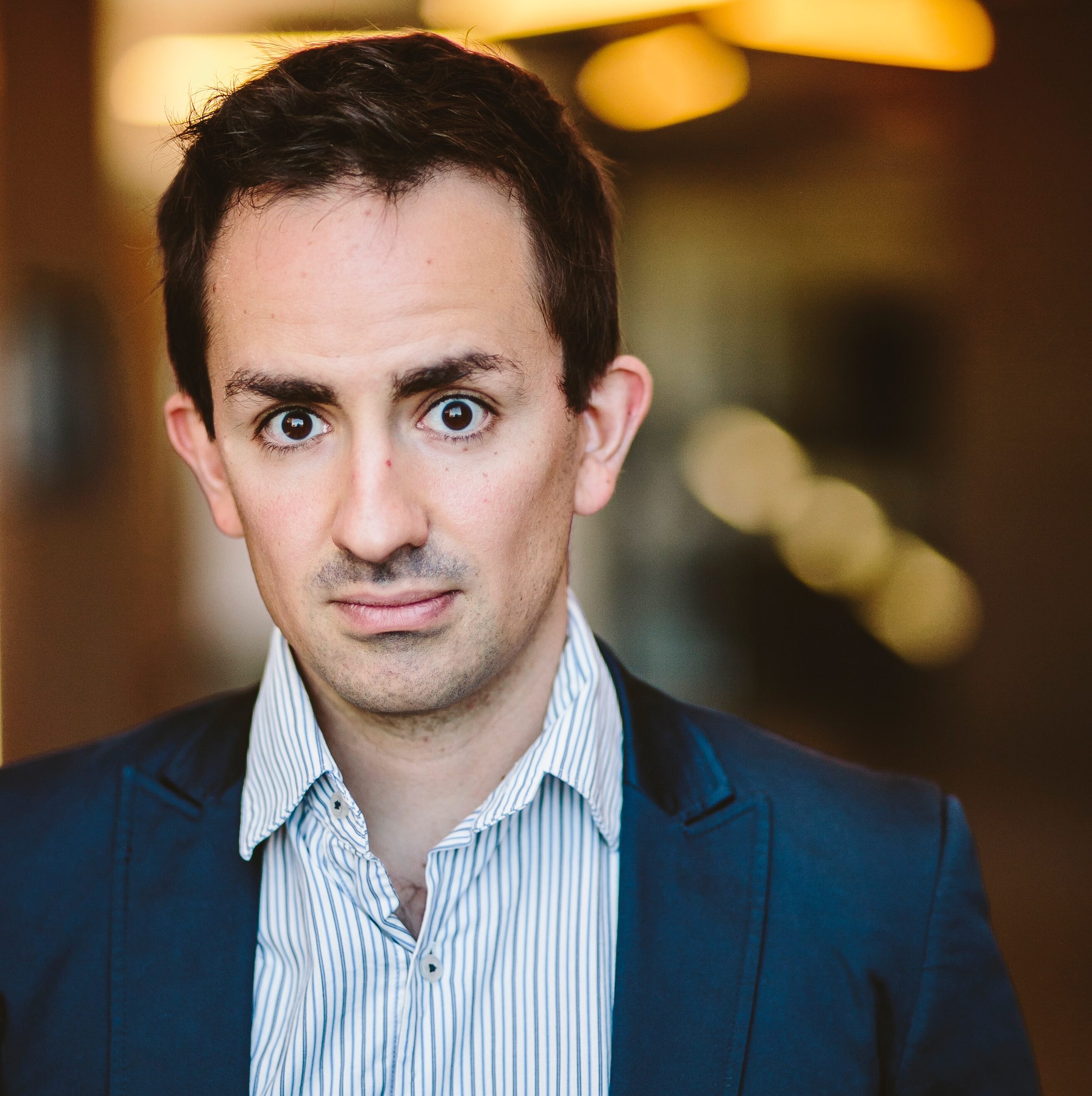 Gabriel García Ochoa’s debut novel, The Hypermarket, came out last year with La Casita Grande. In this interview with Harvard Review associate editor Cecilia Weddell, García Ochoa discusses the novel’s influences, his writing process, and whether there’s any hope in a world where our place in society is determined by the whims and regulations of an enormous supermarket.

Cecilia Weddell: The novel opens in a place familiar to us at Harvard Review: the Houghton Library at Harvard University! This is a modern library—the stuff of legend in the world of libraries—and a real one. In the novel, the narrator is working in Houghton Library when he discovers some pages of a centuries-old diary describing a place called the Hypermarket. Reading this account, I sensed the influence of another library, one less real than the Houghton, Jorge Luis Borges’s Library of Babel. The way you build our understanding of the Hypermarket is as meticulous as Borges in his story about a seemingly infinite library. You’ve created an architectural blueprint of this seemingly infinite supermarket within which the diary writer lives. Can you say a bit about Borges’s influence on your writing? And about how libraries—real and fantastical—bring shape to this story?

Gabriel García Ochoa: Spot on, you killed two birds with one stone! The works of Borges have influenced me profoundly. My PhD was on Borges’s idea of the 602nd night of the Arabian Nights. The most crucial part of my research took place at Harvard at the Houghton Library. There, I pored over the Victoria Ocampo Papers and read letters that Ocampo and Borges wrote to each other. It was so exciting to hold in my hand unpublished documents signed by Borges, where he discusses some of his most fascinating ideas on language! I felt a sense of awe and great humility that I haven’t felt anywhere else. So, yes, to a great extent, that first chapter is almost a transcription of my experience with archival material at the Houghton Library, which I treasure dearly.

Funnily, “The Library of Babel” was not something I was consciously referencing in this first chapter! Now that you point it out, I can see it, of course, but I hadn’t put the two together. There are other elements of Borges’s work in that chapter that I was very aware of as I was writing: Zeno’s paradox of endless reduction from “Avatars of the Turtle”; the whole idea of maddening magical objects that turn out to be a curse on our minds rather than a treasure (like “The Book of Sand”); stories within stories; and most importantly, I would say, his ideas about the relationship between language and our perception of time. Long before the film Arrival, which touches on this idea, Borges pondered the notion that we experience time sequentially because language works sequentially (one letter, word, sentence at a time). He suggests that, were we able to come up with a nonsequential language, we would also be able to experience time in a different way. This is an idea that becomes quite important later in The Hypermarket.

CW: How funny that so much of the book is deliberately Borgesian and yet that particular part was not. What other influences bear on this novel?

GGO: There were quite a few, not only literary but also from different art forms. The chapter “Apollo and Daphne” is related to Ovid’s Metamorphoses, but in my personal mythology: Bernini’s sculpture of Apollo and Daphne takes precedence over Ovid (I saw the sculpture first in Rome when I was a teenager before I read Ovid, and it was one of the most transformational moments in my life).

Magical realism has been a big influence for a while. Gabriel García Márquez, Salman Rushdie, Haruki Murakami, Isabel Allende, Günter Grass, Alejo Carpentier (even though he precedes magical realism), Mikhail Bulgakov. I don’t know whether this has to do with being Latin American, or just being me, but the freedom of possibilities that comes with magical realism is something that I relate to very strongly and enjoy writing about. Some readers (and writers) really dislike this untethering from reality, but I find it liberating.

There are also academic influences. I have no idea what may be brewing away in my subconscious, but there are two conscious influences: David Damrosch and Mark Jurgensmeyer. Jurgensmeyer’s idea of the global, and what it means to be interconnected in this day and age, ties in well with the kind of braided narratives that I like. Damrosch argues that given the vastness of world literature, there are usually two approaches to teaching it: across space or across time. When you teach across space, you choose a certain time period (say, the twentieth century) and then contrast texts from different parts of the world within that time period. When you teach across time, you choose texts from different time periods, but usually the same region, and then consider why these texts had a global reach. I tried to apply these ideas to translation within the novel. We translate “across space” when we bridge linguistic gaps that can often be related to geographical spaces. But wouldn’t it be interesting if we also had to translate across time? (We already do this from past to present, to an extent, when we read adaptations of Chaucer’s works, for example.) But, as language evolves, I wondered, could translation be done from future to present?

CW: This is one of my favorite aspects of the book, as a literature-in-translation nerd and translator myself—the omnipresence of translation! Every scrap of text we find in this novel seems to have been manipulated by many hands before it meets its readers. You even have a character named Edith Crossman—a nod to Edith Grossman, famed English translator of many Spanish-language greats—who is an expert in the field of “Khróno-Translation,” translating from the future to the present.

GGO: Yes, translation is at the core of the novel. Much of my academic work has to do with translation between languages and cultures. Those ideas that are beyond my scholarly grasp, which I cannot look into in my academic work, can be freely explored in fiction. I am happy to see you spotted the reference to Grossman, whom I greatly admire. And you know, the notion of texts being sieved and transmuted by countless hands, that comes from Borges, who talks about this at length in relation to the Arabian Nights.

CW: Because the book doesn’t follow a linear chronology, it takes a while to see the stories in this novel as all part of the same narrative. Some previously seen characters appear glancingly in other chapters; later on, an early side character takes on a central role in the history being built before us. It’s an intricate web, but many of the chapters—especially the earlier ones—could be read as standalone short stories. Were they ever, or did you always consider these characters and storylines part of the novel’s greater world?

GGO: The book was first conceived as a collection of short stories. One day, as I was working on one of the stories, I remembered a book by Carlos Fuentes that I absolutely adore, Agua quemada. The chapters in that book can be read individually, as stand-alone short stories, or together, as a novel. So I had the idea of coming up with something like that, and I started exploring the possibility of linking the short stories. I ended up with a novel, which I am happy with, but the short stories can no longer be read as single entities, or not all of them, anyway. So that duality of form that I was going for, which Fuentes achieves so masterfully … I didn’t get there, I’m afraid! Intersecting the characters, storylines, and rationale for the overall narrative in a way that seemed congruent and plausible was hard enough. The devil is in the details, and there are countless details you have to be careful with when you braid that many narratives, so I was in hell for a while.

CW: Speaking of hell … an infinite supermarket is—importantly—not the same as an infinite library. While this isn’t strictly a dystopic book, the Hypermarket and hyper-mercantilism as an organizing social system certainly feel like the dystopic end of late capitalism. The characters who see themselves as the resistance, seem resigned to fail at preventing a future that is already written, opting instead to “close the loop” and ensure a better past. Is there hope in this? Or is it too late for them, for us?

GGO: This story is not about changing a possible future or preventing things from happening, which is often the case in time-travel narratives. Here, the future, as you rightly point out, is very much written. The past is better than the future, and the resistance is about to fight a battle that they know they are going to lose. But they fight it anyway because someone has to stand up for what is right. The point is not the outcome of the battle but its principle. If they don’t resist, if they surrender, they are complicit. I don’t think authors should moralize, and I hope that this is not what I am doing here, but this last point is something I constantly come across as a human being: I rarely know the outcome of my actions. I try to be aware of the intentions behind such actions, but beyond them, once the deed is done, most of the time those outcomes are out of my control. I wish for certain results, but those wishes may or may not come true. I guess the question the story is asking in this case is: would we keep doing those things we think are right, even if the results are contrary to our expectations? I don’t know. Maybe there are times when we would and there are times when we wouldn’t. In this case, the characters in The Hypermarket think they should.

Gabriel Garcia Ochoa’s The Hypermarket is out now. You can read an excerpt at Harvard Review Online.