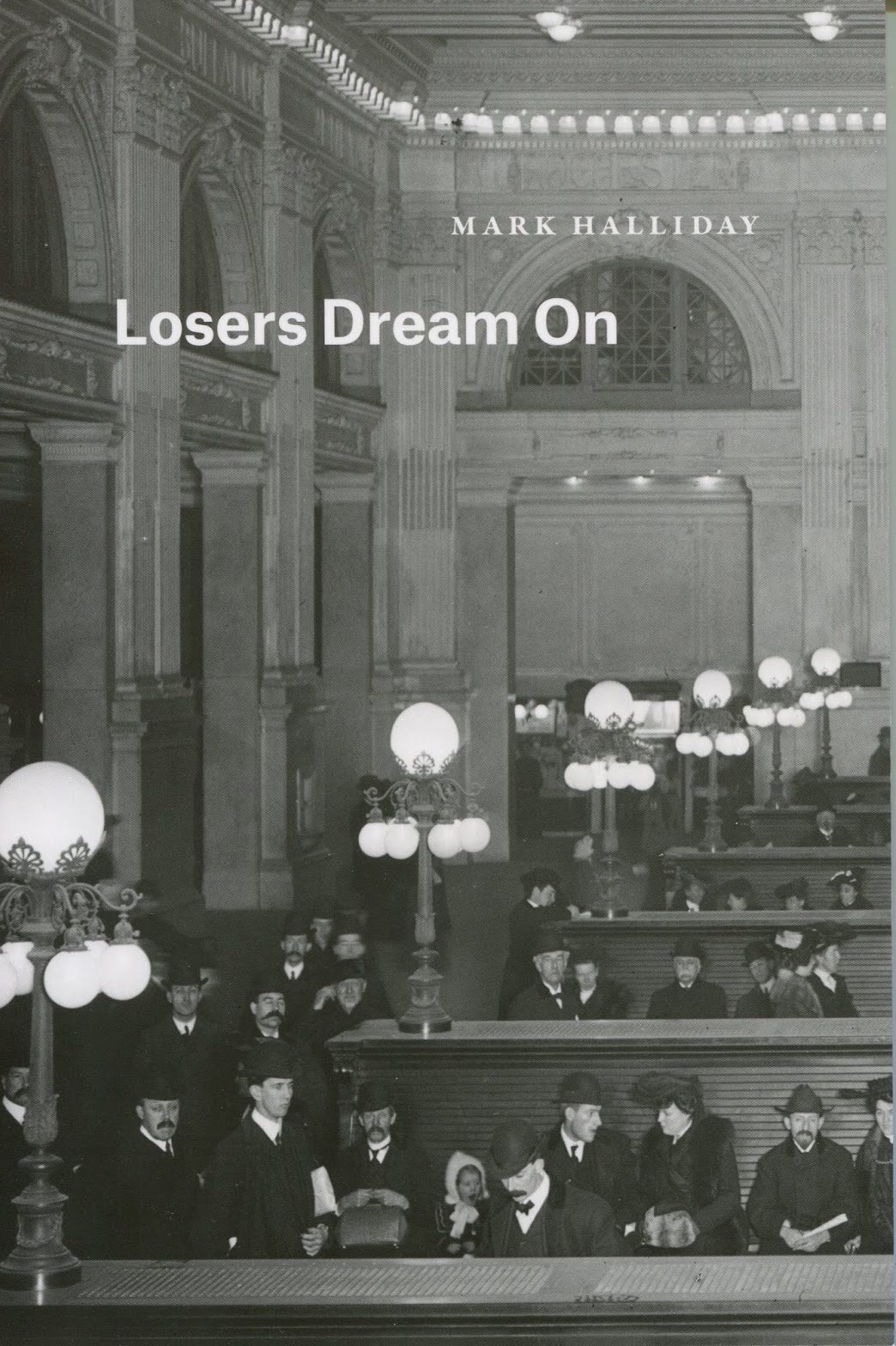 In Mark Halliday’s latest collection, Losers Dream On, he returns to topics that have preoccupied him since the publication of his first book in 1987: the passage of time, with its attendant losses, and the pathetic/tragic/hilarious twistings and turnings of the egoic Self as it resists inevitable changes. One response to the evanescence of everything we have or know or are is to try to save what Virginia Woolf called our “moments of being.” “Life, stand still here,” says Woolf’s Mrs. Ramsay in the midst of such a moment. It is Halliday’s special mission as a poet to demonstrate the futility of all such gestures, often while making us howl with laughter. Whether his hapless, self-centered protagonist is called “I” or “you,” we recognize ourselves in every one of Halliday’s brilliant, perceptive, and surpassingly witty representations of his generic messed-up human being.

One obvious thing we’d like to keep is our sense of “consummation—total arrival—being utterly there / with the beloved no longer apart,” as he says in “Our Love Problem.” Halliday’s speaker often enacts his doomed desire to nail things down by repeating himself in case we haven’t gotten the point. “Being sheerly / together,” he more or less desperately insists, “there in a healing unity of devotedness—”. But however you put it, or however many times you explain, such moments fade. Then we set out to get them back, wandering the boulevards at night,

at intersections swerving intuitively left or right
crossing the cobbled plazas
where brisk figures recede into some other life [.]

We’ve all been there, as he says in “Been There”—“high above the ignorant skeptical street [ … ] high up secret in that citadel”—but now we live with “flat cool emails and doormen saying ‘No longer here.’” And not only do our own moments of transcendent togetherness dissolve, but sometimes we have to listen to other people claiming to enjoy the perfection that ought to be ours. “I can hardly express how much I don’t care about your sex life,” he complains in the sublime “Your Paltry Conquests.” He wants to remember “transcendingness in the one life where this kind of transcendation / can happen and really mean anything.” But instead he’s forced to listen to humiliating stories about

what you did with B and L and H and a dozen others
two dozen whatever all of which is just humiliating I mean
your compulsive exudative mutually delusory Oh oh oh business
humiliates everyone if I stop to think about it
not that I ever do.

It is not just the “transcendation” of romantic/erotic fulfillment that we cling to; it’s any moment when things make sense and our existential issues go away. In “About Time” what eludes us is a moment of spiritual security, such as the one

Two Months Ago where you reached
a clarity you could live in, some provisional understanding
of what your life had come to
and how you’d get ready to ride on the rest.

Now, lamentably, you’re back on

the naked skinless edge of This Day
which is a dubious overproduced emergency
requiring hundreds of gearings of courage and caution
just to keep the favorite organism oneself operative
in the casually harmful flux.

I love the balance Halliday maintains between laughter (“the favorite organism oneself”) and sympathy for our common plight (“hundreds of gearings of courage and caution”; “casually harmful flux”). Halliday is not just riffing and joking. It is not too much to say that these are philosophical poems, pondering a central human dilemma. It’s worth noting that Halliday’s poems don’t resolve with what has become a favorite solution these days. Robert Hass’s “Meditation at Lagunitas” can stand for a whole class of poems that clearly thematize the issue of comprehensive loss but end by directing us to some local particularity, assuring us that the present moment is eternal if only we show up for it. “Blackberry, blackberry, blackberry,” he says at the end of that poem. Okay, blackberry. But this gesture has become so familiar as to be entirely comfortable. (Think of the ubiquity of Mary Oliver’s “Wild Geese”.) It elides the upsetting problem of what keeps us from showing up, moment by unsatisfactory moment, to begin with. That’s where so many of Halliday’s poems come in. The fun and games of Halliday’s poetry, the high-end hijinks, are not just entertainment but a demonstration of why our defenses don’t work. It’s up to us to figure out how to live in the mostly-pretty-uncomfortable present without them.

There is a new note in Losers Dream On, Halliday’s seventh book of poems, and that is the note of gratitude. If our opposition to time is a form of scarcity anxiety, then gratitude, surely, is its antidote. In “Poured” we receive not just enough, but plenitude beyond our wildest dreams. “What if it is all just given,” asks the speaker,

Here there is no anxiety to hang on. “It” just floods through us, and the only problem is how to give back. On it goes,

It could be argued that a weakness of Halliday’s poems is their overdependence on irony at their ends. “Poured,” for instance, ends with an ironic contrast between some writer’s piddling payback (“some odd interesting thing [you wrote] in your small notebook in 1983”) and the “ridiculously huge debt” we all owe for our lives. That seems to me a retreat from the vastness of the rest of the poem. To be overwhelmed with gratitude for what’s “given and given and given” is to let go of one’s separate self, whereas to feel self-conscious about the size of one’s contribution seems a return to individual aloneness. But perhaps that’s the point. We “get there” and then we’re lost again, baffled, searching, anxious. Halliday’s poems take up the never-ending dialectic between Being There and Nowheresville.