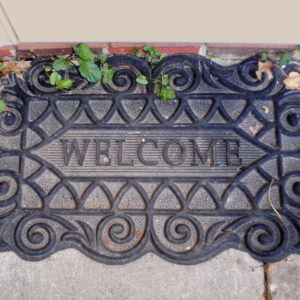 What do you mean, said the woman. I don’t feel druggy.

You’re completely drugged, the neighbor said. I’ve never seen you like this. They sat in the living room where clothes were spilling out of suitcases. The neighbor asked the woman if her husband would be coming for part of the time.

You never know, said the woman in a fed-up, druggy way. This meant that her husband was unreliable and she was disgusted and wouldn’t give the issue the dignity of an emotion. She rolled her eyes for an eighth of a second. Between the drug and her refusal of involvement the gesture was like a drawing that was almost completely erased.

Besides, she said seriously, he has things he has to do here. Now her tone and expression had a solemnity, as if she were talking about something with grave consequences, possibly medical.

Like what, said the neighbor. The woman listed a number of house projects that sounded vague and vast, prefacing each one of them with the phrase, He has to. He has to clean out the basement. He has to finish the guest room. And so on. The woman kept interrupting her conversation with the neighbor to yell upstairs in a foreign language to her husband and son. The neighbor understood some of the foreign language, but the woman spoke so fast and so carelessly that it was hard to understand her even in English, much less in the foreign language. Now the drug was causing an extra problem, a slight slur.

Will you be joining them this summer? asked the neighbor, and the husband, who was generally cheerful around friends, became quite sober. He had a lot of work to do, he said, but he was talking about his job, not about the house projects his wife wanted him to do. If he could get away at all it would only be for two weeks. His son, snuggled on his lap, whimpered and whined in protest. Two weeks! he said. That’s not enough! The man kissed his son and went on talking about his work. He didn’t want to exaggerate his own importance, he said, but at this point there were people who would have trouble doing without him at the office if he were gone very long. He talked about this some more. Abruptly, out of the blue, the woman asked her neighbor a wholly inconsequential question about a mutual friend. The neighbor looked at the husband as if to say, She’s completely drugged. The husband didn’t feel her behavior could be attributed to the drug. You’re drugged, the neighbor said to the woman.

She doesn’t feel guilty, he said angrily, as if this were a persistent grievance. The woman subsided and her question went unanswered. Later the man said of a woman they all knew, She’s going to BU, which stands for Boston University.

No, said the neighbor, she’s going to Brookline Village. By this time the son had been invited to his mother’s lap and was snuggled there.

BV, then, said the son. It was his first adult joke. She’s going to BV.

BV! said the neighbor. Exactly! But the child was sleepy and did not respond. He had a lot of decisions to make. He had to decide how long to keep his hold on the foreign language and when to let it gradually dissolve; whether to keep achieving at his current superstar level or to throw it all over in an act of rebellion; what he thought about his mother as compared with his father; and in general when to make his move. He burrowed into his drugged mother’s soft chest and listened to his father talk.