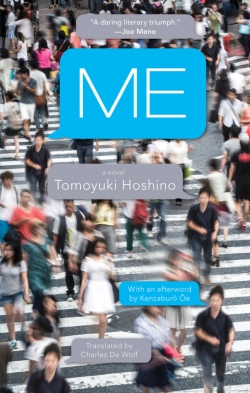 The title of Tomoyuki Hoshino’s new novel comes from a common hustle in Japan called the “me-me scam,” whereby a con artist calls an elderly person and only identifies himself by saying, “It’s me.” The victim, believing that they are talking to someone they know, is then swindled into sending money to the perpetrator, who claims to have gotten into financial difficulty. Scammers in Japan collectively extract $400 million every year from unsuspecting victims in this way.

ME begins with a similar scam, yet it transforms from a simple act of petty crime into an exploration of identity and individualism in a modern corporatized society. Hoshino, who writes both fiction and nonfiction, has won several major Japanese awards and had a number of his works translated into English. ME, first published in Japan in 2010, has now been translated as a result of winning the Kenzaburō Ōe Prize, named for the Nobel-winning Japanese author.

In the novel’s opening scene, narrator Hitoshi Nagano—a failed photographer turned camera salesman living in Tokyo—steals a phone on a whim from a stranger named Daiki at a McDonald’s. When the phone receives a call from the owner’s mother, Hitoshi pretends to be her son and claims that he needs her to send him money. She wires it to his account and laments that he never talks to her anymore. Hitoshi feels a pang of guilt, but ultimately keeps the money. From there, the story spirals into progressively stranger territory.

After a rough day at work and a night of drinking, Hitoshi returns to his apartment to find Daiki’s mother already there. Thinking he has been caught, Hitoshi confesses to his crime. Daiki’s mother doesn’t buy it. She truly believes that Hitoshi is, in fact, her son Daiki. Hitoshi plays along, but decides to go home to his real parents to make sense of things. This is no easy decision: Hitoshi hasn’t spoken to his parents in two years, since he told them he would be pursuing photography instead of a salaried office job. When he visits them, he finds another person there in his stead, acting as their son. This person looks and sounds like Hitoshi, but isn’t. His mother does not recognize her real son; Hitoshi is no longer Hitoshi.

“It’s like company work,” the new Hitoshi tells the original Hitoshi. “There can be personnel changes … but as long as operations run smoothly, life goes on.” From then on, Hitoshi becomes Daiki, and no one bats an eye. He himself accepts it, and without prompting, his coworkers call him Daiki as if that had been his name all along. Even his past betrays him, as his memories start to blur together with Daiki’s. In all meaningful functions in life, Hitoshi now is Daiki.

Hitoshi/Daiki continues to navigate his strange new reality, meeting more MEs—people who look, act, and think exactly the same as he does, yet who live separate lives. At first, it’s a cause of celebration and relief. Hitoshi/Daiki strikes a close friendship with the replacement Hitoshi and another ME (also named Hitoshi Nagano, but referred to as “the student” for clarity’s sake). Though their interactions are at first bewildering for the reader, especially since there are three characters who more or less share the same name, this confusion serves to blend the MEs into a single persona, mimicking the way they increasingly experience themselves.

On their first night together, the three MEs drink and exclaim: “There’s no other here. It’s like I am you and you are me.” They take it further, agreeing that their families are the real others, as well as where otherness itself begins. “My parents barely know me,” the new Hitoshi says. “From the time I was born they only saw their children as they wished to see them and made sure they were blissfully ignorant of what they didn’t want to know.” This realization is a logical, if extreme, extension of the “me-me scam”: if family connections were strong, the scam would have a much lower success rate. The fact that people are so easily tricked out of their money in this way is an indictment of the state of the family unit in modern Japan.

This is not Hoshino’s only critique of modern Japanese society. While the novel takes place in Tokyo, there is almost nothing about its depiction that distinguishes it from any other city. Hoshino’s characters eat almost exclusively at McDonald’s, work at big box stores, and hang out in bars. Tokyo itself seems to have lost its identity, so it is only natural that the characters struggle to find theirs.

There is one important exception to the blandness of the novel’s setting: Mount Takao, where the three MEs establish a haven called “Our Mountain.” They drink and take turns griping about the people in their lives, “basking in the quiet happiness of simply being together.” The joy they take in their mountain refuge is easier to understand when put into the context of Hitoshi/Daiki’s inverted conception of identity. He describes being alone as “off mode,” whereas around others, his “troubles would begin in earnest. I would have to deal with parents … have chummy conversations with coworkers, and otherwise explain myself … I cherished the time I had to myself, since it was only then that I could chill out and stop being me.” When Hitoshi/Daiki is alone—or with other MEs—he is no longer an individual, no longer himself: “And if [everyone else was] all ME, we would have perfect mutual understanding,” he thinks, and “There would be no need to push the on button.”

As the MEs begin to proliferate, the bond between the three sours. The utopian comfort of having no identity becomes a mortal threat. Nearly everyone in Tokyo becomes a ME, and “Our Mountain” transforms into a dystopian hunting ground, where MEs kill and are killed and then reincarnate into other MEs. The reincarnation is a nod to Buddhism, an aspect of traditional Japanese culture which stands out sharply against the backdrop of mass consumerism that dominates the early stages of the novel.

ME is a searing critique of how the individual’s sense of self erodes under the weight of modern urban culture in Japan. As Hoshino tilts the reader into a schizophrenic questioning of identity, it is easy to forget how the story started: a common, two-bit crime in a McDonald’s. The ease with which Hoshino leads Hitoshi—and the reader—into a vertiginous alternate reality is so seamless that the novel requires a second read to fully appreciate its nuances. A testament to Hoshino’s imagination and ambition, ME is a delightfully surprising and bizarre story which develops into a masterful interrogation of how individuals and families come to terms with themselves in an ever-evolving society that is often just as confused as the people themselves.