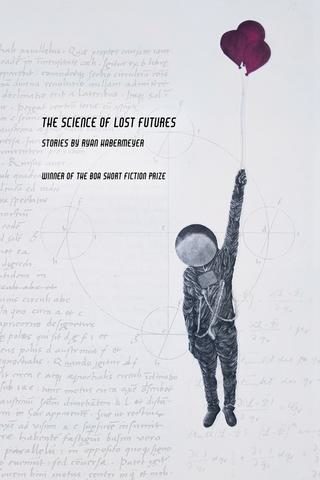 The Science of Lost Futures

Mark Twain famously wrote that “truth is stranger than fiction, but it is because fiction is obliged to stick to possibilities.” It is as if Ryan Habermeyer, author of the BOA Short Fiction Prize-winning collection of stories The Science of Lost Futures, took this as a personal challenge. Habermeyer does not bother to stick to realistic possibilities, opting instead to stretch our capacity of acceptance.

Part fantasy satire and part sci-fi fairytale, the stories in this collection are, at face value, completely absurd. A giant foot washes ashore near a small town; a woman’s womb falls out of her body and proceeds to flop and squeal around the house; a mother contracts a rare disease that makes her think she’s a snow leopard; a boy adopts a pet Nazi. Twain himself would have to admit that reality can’t compete with such strangeness. Despite the hilarity of the stories, they are not absurd for absurdity’s sake—the outlandish premises provide emotionally subversive juxtapositions.

The story from which the book’s title derives is a case in point. In “A Genealogical Approach to My Father’s Ass,” Habermeyer traces his family lineage of the rear, beginning in the 1700s when “Olaf Haber, respected oat farmer, ate raw human buttocks.” Olaf’s grandson Heinrich suffered from “debilitating hemorrhoids” and was cured only by being shot—in the butt, of course. Down the family line was a minister who was regularly spanked with a Bible as a child, and who as an adult spoke so powerfully that “you felt it tingling in your sphincter.”

The story is puerile fun, but the tone dramatically shifts when it gets to Habermeyer’s senescent father:

Yesterday, I felt my father’s ass. I was helping him use the toilet. He no longer remembered how. He wrapped his arms around my neck like a baby baboon while I wiped. It did not feel like [ … ] the ass that fidgeted nervously on the hospital chair as he held me the night my asthma wouldn’t let me breathe.

In a few sentences, sophomoric jokes turn to a piercing meditation on how to cope with a father’s mortality. Habermeyer’s ridiculous premises disarm, leaving readers vulnerable to heart-wrenching emotional crescendos.

Habermeyer is a scholar of fairy tales, and the influence shows. Though the magic in The Science of Lost Futures is packaged as science fiction, and thus manifests differently than in traditional fairy tales, there is an essential similarity: Habermeyer’s stories, like all timeless fairy tales, use their fantastical elements to reflect our deepest anxieties and most wondrous dreams.

Beyond the cross-pollination of genres, the narrative style of these stories is fresh and original. They aren’t driven by plot so much as ideas, expressed through impossibly illogical circumstances to which ordinary characters hopelessly and hilariously try to apply logic. How they navigate their situations brings ruminations on larger aspects of life: family, belief, tragedy. Yet the most common guest on Habermeyer’s examination table is perhaps the most enduringly mysterious human experience: love.

In “Everything You Wanted To Know About Astrophysics But Were Too Afraid To Ask,” a man falls in love with a woman who is becoming a black hole. “And yes,” he explains, “there are things you can do with a black hole you can’t with a regular woman, but this is hardly the place to discuss such affairs of the heart.” The woman starts to collapse in on herself, as black holes are wont to do, causing the man to admit that he “loved [her], but didn’t want to be a part of her.” The story reflects on the idea of love versus the reality of it, and the absurdity of the relationship questions the familiar territory of love stories: if not even light can escape the pull of a black hole, how can love transcend the inevitable, fatal loneliness of death? “That is romance,” the man states. “Sooner or later we’ll all be alone, stretched too thin and staring at what used to be the edge of our lives.”

In “The Fertile Yellow,” superstition takes over science in the attempt to understand love’s mysteriousness. A couple, desperate to bring life into the world and back into their relationship, turns to a fertilization guidebook from the 1800s. The book instructs them to take raw honey enemas, squeeze grapefruits over their house, and wash their bedsheets with coyote urine to increase their odds of conception. After an incident at a grocery store leaves the man crusted from head to toe in egg yolk, he sees that no book is practical enough to salvage their relationship: “Nobody tells you how to hug a naked wife who can’t get pregnant. Nobody tells you how to keep a marriage going when you’re both empty vessels with so much dead-end love. Nobody tells you how to come to terms with being what you are.”

This is where the cross-pollination of scientism and mysticism vaults into something more than stylistic flourish: even humanity’s best intellectual tools for understanding life ultimately arrive at the same unexplainable dead ends as a belief in magic. Yet where there is cynicism and foolishness, there is also something noble and inescapably human. Habermeyer doesn’t exactly end on “happily ever after,” but more often than not his brand of fairy tales conclude with acceptance, if not hope.

Fantasy writer China Miéville has said that “Part of the appeal of the fantastic is taking ridiculous ideas very seriously and pretending they’re not absurd.” But Habermeyer doesn’t pretend; he relishes the ridiculous to question the familiar in unfamiliar ways. After all, what is more hilariously and tragically absurd than simply being a person in the world?

In prose that is both eminently readable and reliably beautiful, Habermeyer uses laughter to make you think, thoughtfulness to make you laugh, and all of this to make you feel. The Science of Lost Futures is stranger than truth, and likely stranger than most works of fiction, too. But beneath its disarming charm and evocative imagination is a big beating heart.